In Buenos Aires, the last round for "Hebe", pioneer of the Mothers of Plaza de Mayo

She came for the last time, on November 10, authorized by her doctors despite the fragility that took her away ten days later, at 93 years old. 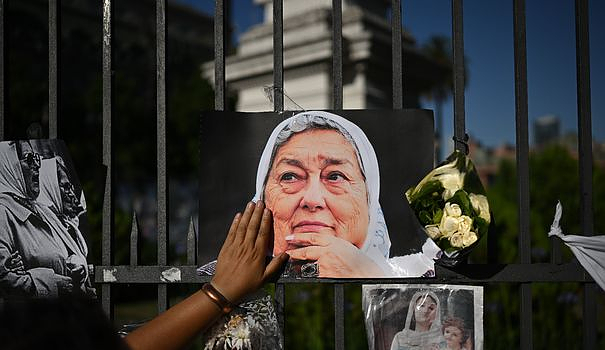 She came for the last time, on November 10, authorized by her doctors despite the fragility that took her away ten days later, at 93 years old. "Because they know it's good for my health, that I need the Place to take care of myself," she smiled then.

On Thursday, five of her colleagues -- Visitacion, Josefa, Irene, Sara, Carmen -- among the last of an aging army, the white scarf as always tied on the head (symbolizing the nappies of missing children) laid their ashes on a square of greenery, at the foot of the obelisk in Plaza de Mayo, facing the Presidency.

"30,000 times thank you!" (for the 30,000 disappeared or killed under the dictatorship, according to NGOs), "If there is a fight, there is hope", "Our fight has no expiry date"... Banners, placards, Messages hung on the railings of the obelisk echoed Hebe's words, expressed gratitude for his tireless fight.

Hebe de Bonafini was 39 years old when in 1977 the "Guerra Sucia" (Dirty War) of the dictatorship turned his life upside down. His sons, Jorge, Raul, were abducted a few months apart, then Jorge's wife in 1978.

Distraught, Hebe then saw a mother of a missing person offering her to join a rally in front of the Pink House, the seat of the Argentine executive power. Beginning of a fight that only death, she said, could stop.

And for more than 40 years, every Thursday at 3:30 p.m., "Mothers" and sympathizers circled around the obelisk, as the quest for the missing continues.

Thursday was the "March N.2328", and after the scattering of the ashes, the "Mothers" briefly turned, on foot, transported for the most frail. Then thousands of people took a circuit, widened for the occasion to the large neighboring avenues.

In the crowd, a militant atmosphere, embodied by many elected officials or Peronist organizations, but also anonymous people with red eyes, including many contemporaries of the fear under the junta (1976-1983), and the first "rounds" of Hebe.

"For me Hebe is a heroine," Virginia Garcia, 42, of the Barrios de Pie association told AFP, "because looking for the missing is something that few people dared to do."

"This fight is not over, it is eternal because there is still a lot of pain. It does not heal, it is an open wound", assures Martha Cervantes, 77, whose boyfriend is one of the missing. "But we have democracy thanks to these women. To all of them."

Because of course, there were the "dissensions", the controversies around Hebe, to the very politicized association (blindly pro-Kirchner), branching off towards the denunciation of all types of oppression, and split from the "Mothers of the Place of May-Founding Line".

There was his defense of the Chavez and Maduro regimes in Venezuela, his reaction without empathy to September 11, 2001, the procedure for embezzlement of funds at his foundation....

But not enough to sully his pioneering struggle, the challenge to the junta. "What we celebrate today is her legacy. Hebe was a great fighter, very frontal. She did not back down from anyone," remembered Angela Cardella, 82, who spent the dictatorship in "internal exile". in a village far from Buenos Aires, to escape the fate of the "subversives".

Hebe "said that she had lost everything (her children), and therefore had nothing more to lose", added Angela, who had often come over the years to walk alongside the "Mothers".

“Our children gave birth to us,” summed up Hebe de Bonafini to explain his struggle, which continues, in one form or another. Dictatorship trials are underway, as is the search for babies "stolen" from missing prisoners.

"The struggle of the Mothers will continue because there are a lot of young people in the human rights movement, and they will continue on the path," reassured Maria Esther Garcia, 81, on Thursday. "But Hebe was fundamental."