Convinced of the merits of the short circuit, a Brussels company recycles beer residue and unsold bread to grow exotic varieties of mushrooms. 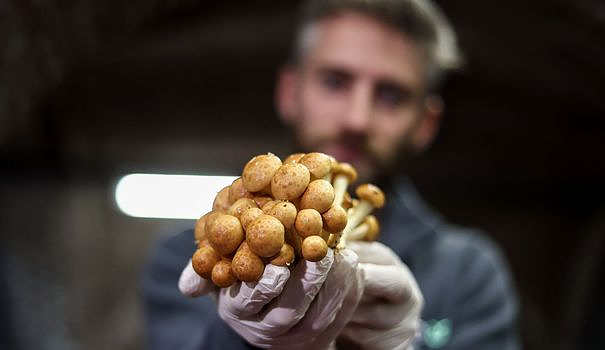 Convinced of the merits of the short circuit, a Brussels company recycles beer residue and unsold bread to grow exotic varieties of mushrooms.

The mushroom house is located in the heart of the huge cellars of the former slaughterhouses of Anderlecht, which formerly hosted exhibitions and techno evenings.

Strolling under the red brick vaults, Quentin Declerck supervises the grinding of baguettes and dry breads, used in the mixture intended to form the substrate, the base allowing mushroom seeds to grow.

"Beer and bread do not change the taste of mushrooms, but we have better results in terms of quantity and quality", explains the co-founder of Eclo, who has worked for several years with the Belgian brewery Cantillon and the Colruyt and Bon Pain supermarkets to recover the raw material from the substrate.

These partnerships have made it possible to recycle in 2021 more than 18,000 kilos of unsold bread and 5,000 kilos of spent beer – residues from brewing – while Belgians waste around 37 kilos of food per person each year, according to the latest figures from WWF Belgium.

Aligned on shelves installed in cold rooms, in a smoky and humid atmosphere, the substrates give mushrooms after one to three months.

Seven varieties are cultivated by Eclo, mainly exotic species, traditionally produced in Asia, such as shiitake, maitake or even pom-pom, a mushroom vaguely resembling a cauliflower.

Mushrooms still little known, at a price a little higher than the average: a box of 750 grams is sold for 22 euros on the Eclo site. “There is a real interest in rare varieties of mushrooms”, assures Quentin Declerck, who produces between eight and ten tons of these mushrooms per week.

In addition to the economic interest of reusing waste, Eclo is also part of a more ecological approach to food production in cities.

"We realized that the mushrooms in trade came from the Netherlands, many from Eastern Europe and often even further afield, from China", explains Quentin Declerck. "Today there is a certain production that has relocated well. We are part of this movement."

Launched in 2014, the idea of ​​Eclo came, according to its founders, from reading a book dedicated to short circuits and the circular economy, in which the author evoked the possibility of producing substrate from coffee grounds.

A technique already used by another Brussels company and tested in the Anderlecht mushroom farm in its early days. “It was a bitter failure”, Quentin Declerck laughs today, “shiitake does not grow on marc at all”.

The company claims to have trained around thirty people in the use of beer and bread to produce mushrooms, with contrasting experiences.

"Some have given up," explains Quentin Declerck. "It's still agriculture and it's hard, we work in very humid greenhouses, sometimes we don't see the sun of the day".

Competition from big producers also sometimes frightens amateurs: "You have to manage to get by with market prices, otherwise you won't sell. We have found our niche, so we manage to pay people correctly, but a lot projects do not pay", explains the co-founder of Eclo.

Other raw materials have been tested in the mushroom house, such as the formation of substrate on cocoa beans. Eclo is also looking to expand and is preparing a substrate factory project for the European market.

In Belgium, the number of companies active in the circular economy increased by 35% between 2019 and 2021, according to figures from a study published by the Belgian start-up Inoopa in April 2022.

Encouraging figures but there is still a long way to go: a survey commissioned by the Walloon region (French-speaking Belgium) thus revealed last spring that 60% of the 2,500 regional companies questioned were "not at all" familiar with the concept of circular economy.