In Brittany, wind of sling against the farm with 12,000 pigs

"For agriculture on a human scale", proclaims a large sign, placed at the end of the tourist route of Landunvez, a small town in northern Finistère known for its magnificent wild coast. 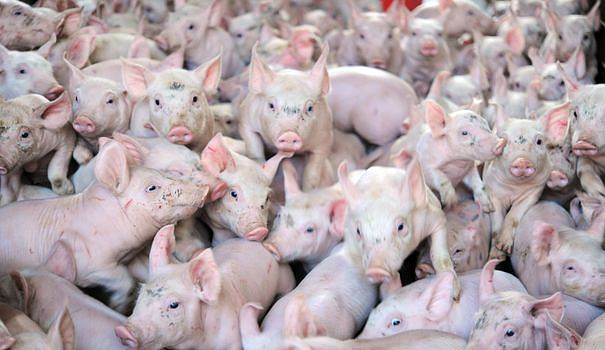 "For agriculture on a human scale", proclaims a large sign, placed at the end of the tourist route of Landunvez, a small town in northern Finistère known for its magnificent wild coast.

Gathered around the two camping tables, the walkers bend down to sign a collective complaint while a glass of "peasant soup" is served to them by an activist.

"This summer, we weren't able to swim with my grandchildren because the beach was closed. It's still unpleasant", laments Christine Douillard, a 70-year-old retiree, who lives in a housing estate in the middle of the fields of maize, where pig manure is spread.

"Because of the smells, we have to bring in our sheets which are drying. Otherwise, we sleep in the poop!", she says.

"We are not against the pig", specifies her husband Roland Douillard, 71 years old, white beard and black cap. "But the problem is the excess of pigs!"

In their sights: the "megapig" Avel Vor ("wind from the sea" in Breton), whose large blue silos are visible from the town of Landunvez, less than 300 meters away.

The affair has divided the Breton commune since in 2015, the manager Philippe Bizien asked to expand his farm to 12,000 pigs (an average farm has around 1,400).

A public inquiry was therefore launched, but the commissioner-investigator issued an unfavorable opinion on this extension, citing the "numerous nuisances" felt by local residents.

Ignoring this opinion, the prefect of Finistère however authorized the breeder to expand his facilities in April 2016, which he did immediately.

It was then that the case was taken to court by several associations, including Eau et Rivières de Bretagne, which attacked the decree to oppose this "megapig".

Closed beaches, degraded water, air pollution: the fumes from pig manure risk, according to these opponents, being added to those of neighboring farms, further degrading the environment of the municipality of barely 1,500 inhabitants.

Because in this country of Léon, the pig is king: the production exceeds in places 3,000 pigs per km2 in a region, Brittany, which is placed in sixth European position for the size of its pig herd.

With 7.3 million pigs in 2021, the Breton peninsula has more than half of the French livestock on only 5% of the territory of France. There are thus more than two pigs per Breton.

"In Landunvez, we are more at 10 pigs per inhabitant", rectifies Laurent Le Berre, president of the Association for the protection of the coast of legends (APPCL).

In May 2019 and November 2021, the opponents won their case before the administrative justice. But the pigsty has already been extended and produces 27,000 meat pigs per year, under a provisional prefectural authorization.

To regularize the situation, a new public inquiry, carried out in the spring of 2022, this time concluded with a favorable opinion, despite the warnings of the Environmental Authority on the "generally very high ammonia emissions" from the various farms in the territory. which contribute to "the degradation of air quality by the formation of fine particles".

The Departmental Council for the Environment and Health and Technological Risks (Coderst) must now consider the file before the final decision is made by the prefect.

"The extension file ticks all the boxes of the regulations in force", considers Jean-Alain Divanac'h, pig breeder and president of the FDSEA of Finistère, denouncing an "ideological debate".

"The opponents cannot demonstrate that the pollution comes from the Avel Vor breeding farm," he points out.

Mr. Le Berre promises him new remedies in the event of regularization of the exploitation. "It could still last 10 years!", he says.

Contacted by AFP, the prefecture and Mr. Bizien did not wish to speak immediately.