A thousand people had gathered on Paulista Avenue, emblematic of the economic capital of Brazil, hoping to celebrate Lula's victory in the first round. 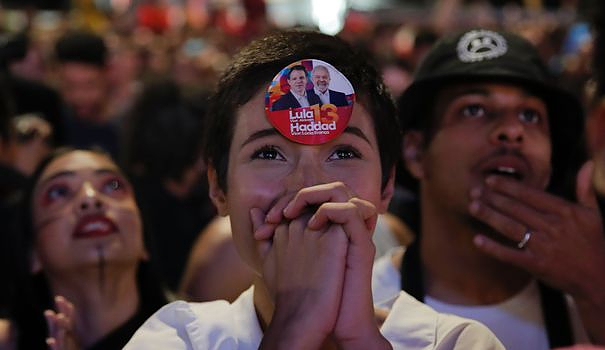 A thousand people had gathered on Paulista Avenue, emblematic of the economic capital of Brazil, hoping to celebrate Lula's victory in the first round.

But Jair Bolsonaro, 67, the outgoing far-right president, did better than expected, with 43% of the vote, against the 48% of Luiz Inácio Lula da Silva, 76, icon of the Brazilian left. A gap of about six million votes, according to almost final official results.

"The number of votes for Bolsonaro is surprising. For them, it's good, for us it's the worst that could happen," José Antonio Benedetto, a 63-year-old civil servant, told AFP. "I don't know what is happening in Brazil, 50% of our population is sick. Only Lula can cure this, vaccinate our people".

Wearing the red shirt of Lula's Workers' Party (PT) who governed Brazil for 14 years, he smiles as he says he is certain that the voters of the candidates who came in 3rd and 4th position, Simone Tebet (MDB, center right) with 4% and Ciro Gomes (center left PDT) with 3%, will vote Lula.

"I was hoping Lula would win by a big margin in the first round, but I think the difference is enough (to win the waiver) because there are still a lot of people who didn't vote for him," adds Clarice Navas, a 36-year-old filmmaker, alongside her husband, with their two-year-old son in a small black car.

Despite the hopes displayed to see Lula in power for the third time, after his two terms (2003-2010), the results weigh on the atmosphere. Participants chat in low voices as they stock up on beer and food from street stalls. The joy they expected the day before seems a long way off.

At a corner of Paulista Avenue, guarded by police, mounted agents and anti-riot forces, a woman multiplies her prayers to keep "Satan" away.

"Fiu, fiu, Bolsonaro is not welcome here," she says.

In the cool of the night, the atmosphere changes when the loudspeakers start spitting out music. The flags, mostly red, begin to wave and we dance to the sound of songs "thirteen, thirteen, thirteen", Lula's code in the electronic ballot boxes.

A man responsible for giving instructions from the top of a truck asks that no one feel "dejected" and that everyone goes to bed later as winners.

In the middle of the evening, Lula arrives to thank his supporters. "I have never won an election in the first round, it seems that fate asks me to work a little more," he told them to applause.

"We have to be optimistic, and a lot. I thought we were going to win in the first round, but let's go," smiled Lucía Carvalho, a 39-year-old domestic worker.

Away from the crowd, architect Alex Matos seems absorbed in thought.

"What was scary was the difference with the polls concerning Bolsonaro, how he managed to reduce the margin," he explains. "We remain optimistic, resistant, to win in the second round, but it's a battle that will be difficult and quite exhausting because it was already exhausting".