It is on November 9 in Toulon that the Head of State will set the course for the future military orientation law for the period 2024-2030. 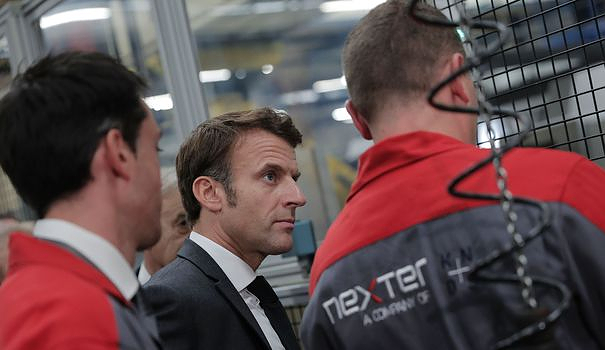 It is on November 9 in Toulon that the Head of State will set the course for the future military orientation law for the period 2024-2030.

While waiting for these announcements, he went to Cher to illustrate an army and an armaments industry which, with budgetary support, must adapt to the return of war to the gates of Europe.

The focus is therefore on the Caesar, 18 of which have been sent to Ukraine and six others could follow soon.

In a test center of the General Directorate of Armaments, Emmanuel Macron inaugurated the renovated firing point of this flagship of French artillery, in the absence of photographers and cameras.

After having closely observed this imposing cannon mounted on a truck, everyone is sheltered: the test only takes place once the staff - and the president - are duly locked up in the cramped firing PC.

From there, the "inert" shell is triggered remotely and the presidential delegation can follow the detonation and the trajectory on screens.

Then head to the Nexter Arrowtech site, in the neighboring town of La Chapelle-Saint-Ursin, where the 155 mm shells are produced for the Caesar guns, themselves manufactured in Bourges. Before visiting, away from the media, the MBDA Subdray factory which is responsible for the engineering and testing of missile propulsion means.

In front of the leaders of Nexter, while the assembly lines are humming, the head of state - and of the armies - wants to know if it is possible to accelerate the production rate.

Because that is one of the nerves of this war.

At the Eurosatory defense fair in June, Emmanuel Macron had recorded the "entry into a war economy" that would have to be "sustainably" organized, involving profound changes.

If Paris began in 2017 a clear increase in defense credits after years of scarcity, the Russian invasion of Ukraine, and the need to supply weapons to kyiv to resist in the long term, implies going "more faster, stronger, at the lowest cost," he explained.

Since the summer, the Ministry of the Armed Forces and manufacturers have been working on this effort to "produce enough, more quickly and at controlled prices", as the Elysée recalled.

An objective which concerns weapons, but also ammunition: it is a question of supplementing the stocks more quickly to replace the guns and other systems sent to the Ukrainians, of producing missiles and shells, which leave much more quickly than expected, at the rate of conflict. And to ensure that the French army remains ready to face, itself, possible conflicts of "high intensity".

In the morning, President Macron had a long discussion with the students and trainers of the Technical Preparatory Military School of Bourges, which opened its doors at the beginning of the year to, according to the Elysée, "respond to a growing need for non-commissioned officers in technical trades".

To these young high school students aged 16 to 18 who have chosen the path of maintenance of the Army's air resources, Emmanuel Macron, in a hangar where two Puma SA330 helicopters are deployed, says his "pride".

"The trades you have chosen are very important," he slips. Despite their "technical" aspect, "there is an organic link with those who will then risk their lives" and "put their lives in your hands", adds the president.

"We are going to need you, you are right to get involved because the world" will "be even more demanding", he says in front of a dozen students, promising to continue training and investments.