In Belgium, storing electricity to manage peaks and save the climate

Well hidden behind a grassy embankment, the site connected to the public network now contributes to Belgium's electricity reserve, and thus to regulate the frequency on the European network, which is all interconnected. 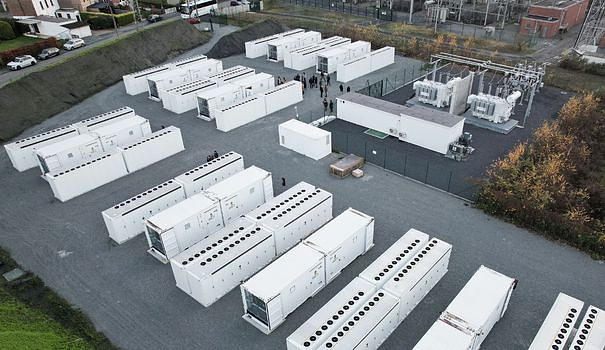 Well hidden behind a grassy embankment, the site connected to the public network now contributes to Belgium's electricity reserve, and thus to regulate the frequency on the European network, which is all interconnected.

With its 100 megawatt-hours (MWh) of storage equivalent to the needs of 8,000 households, it fulfills a stabilization function still largely provided today by oil or gas-fired power stations.

To get out of fossil fuels, "battery storage is crucial because it makes it possible to better integrate renewable energies, by mitigating the negative effects of their intermittency", and by optimizing infrastructures, explains Jean-Philippe Deckers, head of Elia, the operator of the Belgian high-voltage electricity network.

"It will have a major role to play in the energy transition, and is part of our vision," he added, inaugurating the premises Thursday in Deux-Acren, between Brussels and Tournai.

Attached to a high-voltage line, the 40 containers filled with Tesla lithium-ion batteries produced in Nevada, store and retrieve electricity from the network, on demand.

Lithium-ion technology was chosen for its maturity, explains Michael Coudyser, managing director of Corsica Sole, a pioneer player in photovoltaics and storage, which designed and operates this site: "we know that these batteries will last at least ten years".

Noise-reducing embankments protect neighbors from the drone of fans. A lesser evil "next to the aircraft engine" that had to be operated to mobilize the adjacent fuel depot, he says. This tank must be deposited soon.

- Key to the transition -

"If we want to separate from gas, which makes the price of electricity explode, we need storage", underlines Mr. Coudyser, who recalls here a particularity of the European electricity market, whose prices are today hui linked to those of gas when demand is strong.

But beyond that, storing and retrieving electricity will be one of the major subjects of the energy transition because it will determine the development of renewable energies, by smoothing their variations in power within the same day, when a cloud passes overhead. of the field of solar panels or that the wind slows down...

Storage also makes it possible to conserve the energy produced at times of low consumption and to reinject it at times of high demand. Ditto over a week, to store it on Sunday, a day of lower consumption.

Great Britain, an island that relies heavily on green energies, has understood this well, and is very advanced in storage.

“A world without fossil fuels is necessary and a 100% renewable world is possible. But if we want a lot of renewable energy, we will also need a lot of storage,” summarizes Mr. Coudyser.

But it is expensive: 33 million euros for the Deux-Acren site, 80% of which for the batteries, financed without subsidies. It will take about 7 years to make it profitable, with sales on the electricity market.

To be able to build it in less than a year, the management company Mirova, a subsidiary of Natixis-BPCE specializing in sustainable development and already a shareholder of Corsica Sole, advanced the sum, before the arrival of the Edmond de Rothschild bank.

"The needs to develop renewables have never been so immense in this period of energy crisis, of the need for energy sovereignty and the fight against climate issues, and this will not be done without major investments", comments Raphaël Lance, by Mirova.

However, there is no question at this stage of considering storage in this form of volumes that are too large: too expensive, underline the energy players, who are rather betting, like Corsica Sole, on hydrogen to be able to store more massively the energies coming from the wind and the sun.