Rainy morning in Giromagny, near Belfort. 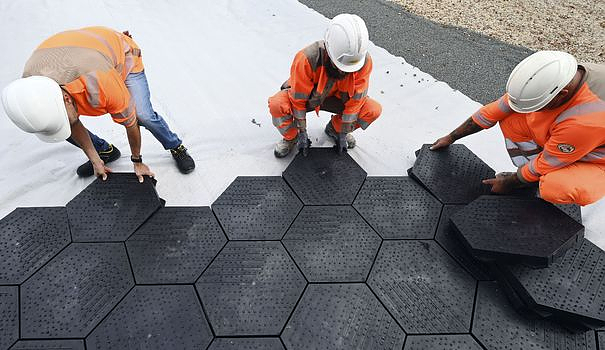 Rainy morning in Giromagny, near Belfort. Workers are busy near a primary school whose parking lot they are redoing. But here, no bitumen, the town hall has opted for the slabs of the local company Purple Alternative Surface: large black hexagons of five kilos each, placed on a terraced floor. The easy assembly gives the impression of a giant puzzle looking like a honeycomb mesh.

Special features of this slab, called "Purple Solo": permeable to rainwater, it is entirely made of hard plastics, normally intended to be buried or incinerated. With it, exit the macadam, synonymous with the artificialization of the soil and which does not allow the rain to pass.

"There is a space of 5 millimeters between each slab which will let the water seep into the ground", explains Pierre Quinonero, co-founder and commercial director of Purple Alternative Surface. The start-up, created in 2019, is based in Cravanche, in the suburbs of Belfort, where it has six employees.

In addition, the plates are hollow and can retain 40 liters of water per m2, then gradually returned to the ground, continues Mr. Quinonero.

To recover plastics, an agreement has been made with waste collection centers in neighboring Haute-Saône "where we recover rigid plastics" (toys, basins, etc.), then transformed "into raw material to make our slabs", explains this former motorcycle driver, short-lived leader of the Paris-Dakar rally in 2001.

"Rigid" which are part of "three million tons of plastic which, each year, are not recycled because it would be too complicated or too expensive", he notes in passing.

Once collected, the plastics are processed by Plaxer, a partner of Purple Alternative Surface, specializing in the manufacture of plastic products and based in Rumersheim-le-Haut (Haut-Rhin), about sixty kilometers northeast of Belfort.

“Our network covers 100 km around, between Haute-Saône and Haut-Rhin, from collection to the production of the slabs”, slips Pierre Quinonero.

On a single line, the plastics are melted and injected into the mold which will give them their final shape.

"Today, we pollute a lot with plastic waste", recognizes Bruno Caudron, the technical director of Plaxer. This company of 35 employees "is a major player in the world of plastics, we produce a lot of parts for the automobile. We wanted to make our contribution to the recycling of waste, we want to ennoble our core business, that's why we decided to accompany Purple", he explains.

Plastics, the basic ingredient of which is oil, are indeed regularly singled out for their polluting action, like the micro-plastics that invade the planet, from the oceans to the summits of mountains. And while recycling clearly has its virtues, it also has its limits, with the industry continuing to massively produce new plastics.

- "Weighing in on the ecological transition" -

Pierre Quinonero still wants to believe in the ecological virtues of the "Purple Solo": "We really want to influence the ecological transition. Every time we make three parking spaces (with these tiles), we manage to recycle a ton of plastic," he said.

Not to mention that the "Purple Solo", whose lifespan is estimated at 30 years, is almost "infinitely" recyclable: "We have a deposit system: when we sell a car park, we recover the damaged tiles for use them again to make new ones".