In Australia, 230 cetaceans wash up on a beach, half of them presumed dead

Aerial images revealed that dozens of marine mammals were scattered along a wide sandy beach in contact with the cold waters of the Southern Ocean. 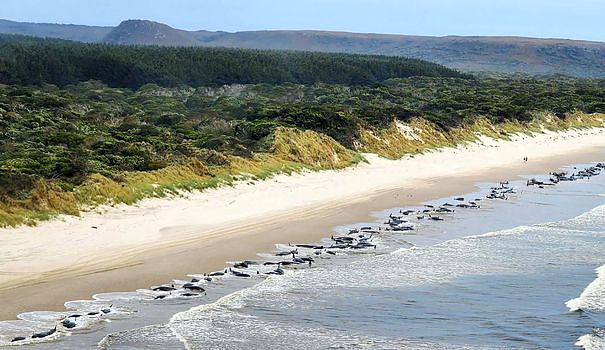 Aerial images revealed that dozens of marine mammals were scattered along a wide sandy beach in contact with the cold waters of the Southern Ocean.

Locals covered the surviving animals with blankets and doused them with buckets of water to keep them alive, while other cetaceans nearby tried in vain to extricate themselves, and others lay dead.

The cetaceans "stranded near Macquarie Harbour", the Tasmanian state Department of Natural Resources and Environment said.

"It looks like about half of the animals are alive," he added.

Authorities said marine conservation experts and a team with cetacean rescue equipment were on their way to the area.

They will attempt to refloat animals that are capable of surviving and will likely transport the carcasses offshore, to avoid attracting sharks to the area.

Almost two years ago to the day, the area was the scene of another mass stranding, involving nearly 500 stranded pilot dolphins.

More than 300 of them then died, despite the efforts of dozens of volunteers who struggled for days in the freezing waters of Tasmania to free the animals.

The reasons for these large strandings are not fully known.

Researchers have suggested they could be caused by groups of cetaceans straying after feeding too close to shore.

Pilot whales being very social animals, they can follow members of their group who get lost and find themselves in danger.

This sometimes occurs when old, sick, or injured animals swim to shore and other cetaceans in the group follow them, attempting to respond to distress signals from the trapped animals.

Other researchers believe that gently sloping beaches - such as those found in Tasmania - interfere with the sonar of pilot dolphins and trick them into believing they are offshore.

This event occurred a few hours after a dozen young sperm whales were found dead, also stranded, on King Island, between Tasmania and mainland Australia.

The cause of the death of the sperm whales could be a "misadventure", as biologist Kris Carlyon of the conservation agency of this island state evokes with the local newspaper Mercury.

This is "the most common reason for strandings", he explains. "They may have been looking for food near the shore ... they may have been caught at low tide," Carlyon said. "That's the theory for now."

Some 300 animals are affected each year, according to official data, and it is not uncommon for the same stranding to involve groups of 20 to 50 pilot dolphins.

A single stranding can also involve several hundred animals when a large group of marine mammals is involved, as was the case in 2017 when 700 pilot dolphins stranded together on the New Zealand coast.