In a wheel factory, produce at night to avoid power cuts

Outside the building, a screen indicates the level of energy consumption the day before and congratulates the teams on their efforts. 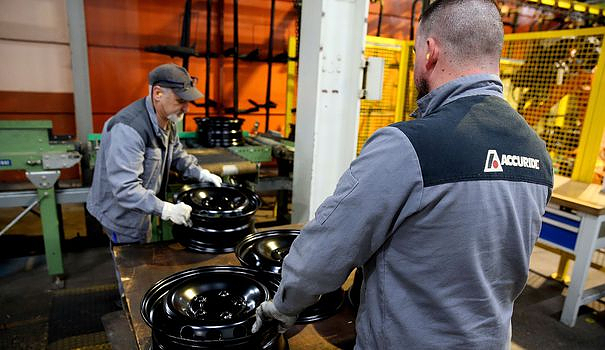 Outside the building, a screen indicates the level of energy consumption the day before and congratulates the teams on their efforts.

From the Chapelle-Saint-Luc hangars, steel wheels for light commercial vehicles and passenger vehicles come out, as well as metro wheels for the whole world.

Machines unroll gigantic coils of sheet metal there, while wheel rims circulate on conveyor belts like on so many interconnected highways.

The 240 employees of the Accuride Wheels Troyes site - a subsidiary of the American industrial giant Accuride - usually work in two shifts (2X8) from 5:00 a.m. to 9:00 p.m.

But, since November, the production lines have been running for three weeks from 1:00 p.m. to 5:00 a.m., a rhythm which will also be imposed in mid-December and in January.

"We have voluntarily shifted our production in order to erase 3.6 MWh of consumption from the national need, during the morning peak from 8:00 a.m. to 12:00 p.m.", "this is the equivalent of the consumption of 1,000 households", indicates Hugues Dugrés, general director.

The management relied on the analyzes of the electricity transmission network operator, RTE, noting the periods of voltage supply on a national scale.

Depending on future estimates from RTE, "it is possible that we will still shift to January or February", anticipates Hugues Dugrés.

In addition to the record surge in prices, French electricity production is historically low because nearly half of the nuclear reactors are shut down.

Other industrial sites, Toshiba in Dieppe or Setforge and Ascométal in Lorraine, have or will reorganize their production, according to franceinfo.

At Accuride, the motivation is not pecuniary, insists Mr. Dugrés, for whom the reorganization reflects a "social responsibility" and a concern to protect the industrial tool.

Behind him, a stamping machine producing metal parts from a thin sheet of sheet metal: "In the event of a sudden disruption of supply, it could remain blocked for several hours or even days, we cannot take this risk" .

But the sum is partly reabsorbed by wage increases for night work, says Alexis Beck, energy manager for the Trojan site.

- "Not necessarily the choice" -

"Electricity is our third historical cost item in our manufacturing", after steel and wages, but "this year energy will certainly reach the equivalence of the wage bill", he indicates.

"Working at night, when it's been years since you've done it, it's hard," says Nicolas Godard, substitute producer on a line that prepares the steel discs.

"The night bonus, it's a little extra on the pay at the end of the month", recognizes however this father of two children. Especially since he found a free childcare solution, with a grandfather who “can watch the kids overnight”.

"I manage to understand that we are shifting our schedules to lighten the network a little, but that's always a little more stressful", also confides Antonio Garcia, repairman, for 22 years at Accuride.

For Didier Le Beller, FO union delegate, "everyone plays the game because we don't necessarily have a choice but it's not easy, there are people for whom it creates big problems" for life of family.

It amounts to around 120 euros gross at the end of the month, the benefit for the employees concerned.

This shift to night is part, according to EDF, of the formulas chosen by manufacturers to deal with the energy crisis.

RTE, for its part, indicates that it is working with companies to avoid cuts, with a panoply of “eco-gestures”.