In a Ukrainian trench, tips and tricks against the cold

"Winter in the Donbass is hell. 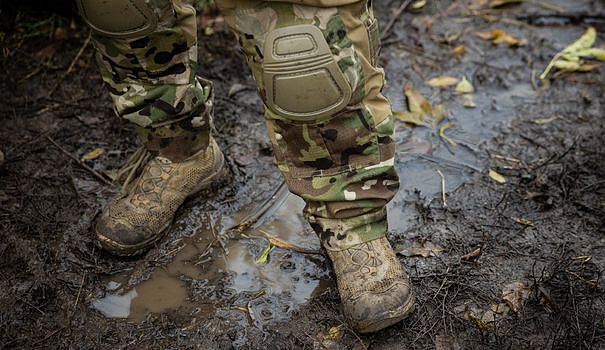 "Winter in the Donbass is hell. It's a steppe climate with freezing nights, temperatures down to -30°C," warns soldier Yuri Syrotiouk, 46, a former local elected official in the municipality. of kyiv, at the front since last February.

"There is no forest, the wind goes everywhere. I was there in 2014, it was unbearable", says the dean of the group.

On this stabilized part of the front, the enemy is very close and the firing regular, but life goes on in the maze of trenches.

These eleven soldiers of the 5th brigade, and their cat, John, live a full week on the trench, before being relieved.

One meter from the ground, the guys have built, thanks to an internet tutorial, a sauna which also acts as a hammam.

The 2m2 alcove, heated by a special wood-burning stove, is lined with silver-coloured insulating coating. The walls were also armored. An 82mm mortar can fall on it.

At the entrance, a barrel of ammunition serves as a "dressing room" for the soldiers who enter the "bania", the sauna, naked, and take the opportunity to wash.

"There you put water or snow in a bucket and here it makes steam", shows the soldier Syrotyuk.

"After staying in the slush, you come out as a new person," said the bearded man with a big smile.

All around the camp buried and hidden under camouflage nets, an ocean of brown mud, which sticks to the soles.

Before entering the living and kitchen trench, one wipes one's boots on a metal tube arranged for effect.

Once underground, the king of the trench is the "bourjouïka", the small traditional metal wood stove with a chimney.

We approach our hands, rarely gloved for practical reasons, which we then slip between the torso and the bulletproof vest.

It is also there, around the gas stove, that steaming and comforting tea or coffee is prepared.

At the end of the hose, filled with mud on the ground, inside the cavity also lined with insulation, where the soldiers sleep on mattresses, you have to take off your shoes.

A plastic thermometer decorated with pink flowers announces 22°C. Outside it's 5, on this misty late autumn morning.

The unit has received sleeping bags from volunteers that can withstand -30°C, explains Commander "Locha".

"With that you sleep in the snow", assures the soldier.

For clothing, the package includes a balaclava, special underwear, including tights and especially "tactical socks" to avoid the dreaded "trench foot", moldy foot, a First World War disease that can lead to gangrene.

"But what warms us even more than socks or sleeping bags to NATO standards are the words, calls and little drawings of our loved ones," says soldier Syrotiouk with a tender smile.