In a refugee camp in Jordan, a generation of Syrians born in exile 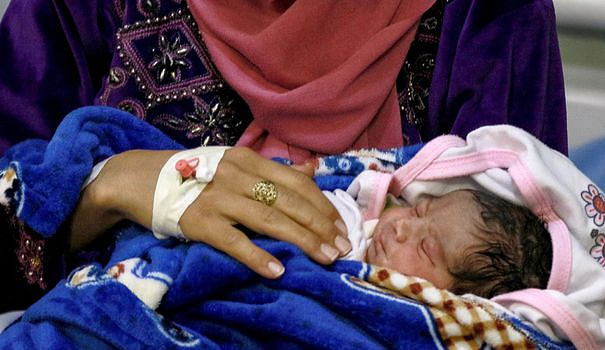 "I was hoping to be at home, in my country, but fate has decided that I will be here, that I will get married here and that I will give birth to my children here, far from my country," Hadil told AFP. 25, who prefers to use a pseudonym for security reasons.

Like most of the refugees in Zaatari, around half of whom are children according to the UN, Hadil and his family came from Deraa province, very close to the Jordanian border and the cradle of the 2011 uprising against President Bashar's regime. al-Assad.

The war has killed almost half a million people and displaced around half the population of pre-war Syria.

Hadil married a Syrian refugee who also lives in Zaatari. The couple already have two children, aged six and seven.

The United Nations refugee agency (UNHCR) has registered 168,500 Syrian baby births in Jordan since 2014. In total, Syrians in exile have given birth to around one million children during the same period.

Many of them are born into harsh conditions in overcrowded refugee camps, often with limited access to education with the threat of child labor and forced marriage hanging over them.

"My children grew up here. When they hear me talk about Syria, they ask me: 'Mom, where is Syria?'" Hadil explains, in the waiting room of the camp's only maternity unit.

"I try to explain to them that this is not our country. We are refugees. Our country is over there -- Syria. It's hard for them to understand," adds the six-year-old pregnant woman. month.

The UN counts 675,000 registered Syrian refugees in Jordan, but Amman puts the real figure at around 1.3 million and says the cost of hosting them has exceeded $12 billion.

Hadil says he does not dare to return to his country for the moment despite a decrease in hostilities, his cousin, who lived in Zaatari, having been killed less than a month after his return to Deraa, leaving his wife and five children in the camp. "The security situation is bad."

The UN-run clinic's maternity ward - the largest health facility in the camp - has 10 beds, half of which are occupied by women who have just given birth.

Midwife Amon Moustafa, 58, has worked at the facility since the camp opened in 2012.

"We deliver between five and 10 babies every day, and with today's five, the total number of births in the camp has reached 15,963," she said. "Look, I wrote it on the palm of my hand".

The clinic employs 60 medical staff, including four specialists, 21 midwives and seven nurses, as well as laboratory technicians and pharmacists.

"I know most of the women and children in the camp," adds Ms. Moustafa with a smile.

The director of the clinic, Ghada al-Saad, told AFP that the establishment "operates 24/7, offering everything free of charge, including medicines, treatments, tests and vaccines" until at the age of two.

Banners on the walls encourage mothers to breastfeed, and according to Moustafa, staff "try" to educate women about family planning and the use of contraceptives, although the latter remains limited.

In the waiting room, Nagham Chagrane, 20, carries in her arms her newborn baby, Zaïd, who is sleeping soundly.

She has lived with her family for nine years in the camp, where she married her cousin.

“At first, we were hesitant to have our first child,” she explains. "Everyone has the right to be born and live in their country, but what can we do?"

Children born in refugee camps in Jordan are registered by local authorities and can then apply for a Syrian passport at the embassy in Amman, according to UNHCR.

Emane Rabie, 28, is expecting her fourth child: "Children are a blessing, but I hope this will be my last pregnancy".

"My husband loves children. He says they are a blessing from God."

Rabie says the family home in Deraa was destroyed during the war and they have nowhere to go. "If we are asked to leave the camp and return to Syria, I will be the last to leave."