In a devastated Ukrainian village, winter adds misery to misery

Without this wood, Mr. 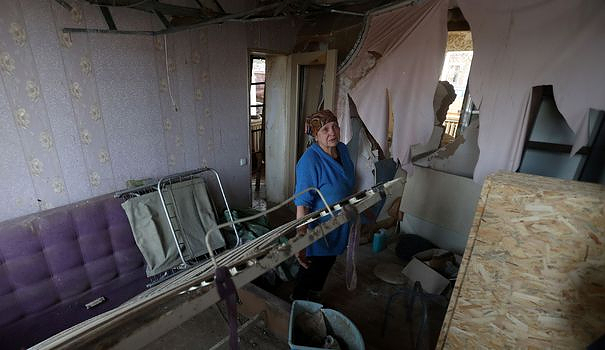 Without this wood, Mr. Khmil thinks he will probably freeze to death in the ruins of his village of Kamyanka.

“The hardest part is finding enough cut wood,” he explains. "There is a huge queue to get wood donated by volunteers."

With his house largely destroyed by shelling, Sergey Khmil is working hard to convert his summer kitchen into makeshift winter accommodation, now filled with blankets, ammunition crates and a stove assembled from Russian shell casings .

“I have to cover the walls with another layer of insulation,” he adds, looking at the modest room that he hopes will see him through the winter.

In March, the village was shelled and strafed by helicopters before infantry and tanks stormed the area as Russian forces advanced south from Izium during the early days of the invasion.

"They started breaking into garages and houses and partying drunk at night," says 53-year-old resident Volodymyr Tsybulya, during a break amid repairs to the roof of his home. sister. "They used to throw grenades for fun. I arrived home and found my bathroom destroyed by a grenade."

And that went on for months, until in September a lightning offensive by Ukrainian forces crushed the northeastern flank of the Russian army, routing its troops and sending them further east, distraught.

In the wake of the retreating army, a succession of villages were left in ruins, including Kamyanka, on the outskirts of Izium.

In the weeks since regaining control of the region, Ukrainian officials have struggled to repair the damage, while uncovering mass graves and taking stock of the damage suffered by the formerly occupied territories.

According to Mykhaylo Ishyuk, deputy mayor of Izioum, the situation is dire as winter approaches, with nearly 30 to 40% of the city's roofs destroyed by the fighting.

The lack of construction materials and equipment, as well as the shortage of manpower, make the necessary repairs all the more unlikely as the cold sets in.

Temperatures are expected to drop below zero in the coming days.

The situation in Kamyanka is even worse, he admits. Almost all the roofs of the 550 houses and buildings in the village were damaged or completely destroyed.

"We are monitoring the situation closely," added Mr. Ishyuk.

He points to the increase in power outages following waves of Russian attacks on infrastructure sites across Ukraine, which have left Izium and surrounding areas with less and less electricity and heating.

In Kamyanka, Lyubov Perepelytsya alternates between recounting the horrors experienced during the Russian occupation and sharing his fears about the coming winter. "They literally looted everything.

"It's such despicable behavior," the 65-year-old resident said in tears as she described the destruction of her home and the looting of her valuables. "How can you treat people in such a bad way?"

Most of the village's 1,200 residents have left the area, but Ms Perepelytsya and her sick husband will join a few dozen other people who have planned to winter in Kamyanka, come what may.

"I cried like a madeleine. This is our sixth place (during the war). It seems that the war follows us everywhere we go", she breathes. "I don't know how we can get out of this. I don't know."