The targeted asteroid does not represent any danger. 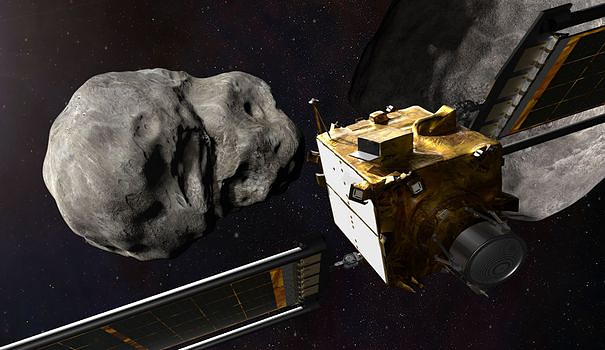 The targeted asteroid does not represent any danger. But the mission, named Dart, should "help determine our response if we detect an asteroid that threatens to hit Earth" in the future, NASA boss Bill Nelson said Monday.

The moment of impact, 11 million kilometers from us, can be followed live on the NASA video channel.

"We are changing the movement of a natural celestial body in space, humanity has never done this before," said Tom Statler, chief scientist of the mission. "It's something out of science fiction books, and Star Trek episodes when I was a kid. And now it's real."

It is on the little one, Dimorphos, that the ship must crash. This asteroid currently circles the larger one in 11 hours and 55 minutes, and the goal is to reduce its orbit by about 10 minutes.

The change can be measured by telescopes on Earth, observing the change in brightness as the small asteroid passes in front of the big one.

When will we know if it worked? "I would be surprised if we have a firm measure of change in less than a few days, and surprised if it took more than three weeks," said Tom Statler.

In the meantime, on Monday, the camera on board the ship, called Draco, will take one image per second. They will arrive on Earth with a delay of only about 45 seconds.

To hit such a small target, the ship will steer autonomously for the last four hours, like a self-guided missile.

He will target Didymos first, before Dimorphos appears.

The small asteroid, of which images have never been seen before, will initially be no larger than a pixel, before filling the entire frame -- until radio silence after the explosion.

The approximately forty people present in the control room of the Applied Physics Laboratory (APL) at Johns Hopkins University in Maryland will be ready to intervene if necessary.

Three minutes after impact, a shoebox-sized satellite, called LICIACube and released by the upstream craft, will pass about 55 km from the asteroid to capture images of the ejecta.

The event will also be observed by the Hubble and James Webb space telescopes, which should be able to detect a bright cloud of dust and thus help to assess the amount of material ejected.

All this should make it possible to better understand the composition of Dimorphos, representative of a population of fairly common asteroids, and therefore to measure the effect that this technique – called kinetic impact – can have on them.

Asteroids have held surprises for scientists in the past. In 2020, the American probe Osiris-Rex had sunk much more than expected into the surface of the asteroid Bennu. The porosity of Dimorphos is currently unknown.

“If the asteroid responds to the Dart impact in a completely unforeseen way, it could actually lead us to reconsider the extent to which kinetic impact is a generalizable technique,” ​​warned Tom Statler.

None of the known asteroids threaten Earth for the next 100 years.

Nearly 30,000 asteroids of all sizes have been cataloged in its vicinity (they are called near-Earth cruisers, that is to say that their orbit crosses that of our planet).

Those of a kilometer or more have almost all been spotted, according to the scientists. But they estimate that they only know about 40% of asteroids measuring 140 meters or more -- those capable of devastating an entire region.

"Our most important job is to find" the missing ones, said NASA planetary defense officer Lindley Johnson. The earlier they are detected, the more time the experts will have to put in place the best way to defend themselves against them.

But the Dart mission is a crucial first step, said Mr Johnson: "It's a very exciting time (...) for space history, and even the history of humanity."