These scenes are repeated by dozens this week around Cianjur, a city in the west of the Indonesian island of Java hit Monday by an earthquake that killed more than 268 people. 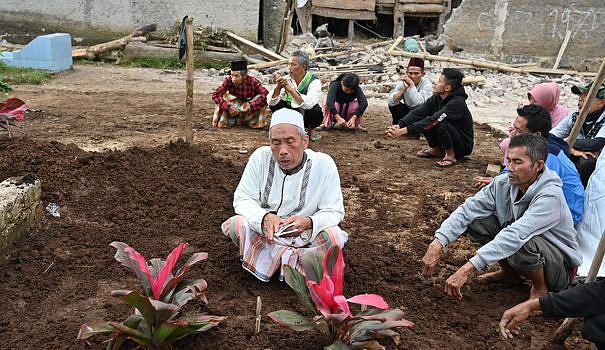 These scenes are repeated by dozens this week around Cianjur, a city in the west of the Indonesian island of Java hit Monday by an earthquake that killed more than 268 people.

As families retrieve remains from morgues, they bid farewell to loved ones affected by the earthquake in ceremonies quickly organized to conform to Islamic rites.

Husein, a 48-year-old construction worker, was building a house with three other men when the earthquake rocked his village on Monday.

Many buildings collapsed on their inhabitants and landslides buried other victims in this hilly region near the epicenter.

One of Husein's colleagues, who like many Indonesians only goes by a name, also perished in the disaster.

"It's a disaster," laments Yunisa Yuliani, the worker's 30-year-old niece during the funeral held on Tuesday in the village of Gasol, one of the localities that suffered the most damage.

"It's hard to look at his children, they are so young. They keep asking where their father is. How to explain to them?".

Several nieces cling to each other. A crying man is so affected that he has to be supported by two of his friends.

Observing the body of the deceased, brought back from the construction site five minutes away on foot, his sister is inconsolable.

"I just lost a brother 10 days ago to appendicitis and now I just lost another brother," said Husein's sister, Siti Rohmah, who is 43.

The construction worker leaves behind a three-year-old daughter who still doesn't fully understand that she has lost her father.

His eldest son, in his twenties, watches calmly as his father's grave is dug. Another seven-year-old son cries in the arms of a family member as neighbors begin the mortuary washing ritual.

Husein's wife was unable to attend the funeral as she works in Saudi Arabia.

"I still hoped" that he was alive, among the missing, says the sister. "I pray to God to recognize his good deeds and facilitate his journey" to the afterlife.

The body was laid on a tarp placed on the road. It is covered with a white shroud and traditional Indonesian batik cloth. A dozen men overlook it while saying prayers, following the rites observed in the country which has the largest Muslim population in the world.

When the remains are placed in the tomb, men chant prayers, others look down and meditate.

Bamboo stalks and banana leaves are then placed in the grave, before being covered with earth.