"I don't care about the acoustics in the Elbphilharmonie"

While many artists speak almost in awe of the unforgiving acoustics in the Elbphilharmonie, world star Robbie Williams takes this topic very calmly. 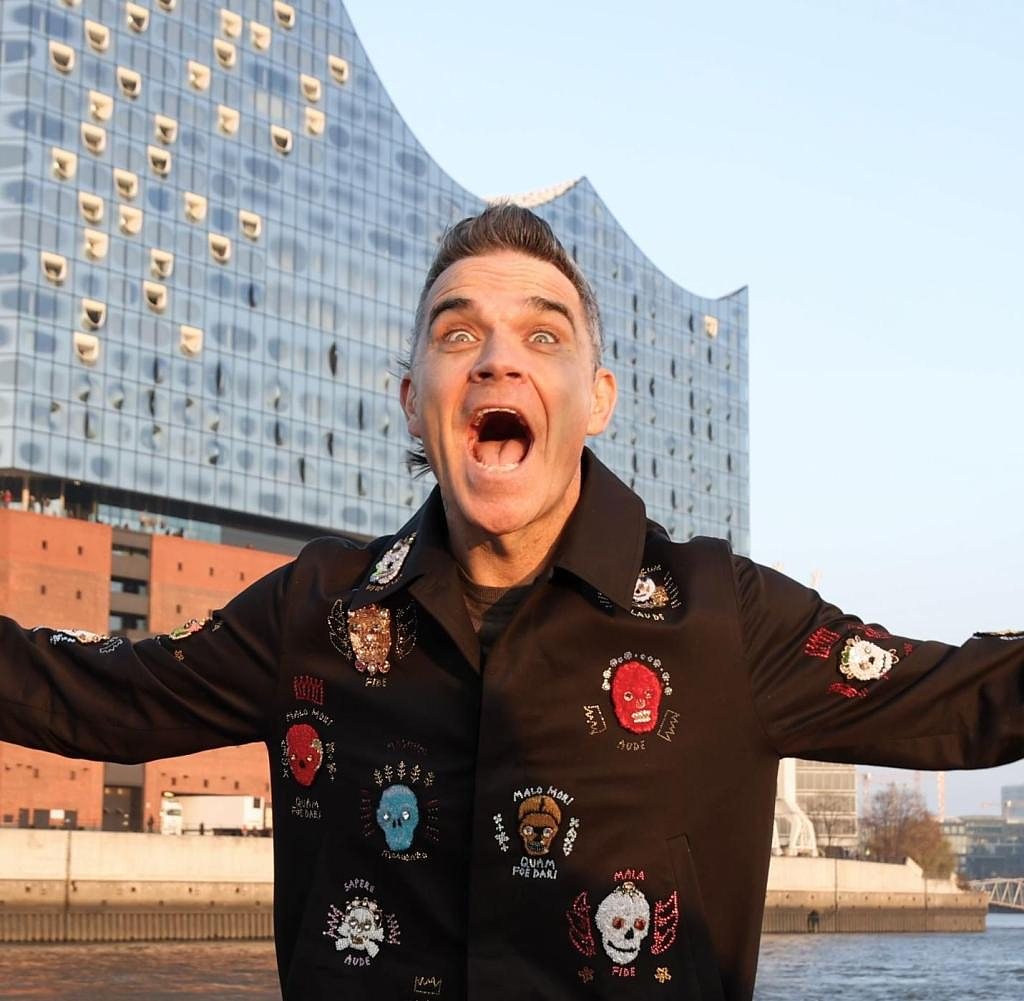 While many artists speak almost in awe of the unforgiving acoustics in the Elbphilharmonie, world star Robbie Williams takes this topic very calmly. “Everyone says the acoustics here are amazing. But I do not care. I don't give a damn," said the 48-year-old before the concert with a smile. The reason for this is very simple: "I have my in-ears on. That's what I hear. You have your speakers in your ears. And I never bothered about the acoustics.” And if he does make mistakes that can then be heard, he doesn't have a problem with that either. "Well, my mistakes are part of the show, so mistakes are welcome."

On Tuesday evening, the Brit not only wants to celebrate his 25-year career with his best songs in the famous concert hall on the Elbe. Also on the program is a special live premiere. This is how artificial intelligence (AI) rearranged his hit song "Angels". The new composition comes from the computer, more specifically from the artificial intelligence "Beethoven AI". She had already completed Beethoven's 10th symphony last year. The piece, for which the AI ​​interwoven the moonlight sonata with the intro of "Angels", for example, is to be performed live for the first time on Tuesday evening at the Telekom Street Gig. The exclusive concert will be broadcast live on MagentaTV and on the station's social media channels.

He was fascinated by Telekom's idea of ​​artificial intelligence recomposing a song by him. This way of writing music is still very new and one can be both fascinated and excited and wary of it, as Williams said. “When it comes to artificial intelligence, you can be all three things. Yes, in my tiny way, I am part of this technological revolution.”

He still thinks his version of "Angels" is better. "Well, the original is the original, isn't it? It made my life and my career possible, and it made everything possible. So it's my baby.” Would he also use artificial intelligence for his new songs in the future? "Maybe. I think it would be interesting if AI could write lyrics.” But he didn't let AI help him for his new album, which is currently in the works.

In the Elbphilharmonie, however, his current album "XXV" and thus his 25-year solo career will be the focus of the evening. The former Take That singer has re-recorded his most popular hits with an orchestra. Together with more than 80 musicians from the Neue Philharmonie Frankfurt, some of them will be heard in the "Elphi".

Normally, his shows are always full of energy and therefore demand a lot from him. If he has his way, the evening can be a little quieter. "I wish I could just stand there at the show and let the orchestra's awesomeness do the work for me. And if that works, I'll take it with me on tour." It starts on February 1, 2023 - back in Hamburg.

Williams already had a little time on Monday to get to know the Hanseatic city better. Among other things, he was out and about in a harbor barge on the Elbe for a photo session and also gave his interviews in the Elbphilharmonie with the best view of the harbour. He had been to the Reeperbahn before, "but I didn't really understand that this is a seafaring and industrial city that is very similar to Liverpool," the Brit continued. “This time I can better understand her heart and soul. I understand Hamburg. I'm starting to bond with the city.”

In the coming weeks, however, Williams has other interests. He "definitely" wants to watch some World Cup matches in Qatar. He will probably also travel to Qatar for this. "I might go there. Friends of mine have already arrived there.” He does not yet know which games he will see. He doesn't think much of a boycott of the World Cup. “The World Cup is the World Cup. If you want to blame anyone for what happened at the World Cup, it's FIFA. But I want to watch football. I would not choose a regime or its people. I am first and foremost a huge fan of football.”

‹ ›
Keywords:
HamburgWilliamsRobbie (PopSänger)ElbphilharmonieKonzertveranstalterKatarFußballWMRobbie WilliamElbeFifaFußballAkustikMusik
Your comment has been forwarded to the administrator for approval.×
Warning! Will constitute a criminal offense, illegal, threatening, offensive, insulting and swearing, derogatory, defamatory, vulgar, pornographic, indecent, personality rights, damaging or similar nature in the nature of all kinds of financial content, legal, criminal and administrative responsibility for the content of the sender member / members are belong.
Related News