"We are with our teachers", "Without teachers there is no future", could be read on the banners carried by the demonstrators, many of whom were teenagers. 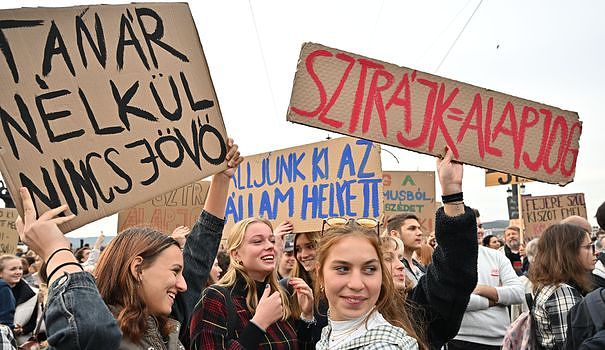 "We are with our teachers", "Without teachers there is no future", could be read on the banners carried by the demonstrators, many of whom were teenagers.

"I'm here because we can't go on like this," Gabor Kovacs, a 19-year-old student, told AFP, lamenting the lack of teachers and educational materials and the salary conditions for teachers.

For another student, Virag Pek, 17, Hungarian teachers "are real heroes for continuing to work in such conditions".

Earlier in the day, thousands of demonstrators had formed a human chain and students had temporarily blocked access to the Marguerite bridge in the center of the capital.

A month ago thousands of Hungarians had already protested in Budapest against the low salaries and poor working conditions of teachers, in a context of shortage of teaching staff.

The number of unfilled teaching positions in Hungarian primary and secondary schools has skyrocketed from 7,000 in 2014 to 35,000 in 2019, according to the latest official data.

Professors complain that they were excluded from government aid given to other groups, such as pensioners and doctors, before the re-election of Prime Minister Viktor Orban for a fourth consecutive term in April.

The government says it will only be able to meet teachers' demands when the European Union releases billions of euros in pandemic recovery funds, for now still blocked.

Budapest received 5.8 billion euros, but its spending plan has not yet been approved by Brussels due to suspicions of corruption.