In front of his new boss Max Eberl, RB Leipzig's cup specialist Yussuf Poulsen shot the defending champion into the round of 16. 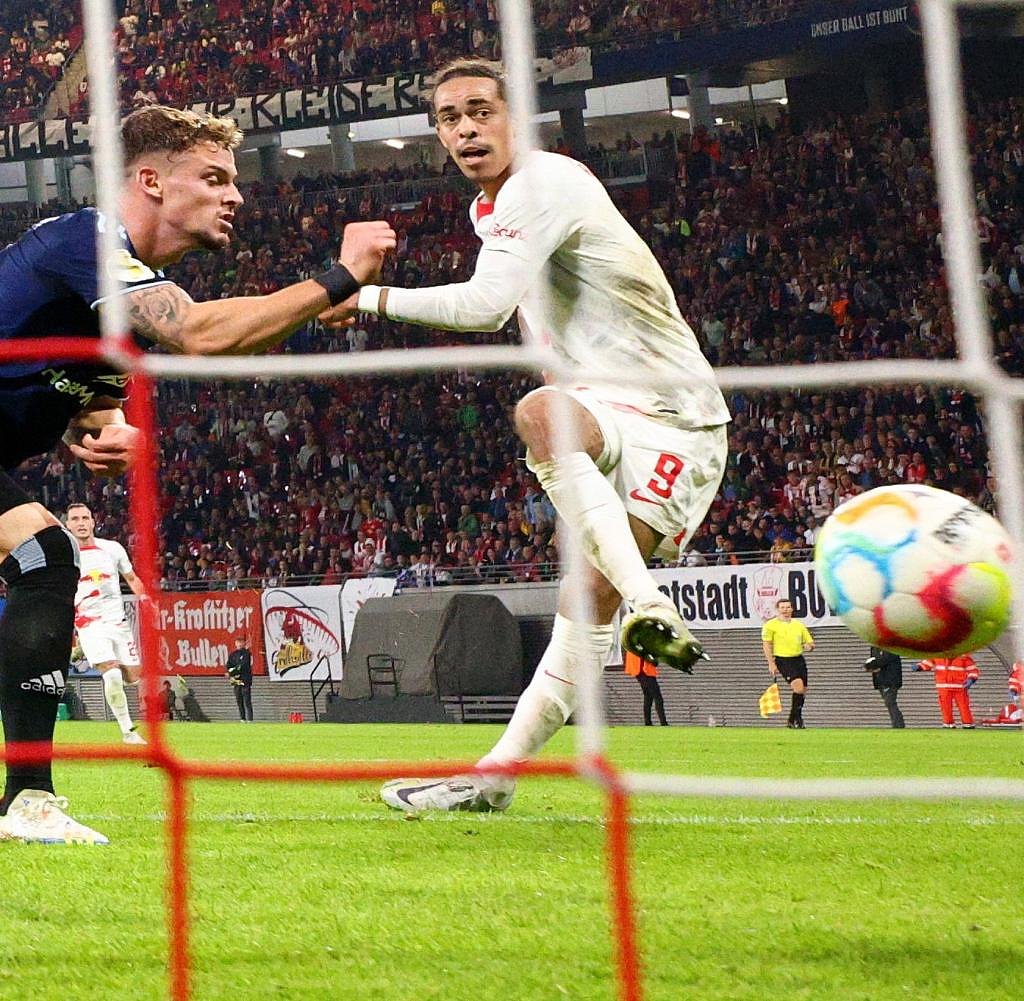 In front of his new boss Max Eberl, RB Leipzig's cup specialist Yussuf Poulsen shot the defending champion into the round of 16. The Danish international made the decision in the 4-0 (2-0) win against Hamburger SV on Tuesday with a brace within three minutes before the break. Mohamed Simakan (68th minute) and Benjamin Henrichs (82nd) ​​scored the other goals. Eberl followed Leipzig's routine performance in front of 44,787 fans for the first time from his new workplace. His future team showed a brutal goal-scoring efficiency against the guests, which Hamburg couldn't match.

Ralf Rangnick, who is regarded as the architect of Leipzig's success, also took a seat on the VIP stand near the future head of sport. Christopher Nkunku, who had just had his hand operated, was also among the spectators. Germany's footballer of the year missed a Leipzig game for the first time after 71 games. Nkunku was last absent on May 8, 2021 due to back problems.

Poulsen made his first start-up appearance of the season for the French attacking artist. And Leipzig's Mr. DFB-Pokal delivered. With his two goals (33rd/36th), the striker, who had been plagued by injury problems for a long time, increased his goals account in the cup to twelve goals. In his now 28 appearances, the 28-year-old also prepared 14 goals.

In the sixth game within 18 days, Leipzig initially left the game to HSV. It was most dangerous with a long-range shot by Miro Muheim, whose shot from 20 meters first hit the crossbar and then the post. Leipzig's first shot on goal came from Benjamin Henrichs in the 28th minute. HSV played the game, enjoyed almost 60 percent possession of the ball – and thus fell into the Leipzig counter-trap.

The strong Dominik Szoboszlai served full-back Mohamed Simakan, whose cross Poulsen pushed into an empty goal. Three minutes later it was almost the same pattern with which Hamburg was duped. Szoboszlai won the ball, sent André Silva – and Poulsen pushed the ball into the empty goal again. Leipzig's coach Marco Rose had previously described the HSV game as "not rocket science", the half-time state proved him right.

The 46-year-old allowed himself to take defense chief Willi Orban out at the break and rest him. Orban was replaced by the young Croatian star Josko Gvardiol, who Chelsea would like to sign.

The game didn't change at first. HSV had the ball but no chances. Leipzig mainly limited themselves to counterattacks, Emil Forsberg (57th) failed to HSV goalkeeper Daniel Heuer Fernandes. On the other side, Janis Blaswich (58') brilliantly saved a Ransford Königsdörffer header. The decision was then made after a Forsberg corner. The Swede found Simakan's head and HSV was finally defeated. After another counterattack, Henrichs made the final score with a low shot.

No sensation in the duel David against Goliath: Europa League winner Eintracht Frankfurt did not show any weaknesses against the Oberliga club Stuttgarter Kickers and made it into the round of 16 of the DFB Cup relatively easily. Coach Oliver Glasner's team mastered their second-round task in the 1987 cup finalists with an unchallenged 2-0 (2-0) victory and kept their chances of the sixth cup triumph in the club's history.

The Kickers and the 10,000 spectators in the Gazistadion in Waldau, which was sold out for the first time in 16 years, could only hope for ten minutes for the sensation of being the first five-league team in the long history of the cup to reach the round of 16. Scorer Randal Kolo Muani (11th minute) gave the favorites the lead with a sensitive lob, defender Hrvoje Smolcic (17th) followed suit. Rafael Santos Borré also hit the post (25th). The start of the second half was delayed by a few minutes because pyrotechnics were ignited from both fan blocks.

"We said for fun, when the lottery ticket was out, that we can now win the European Cup," reveals Nico Blank from Stuttgart before kick-off on Sky. But it was precisely this disgrace that Eintracht coach Glasner wanted to prevent with all his might: "We have to show from the first second that we are the Bundesliga club and want to spend the winter in the cup."

But it took about ten minutes before Frankfurt got used to the circumstances and the bumpy pitch - and took the lead with the first chance: After a fine one-two with Borré, Kolo Muani put the ball sensitively over Kickers goalkeeper Ramon Castellucci into the goal . Borré was one of three newcomers in the starting XI - just like Smolcic, who justified his effort with a header to make it 2-0.

After the 2-0 lead, the Frankfurters played their class and experience without really having to go to the limit. Stuttgart, who beat second division side SpVgg Greuther Fürth 2-0 in the opening round, shifted up a gear after the change of sides – but there weren't any great chances of scoring a goal. The more than 600,000 euros for the second round entry should comfort the indebted traditional club a little about the end.

Kevin Trapp experienced a relatively quiet evening. The international had traveled to Stuttgart straight from the Ballon d'Or award ceremony in Paris, where he had been one of ten nominated goalkeepers for the Yashin trophy.

Bundesliga club FSV Mainz 05 easily made it into the round of 16 at regional league club VfB Lübeck. The Rheinhessen defeated the fourth division team 3-0 (2-0). A proud series of 23 competitive games ended for Lübeck without defeat.

Alexander Hack (16th minute), Marcus Ingvartsen (43rd) and Aymen Barkok (88th) scored the goals for the guests in front of 10,100 spectators in the Lohmühle stadium. The Mainz team lived up to their role as favorites at all times and had several opportunities, but mostly didn't play them consistently. The Rheinhessen team were lucky to make it 2-0 when VfB defender Niklas Kastenhofer shot Ingvartsen on the counterattack and put the ball in front of an empty goal.

As expected, the self-sacrificing defenders from Lübeck rarely got in front of their rivals' goal. Goal chances were missing. FSV goalkeeper Robin Zentner had cleared his place between the posts and left substitute Finn Dahmen. This was only tested at the beginning, however, when VfB striker Felix Drinkuth forced him to make a save with a free kick from around 25 meters out (10').

The leader of the Regionalliga Nord hoped in vain to be able to repeat his former coup. 13 years ago he shot Mainz 05, who had recently been promoted to the Bundesliga, out of the cup in the first round (2-1 aet), but this time the differences in performance were clear.

Mainz had won 2-0 at Werder Bremen three days earlier in the Bundesliga and continued their run of success in the north undeterred. But they weren't sure of their cause before kick-off. That's why they had rehearsed extra penalty shootouts to be prepared for this eventuality. The alarm signal was the first round victory of Lübeck against the second division FC Hansa Rostock (1-0). Coach Bo Svensson's route: "We prepared like we would against a Bundesliga club."

In the second half, VfB trainer Lukas Pfeiffer brought on two more attacking players to keep the eleventh-placed Bundesliga team more occupied in defence. But that hardly worked. Mainz had everything under control and didn't have to exhaust themselves.

Only thanks to an own goal did 1. FC Nürnberg make it into the round of 16 of the DFB Cup in a duel with lower-class SV Waldhof Mannheim. The second division team won 1-0 (0-0) against the bottom of the table in the third division. An unsuccessful rescue attempt by Gerrit Gohlke in the 63rd minute enabled Nuremberg to progress. This means that the four-time cup winner has survived the second round for the first time since the 2018/19 season.

In the rainy Mannheim stadium, the underdog started bravely. Only shortly before the change of sides did Nuremberg increasingly take control. A goal was not initially scored in the match, which was balanced over long stretches.

Shortly after the break, the game had to be interrupted for two minutes because thick smoke spread across the field from the guests' fan block. The “Club” acted more structured in front of 17,757 spectators and then benefited from Gohlke's own goal. After a cross from Kwadwo Duah, Mannheim's central defender maneuvered the ball over the line.

Immediately afterwards, Laurent Jans missed the equalizer from close range. Although SVW coach Christian Neidhart substituted more strikers, the Mannheimers were no longer able to avert the first home defeat of the season.