How the tiny island of Formentera trumps Mallorca

There is no other choice but the boat. 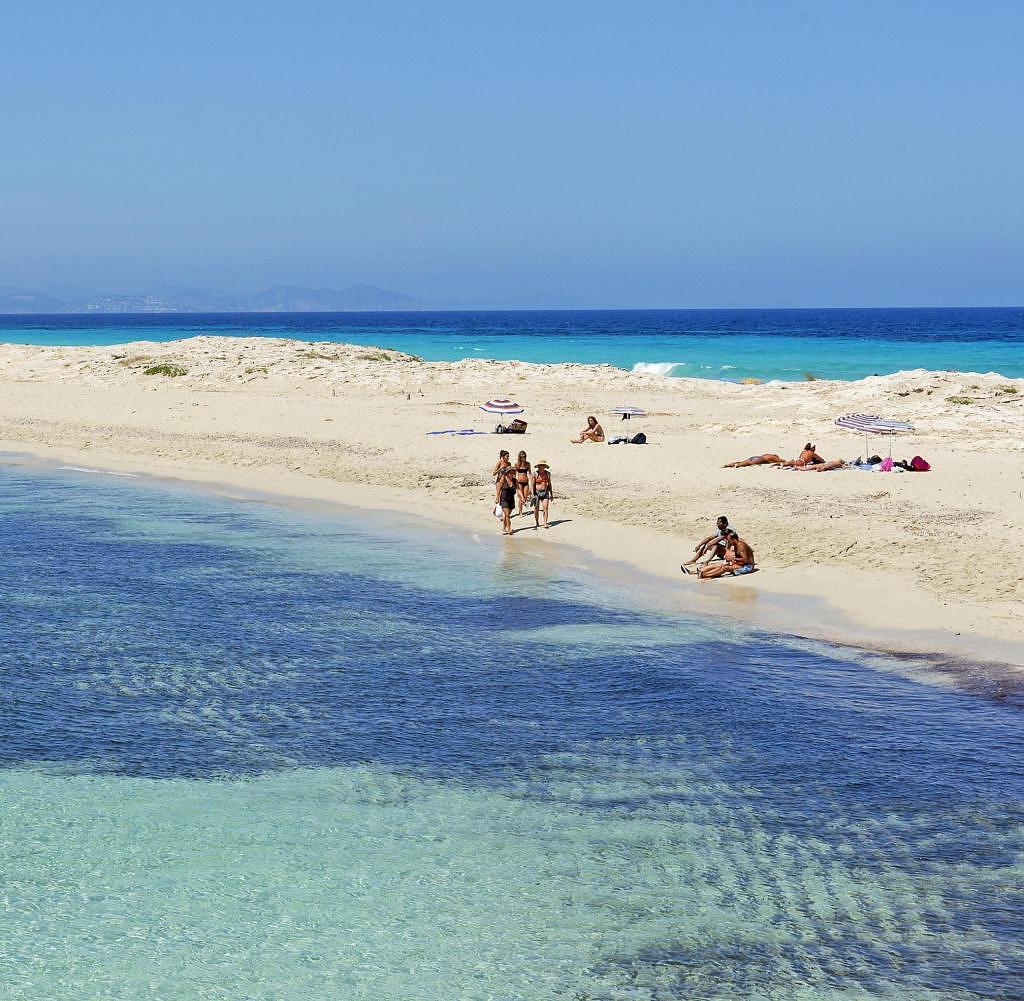 There is no other choice but the boat. While Mallorca's airport caters for millions of guests a year, Formentera is only accessible by sea. After casting off in Ibiza's capital Eivissa, the masses of houses, harbor cafés and hotel boxes blur in the back. The ferry takes half an hour to take vacationers to another world.

Robert Rosselló then takes a close look at the passengers. “The stress already falls away on the ship. The expression on people's faces changes. They are suddenly relaxed, free, smiling,” says the 48-year-old hotel manager. “Then they very slowly disembark with their luggage, which they had hurriedly brought before. The rhythm changes. That's how I feel too."

Rosselló knows what he is talking about when he compares the 83 square kilometer small Formentera with the 3640 square kilometer Mallorca. In the season between May and October he runs a chic house on the northeast coast of Formentera. The rest of the year he lives with his family in his native Mallorca.

“You have a real city there with Palma de Mallorca. You have many restaurants, shopping centers, a dream bay like Alcúdia. But there are a lot of people, a lot of cars, constant horns, traffic lights,” says the Spaniard. "Here on Formentera we don't have a single traffic light."

It's the same archipelago, the same air, the same Mediterranean flora - but everything is different on Formentera than on Mallorca. On Formentera there are no mountains, golf courses, motorways and no high life. "But what we have is worth more than what we don't have," says Santiago Jiménez. The 43-year-old teaches physics at the island's only secondary school and is the founder of the Astronomical Association of Formentera.

In the evenings, Jiménez often meets up with friends to watch the sky at the old windmill near the village of El Pilar de la Mola. The hobby astronomers don't need much - two telescopes, a folding table, chairs, a cool box with beer. It's quiet, like most things on the island.

"We have minimal light pollution," says Jiménez. "Here you can often see the Milky Way, Venus, Jupiter, Mars, Saturn." Only not today, the full moon is too bright. The lunar craters are particularly easy to see.

Jiménez has set himself the task of encouraging visitors to the island to take a look at the night sky. "Simple binoculars are enough, a spot on the beach or here on the La Mola plateau or in the south at Cape Barbaria." The advantage is the short journey: "You can be anywhere on Formentera in no more than twenty minutes." On Mallorca, that would be day trips .

Due to the small distances, bikes and mopeds are popular means of transport. With them you can reach every beach on the island, whether Ses Illetes and Llevant on the northern tip, Es Pujols on the northeast, Cala Saona on the west or Migjorn on the southern flank; Formentera has a total of 70 kilometers of coastline.

Neptune grass (Posidonia oceanica), which forms undersea meadows, is both a blessing and a curse; it's a hot topic in Formentera, even more so than in Mallorca. Because the grass that has washed up in large quantities on the beaches smells stinky and is not a feast for the eyes.

It is therefore specially removed for the tourists. The seaweed can be used to enrich the soil in agriculture. To do this, however, it must be stored in large heaps for a year so that the rain washes out the seawater.

An island authority on Neptune grass is marine biologist Daisee Aguilera. Years ago she began advising yacht skippers to drop anchor only over the sand and never over the ecologically valuable Neptune grass meadows. Because they ensure the supply of oxygen, promote the self-cleaning of the sea and offer fish spawning grounds and protection.

Anyone who goes on a snorkeling tour floats weightlessly over the seabed, where the Neptune grasses sway back and forth. The marine community includes black sponges, sea urchins, starfish, squid and groupers. Very beautiful!

During her patrols, the 35-year-old isn't shy about navigating large celebrity yachts herself - she's taught marine conservation lessons to the captains of Beyoncé, Giorgio Armani, Zinedine Zidane, Naomi Campbell, Roberto Cavalli and Madonna. "Even superstars should anchor correctly," she says.

The environmental expert has identified an increasing population of flamingos in the island's salt pans and talks about planned future projects such as a salt museum and the use of salt in cosmetic sprays. However, Formentera can hardly hold a candle to the salt marshes of Mallorca and the top products there.

The same applies to the hiking trails on the island: on Mallorca they fill entire travel programs, on Formentera only a brochure.

The classic here is Camí de sa Pujada, a historic trail that leads from the coastal village of Es Caló de Sant Agustí through groves of Aleppo pine trees to the La Mola plateau. With dreamy panoramas of the central part of the island, which cinches like a waist between the coastal strips.

The signposting of the hiking trail that starts in the northwest at the Can Marroig picnic area to the historic Gavina coast watchtower is chaotic. Signs appear and disappear. markings along the way? none. That hasn't changed in years.

The only reliable companions are those who scurry across the path and disappear into the bushes: blue, green and turquoise Pitiusan lizards. Visitors can only see significantly more Balearic lizards on Sa Dragonera, an uninhabited island off the southwest coast of Mallorca.

What both Formentera and Mallorca offer are encounters with oddballs. Born in Bremen, Ekki Hoffmann has lived on the island of 11,000 for three decades. With a ponytail and earring, he looks like an old hippie, but he's not. "Hippies don't have a company," he clarifies - meaning himself.

Hoffmann once worked in Germany as an electrical engineer, on Formentera he gives three-week guitar building courses in his workshop in Sant Ferran de ses Roques. He wants, as he says, that tourists not only take home a sunburn from a holiday, but also “an instrument with a Balearic sound”.

How does that work? – “We throw the wooden guitar body into the sea for ten minutes. Then there is a piece of Formentera with a very special feeling in it.” Hoffmann understands this island feeling as a kind of “lovingly backward”. Luckily, the “general trend of everything being more modern, everything bigger” has passed Formentera by.

However, the price level of the hotels and restaurants is anything but backwards - and a low-budget holiday on Formentera is impossible. The paid parking spaces right in front of Hoffmann's guitar workshop also don't quite fit the image of the propagated relaxed atmosphere.

But despite the pursuit of profit – the islanders are as friendly as ever. And they know good food. Dried fish is a unique culinary item on Formentera. "We only use rays for this," says Belén Palerm, who, together with her husband, a fisherman, upholds the tradition.

For at least four days, the finely cut strips of fish dry on linen in a glass house in the courtyard. After that, Palerm puts them in jars with olive oil. Pieces of the peix sec come in the ensalada payesa de formentera, in the farmer's salad, together with potatoes, tomatoes, peppers, onions and bread cubes.

The enterprising islander supplies small shops and restaurants with her dried fish. An island wine goes best with the rustic meal. There are two wineries on Formentera; the rosés and whites have a slight salt note - and their price, because the production is complex.

Days later, the ferry brings holidaymakers back to Ibiza; the melancholy on the ferry is almost palpable. Will Formentera be found the next time as unspoiled as it is now?

Getting there: By plane to Ibiza, there a regular bus runs directly from the airport to the port of Eivissa. From there, ferries run by the operators Trasmapi and Balearia to Formentera's port of La Savina.

Entry and Corona situation: Details on the current entry regulations can be found at auswaertiges-amt.de.

Due to the increasing number of infections, some countries could soon change their entry regulations again. Travel lawyer Kay Rodegra explains when you can withdraw from your holiday free of charge and what else you should pay attention to.

This article was first published in July 2021.