Armed with assault rifles, members of the Military Police (PMOP) patrolled Wednesday in all-terrain vehicles the Colonia Villanueva district, with barricaded houses in an attempt to defend themselves from the violence of the "maras", the criminal gangs that reign of terror in Honduras, and in the neighboring countries of northern Central America, El Salvador and Guatemala. 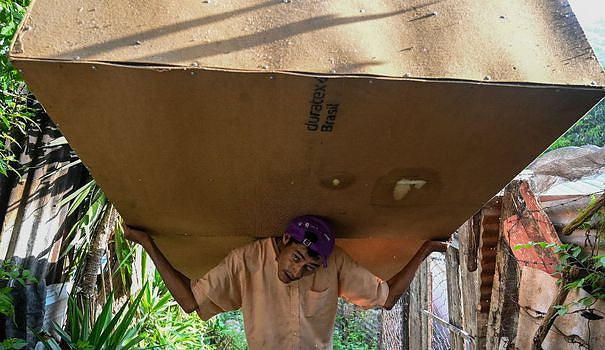 Armed with assault rifles, members of the Military Police (PMOP) patrolled Wednesday in all-terrain vehicles the Colonia Villanueva district, with barricaded houses in an attempt to defend themselves from the violence of the "maras", the criminal gangs that reign of terror in Honduras, and in the neighboring countries of northern Central America, El Salvador and Guatemala.

The police checked and searched vehicles circulating in the neighborhood and ordered suspects to take off their shirts to find out if they had tattoos, characteristics of belonging to "maras", noted AFP journalists.

"Citizens have alerted (the authorities) that they were forced to leave their homes under the threat" of criminals, the Honduran Security Secretariat said in a statement, announcing the mobilization of "more than 200" PMOP police officers. .

Videos circulated on social media on Tuesday showing neighborhood residents loading their possessions onto trucks to flee their homes after being given an ultimatum by "mareros" giving them just a few hours to decamp.

Police are instructed to capture "members of maras or gangs who have intimidated residents", according to the authorities' statement.

The police will remain "permanently in the area", adds the Secretariat for Security.

Criminal gangs operating in northern Central America include Barrio-18 and Mara Salvatrucha (MS-13). Born in the 80s in neighborhoods of Los Angeles (California), they then spread to the countries of origin of delinquents expelled from the United States.

The maras, as well as the cartels of drug traffickers, hold large sectors of the population of northern Central America under their control, putting the three countries among the most dangerous in the world, outside the conflict zone.

In the first six months of the year, more than 2,400 murders were committed in Honduras, notes Migdonia Ayestas, director of the University's Observatory of Violence.

In neighboring El Salvador, President Nayib Bukele is gaining overwhelming popularity by declaring "war" on criminal gangs. In eight months, more than 56,600 suspected members of criminal gangs have been arrested, adding to the approximately 16,000 who were already behind bars previously.

To cope with these massive arrests, the Salvadoran authorities have undertaken to build a gigantic prison capable of accommodating at least 40,000 detainees.