Easter in Cuevas del Almanzora is a significant event in the province. 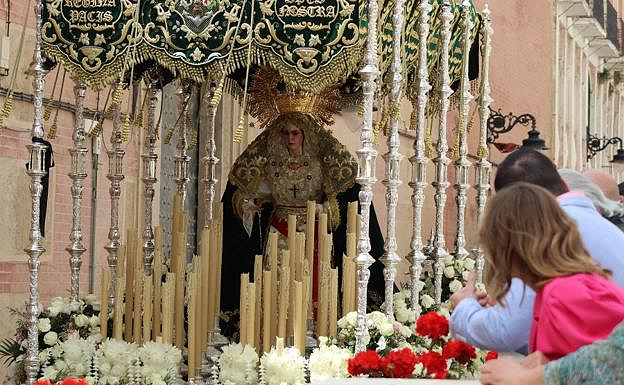 Easter in Cuevas del Almanzora is a significant event in the province. In 2003, it was designated of Andalusian Tourism Interest. After the breaks of 2003 and 2004, it was resurrected this year. It has proven to be worthy of this distinction again.

Cuevas del Almanzora was a living representation of the Passion, Death, and Resurrection Christ during this joyful week.

Tradition and passion were joined by some new items on the streets. The Virgen De las Angustias des Cuevas del Almnzora was the main protagonist of the Holy Tuesday night. She was accompanied by women in a procession where the War Band of the Legion of the King Alfonso XIII Brigade arrived from Viator. This year, as a novelty, they displayed the image of a Crucified Christ to give the crowd a stunning parade.

Palm Sunday was marked by a Mass in the Church of the Incarnation in which the Palms were blessed to be used in the procession that featured a living representation of Jesus' entry into Jerusalem.

The threatening rain didn't stop the Virgin of Hope Macarena, who went out to bring hope to her faithful on Holy Wednesday. When the Paso Blanco's main image arrived at Glorieta, the rain caused her bearers and the entire entourage of to cut the route and return the parish church. Although the downpour was brief, it caused significant damage to the image, the throne, and the human portion of the brotherhood. The throne of Virgin Esperanza Macarena was graced with elegant, gold-embroidered skirts. Last year, this brotherhood celebrated the 25th anniversary the Virgin's arrival in the municipality.

On Holy Thursday, Ma Santisima de los Dolores and Ntro were held after the storm. Padre Jesus Nazareno (Paso Morado) was carried by braceros, their faces covered. The Christ of Mercy was also paraded by women. He was kept safe in Calvario's hermitage until the morning when he would return to the Church of the Incarnation.

The Passion and Death of Jesus was performed on Good Friday morning. It included biblical passages that were represented by all brotherhoods in the municipality, as well as 'la Judea. The Holy Burial of Christ was the night's solemnity. It was performed by the Brotherhood of Maria Santisima de los Dolores, who was accompanied by her son Jesus.

The Brotherhood of Our Lady of Solitude organizes one of the oldest and most popular procesions in Cuevas today, just like every Easter Sunday. This procession is the celebration of Jesus' meeting with Mary, his mother Mary.

‹ ›
Keywords:
SemanaSantaCuevasAlmanzoraResucitaLetargoAnos
Your comment has been forwarded to the administrator for approval.×
Warning! Will constitute a criminal offense, illegal, threatening, offensive, insulting and swearing, derogatory, defamatory, vulgar, pornographic, indecent, personality rights, damaging or similar nature in the nature of all kinds of financial content, legal, criminal and administrative responsibility for the content of the sender member / members are belong.
Related News