"Historic movement" of liberal doctors to "save" their practices

For the first time since 2015, a very broad trade union front is calling for a strike to put pressure on the executive. 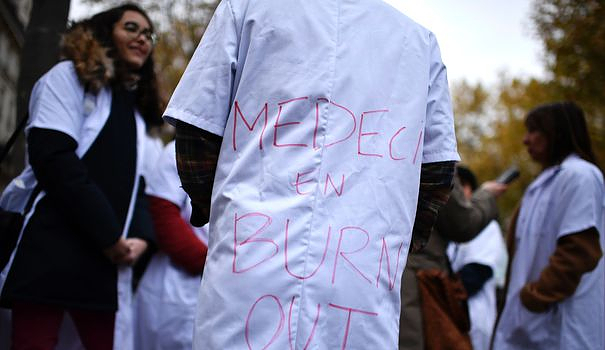 For the first time since 2015, a very broad trade union front is calling for a strike to put pressure on the executive.

This "historic movement" was initiated by the young collective "Doctors for Tomorrow", which in a few weeks gathered nearly 15,000 members on Facebook, a symptom of an anger that is spreading among the 110,000 liberal practitioners in practice.

With the demand for the doubling of the consultation fee – from 25 to 50 euros – this group has rallied the unions to its cause. They see it as a way to influence the open negotiations with Health Insurance for a new agreement for the next five years.

"Fifty euros may seem completely crazy, but it's a point on the horizon to approach the European average" of the consultation fee, around 45 euros, argues Jérôme Marty, of the UFML.

The rise in prices is presented by the unions as a necessity to create a "shock of attractiveness" towards city medicine crushed by administrative tasks to the detriment of care, and which no longer attracts young people.

Even if all the organizations do not call for a strike, like SOS Médecins and the union of pediatricians mobilized on the front line of the bronchiolitis epidemic, "thousands of medical offices will be closed", assures Médecins for tomorrow .

A rally is planned in Paris near the Ministry of Health on Thursday at 2:00 p.m.

Twenty actions are announced in other large cities, in front of health insurance funds, regional health agencies, blood transfusion centers. "Since we are bled, let's give our blood", summarizes in a slogan Corinne Le Sauder, of the FMF union.

Beyond the financial subject, doctors are worried about their freedom of installation, which is increasingly questioned, especially in Parliament where bills on medical deserts are accumulating. They are headwinds against the possibility that certain nurses may be authorized to prescribe.

Counterproductive "politician solutions", judges the CSMF. The diagnosis is shared by MG France, for whom the fight against the "loss of meaning of the profession" "passes neither by constraint, nor by contempt".

The sacred union extends to their cadets of Young Doctors, who demand "consideration", as well as to the interns of Isni, always mobilized against the addition of a tenth year of studies for future general practitioners .

On the eve of the strike, the Health Insurance wrote to the practitioners to "reaffirm the central role of the attending general practitioner in the course of care". Without committing to an amount, she said she was ready "to increase the prices of acts and consultations", in a letter from its general manager Thomas Fatôme, sent to AFP.

But it is not certain that this message of appeasement will start the mobilization, which has received the support of the Order of Physicians, and which could rebound at the delicate time of the end of year celebrations.

"If we are not heard, we will call for a hard and unlimited strike from December 26", already warns Doctors for tomorrow.

"I'm not sure it's popular, or it's the right time," warned Minister Delegate for Health Professions Agnès Firmin Le Bodo last week.

The argument of public opinion has its limits, however, as demonstrated by biologists. Pointed out for its record profits linked to Covid-19 tests, the sector stubbornly refuses the puncture of 250 million euros per year on other examinations, included in the Social Security budget.

On the other hand, the laboratories have offered to save up to 685 million euros over four years, "in liability" according to the Medical Biologists, who refuse to be presented as "war profiteers". They announced not two but three days of mobilization, from Thursday to Saturday.