He was very close to landing the big shot again at the Darts World Cup in London. 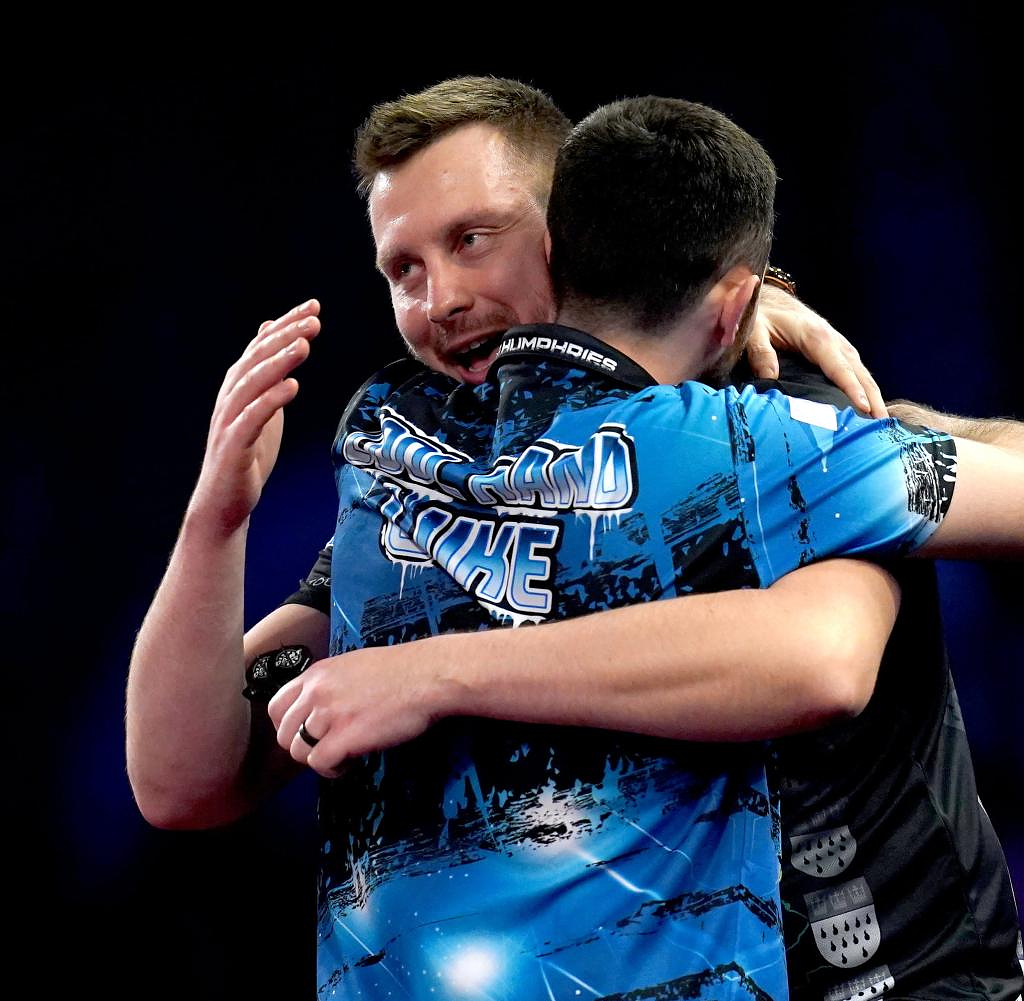 He was very close to landing the big shot again at the Darts World Cup in London. In the end, Florian Hempel lost a very narrow 2:3 against Luke Humphries, who was fifth, and missed 24 hours after Gabriel Clemens' 3:0 win, who now meets Jim Williams after James Wade's exit the third round.

The start was promising, and the march into the Ally Pally worked this time. After Elton John's "Rocket Man" had mistakenly sounded out of the speakers during his performance in the first round, Hempel came on stage as usual with "Kölsche Jung" by Brings. As in the previous year, the 32-year-old wanted to ignite the rocket himself.

At the 2022 World Cup, Hempel sensationally beat number five in the world rankings with Dimitri van den Bergh. And this time the man from Cologne got the chance to create a surprise. Humphries revealed major problems at the beginning and only managed an average of 83.27 points in the first round. Hempel initially used the weaknesses and made it 2-0, but then had problems completing the set and conceded the 1-2 and 2-2. Even a furious start in the decider, Hempel was left with 41 points after nine darts, did not bring him security. After four mistakes on the final double, it took opponent weaknesses to then complete the fifth attempt on double eight.

Both used the ensuing break to crack 100 in round two after averages in the mid-80s. Humphries also applied his weakness to doubles and took the set 3-0. But Hempel stayed on, missed the 170 for a 2-1 set lead on the bullseye, but hit five darts later thanks to another Humphries error. The Englishman then got through his throw-off sentence again with 3:0, so that the decider had to decide.

As in the entire course of the match, both missed a few chances. "Cool Hand Luke" wobbled, but got the break to make it 2-1 after Hempel had just failed on double 10. A tiny thing that meant the preliminary decision. A leg later, Hunphries made it 3-1 in legs and 3-2 in sets with strong scoring. Hempel ended up at an 86.45 average, Humphries finished at 90.95, depressed by his 29 errors on doubles.

"The match certainly wasn't great," Humphries admitted, "but I'm through to the next round and I worked hard to get across the finish line at the end." Hempel, on the other hand, was a little sad for missing double 10. “Looking back, that probably made the difference. I miss the double, he scores. That's why he's number five in the world and I'm not."

The 32-year-old should still be sitting happily under the Christmas tree at the weekend. The £15,000 prize money he receives for reaching the second round gives him a buffer in the rankings to keep his tour card at the end of next season. Only the first 64 are eligible to play, currently Hempel would jump ten places to rank 50.

For some, the tournament is over, for others it's only just getting started. On Friday evening, Martin Schindler will be the third and last German to enter the tournament. The 26-year-old is seeded number 29 and is in the second round of the World Cup for the first time in his career, but has caught a difficult fate with the Englishman Martin Lukeman. To make matters worse, "The Wall" arrived at the player's hotel on Thursday afternoon without arrows or jersey.

After his flight was canceled due to heavy fog in London, he took off from Frankfurt two hours later and without his checked luggage. The all-clear was then given in the evening by e-mail. Accordingly, his suitcase has now arrived in the British capital, but is still at Heathrow Airport and should be delivered on Friday.

Gary Anderson had no problems with his equipment even in his 22nd World Cup appearance. The Scottish world champion of 2015 and 2016 has lived in England for many years and came to Alexandra Palace by car. His performance against Latvia's Madars Razma was highly anticipated after Anderson played even fewer tournaments this season than in previous years.

However, the 52-year-old could not give a clear answer at 3: 1. The “Flying Scotsman” ended the first set with an extremely strong average of 105 and just missed the 170 finish.

After losing the second round in the decider, however, he also threatened to lose his throw-off set after Razma checked 154 points to break. However, Anderson then benefited from five missed set darts from his opponent. While Razma tore his hair at the missed chances, Anderson checked on double four to make it 2-1.

In the fourth set, the Scot was able to improve again, cleared 121 points to break and was 2-1 right before the finish line. On double 18, victory was on a silver platter, his opponent was far away with 229 points, but Anderson missed five match darts in a row and had to go to the decider again, only to take 110 points out of victory with his third high finish. Light and shadow alternated every two minutes. After all, it was enough for a decent average of 96.39 in the end.

"A win is a win," said Anderson, grinning and preferring to focus on the beginning of the match: "The first set was fine, the second set was fine too." Until his next appearance, he wants to enjoy Christmas with his family and throw some darts with his buddies at the pub. Those who know Anderson will know all too well, however, that after a shaky opener against Razma, he'll be busy over the holidays trying to add consistency to his game. Already on December 27th he meets Chris Dobey or Martijn Kleermaker in round three. He at least indirectly denied the assumption that it could be his last World Cup. "Darts is not a young people's sport. It has a lot to do with experience. Especially at the World Cup. You can still become world champion as a player over 50.”

In the afternoon, the Dutchman Dirk van Duijvenbode caused a sensation. With eight perfect darts, number 14 in the world rankings initially set the sporting highlight of this World Cup. He just missed double 12 for a nine-darter. "Sometimes you throw a nine and wonder why the last dart is in it. This time it was the other way around: I threw the dart and knew it was in, but unfortunately it wasn't in," says van Duijvenbode.

At the end of the match against Karel Sedlacek, he became part of a drama and the first overtime of the tournament. After surviving a match dart from the Czech, he equalized to make it 2-2 and made it 4-2 in 14 and 15 darts. From the second round, a two-leg lead is required in the deciding set. For Sedlacek, on the other hand, the bullseye to victory would have meant the tour card for the next two years.

The second round ends on Friday with the last two sessions before the Christmas break. In addition to Schindler, Rob Cross and Jonny Clayton are two players from the top 8.