Aged 70, the producer of "Pulp Fiction" has been serving a 23-year prison sentence for sexual assault and rape in New York since 2020. 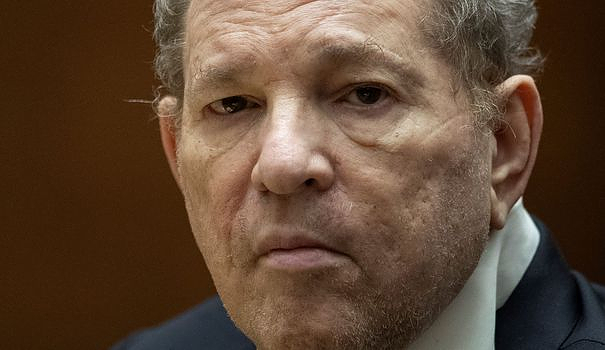 Aged 70, the producer of "Pulp Fiction" has been serving a 23-year prison sentence for sexual assault and rape in New York since 2020.

For this new trial in Los Angeles, a city where he once reigned supreme over Hollywood, he is accused of having raped or sexually assaulted five women in hotels, between 2004 and 2013.

The hearing, which is expected to last two months, will begin on Monday with the selection of jurors. In July 2021, Mr. Weinstein pleaded not guilty during preliminary hearings in Los Angeles court, where he appeared in a wheelchair clad in his brown inmate jumpsuit.

If convicted, the former Hollywood magnate faces up to 140 years in prison, in addition to his New York conviction, the appeal of which was rejected. He is also charged in the UK with sexual assaults that date back to 1996.

The sprawling accusations over Mr. Weinstein's predatory behavior surfaced in 2017 and his March 2020 conviction in New York, followed by immediate jailing, was a major victory for the movement

In total, nearly 90 women including Angelina Jolie, Gwyneth Paltrow and Rosanna Arquette have accused Harvey Weinstein of harassment, sexual assault, or rape. But the statute of limitations has been exceeded in many of these cases, some dating back to 1977.

The former producer has always assured that all his accusers were consenting.

The allegations are "unproven, not credible and unsubstantiated", his lawyer Mark Werksman had told the press in July 2021, arguing that there was no forensic evidence or credible witnesses to support them.

- Film about his influence -

During the New York trial, the prosecution asked the jurors to believe the word of the victims, without presenting forensic evidence and without calling a witness to the bar.

In California, Harvey Weinstein is notably accused of having raped an Italian model in a Beverly Hills hotel in February 2013, then of having sexually assaulted Lauren Young, an up-and-coming actress, in the bathroom of another hotel.

The latter, the only accuser not to be anonymous in this case, had already testified at the New York trial.

Holding a new trial in Los Angeles is essential for the victims, the lawyer for several of them insisted last year, stressing that they have "until now had no access to justice" .

Since the fall of Mr. Weinstein, the liberation of speech provoked by the movement

Actor Kevin Spacey, for example, is currently on trial in New York in a civil lawsuit brought by American actor Anthony Rapp, who accuses him of "sexual assault" when he was 14 in 1986.

Mr Weinstein's retrial also coincides with the premiere of the film 'She Said', which will premiere next week at the New York Film Festival and traces the investigation by the two New York Times reporters into the grip and wrongdoings of the all-powerful producer.

Before his fall, his influence on Hollywood was immense. At the end of the 1970s, he founded the Miramax studio with his brother, sold to Disney in 1993, then The Weinstein Company, behind great successes, such as "Inglourious Basterds" by Tarantino.

Over the years, films produced by Weinstein have received more than 300 Oscar nominations and 81 statuettes.