The hop market to the west of the St. 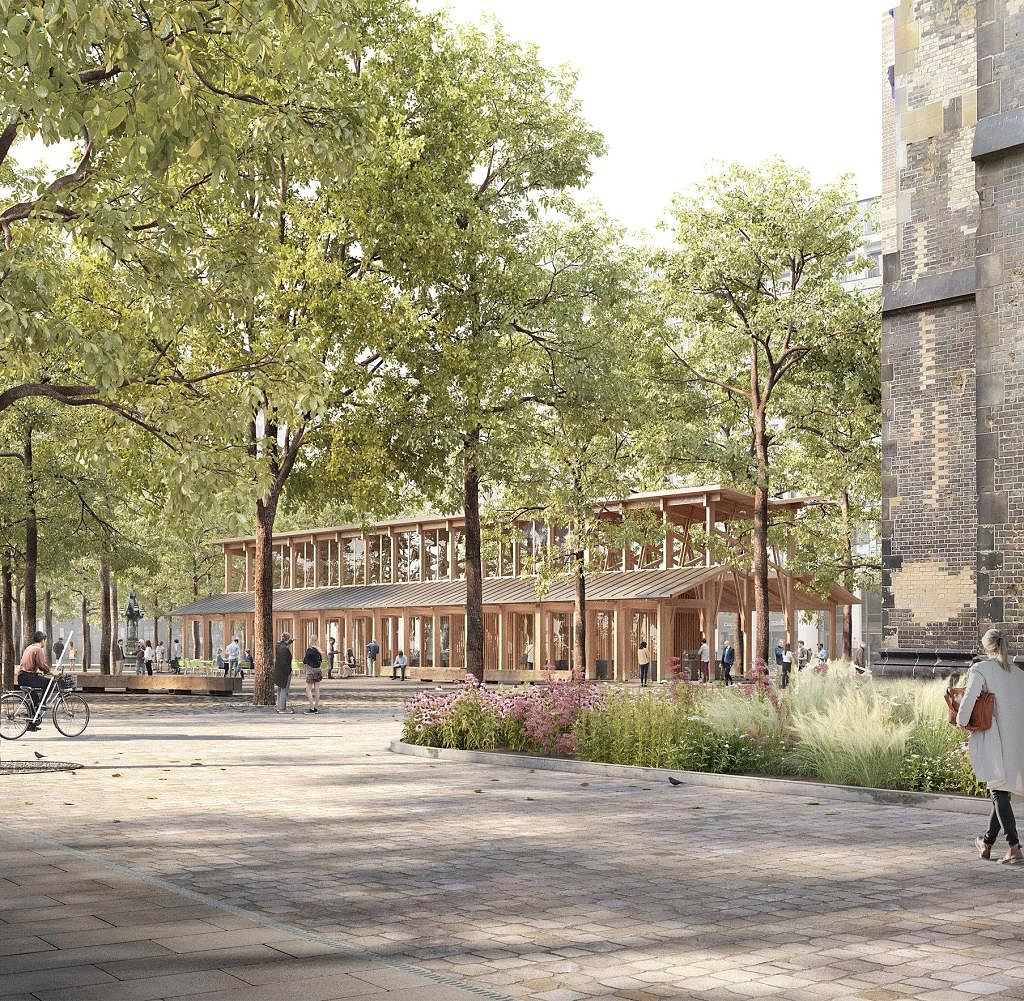 The hop market to the west of the St. Nikolai memorial is being redesigned. In this way, the urban space, which was used as a vegetable market from the Middle Ages to the 20th century and now serves as a car park, should move from its peripheral location back into the focus of the citizens. In addition, an "Archaeological Window" will be created, which will permanently present the scientific findings on the New Castle: In the course of various excavations around St. Nikolai, the archaeologists found well-preserved remains of the Saxon ring wall system, which was built here 1000 years ago as a successor fortification to the Hammaburg. "With the redesign of the hop market, we want to make Hamburg's origins tangible for the general public by telling the story of the Neue Burg on site," says Senator for Culture Carsten Brosda (SPD).

In the competition, initially with 30 teams of architects and landscape planners, and then nine in the second phase, two winners prevailed. A professional jury awarded the first prize to Duplex Architects with greenhouse landscape architecture. The design by MNO architects with Planorama landscape architecture Maik Böhmer came second. Before the final jury meeting last Wednesday, the authority called on all Hamburg residents to view the nine competition entries anonymously exhibited in the Altona Cruise Terminal and to comment in writing. The comments were incorporated into the decision of the jury.

The winning designs meet all the requirements for upgrading the hop market that were formulated by city planners and archaeologists in the run-up to the competition. The central element of the transformation is an exhibition building as access to an archaeological excavation that is yet to be carried out. In the underground exhibition area, a preserved cross-section through the 40-meter-wide, five-meter-high rampart of the Neue Burg is shown, which, according to Rainer-Maria Weiss, Director of the Archaeological Museum and member of the jury, "is perfectly preserved in its full extent and in all details in the ground slumbers".

Duplex Architects designed an elongated building that, with its airy wooden construction, is reminiscent of the temporary roofing of an excavation site. At the same time, the wooden pillars that support the slightly inward-sloping roof pick up the rhythm of the linden trees that grow on the hop market and are intended to continue to shape it.

The light building spans an incision in the ground, where the castle wall is impressive. The second-placed design also includes an unobtrusive pavilion as an entry point into the underground. MNO are also planning a window in the marketplace floor through which the wall can be seen for those who are in a hurry.

The New Castle, made of wood and earth and up to 170 meters in diameter, was built from 1021 and lasted 120 years. The castle area, ideally located between the Alster and the Elbe, then became the foundation of the Neustadt, inhabited by merchants, as the nucleus of the growing commercial and Hanseatic city. Accordingly, the Hopfenmarkt project is also about reintegrating the place into its historical environment between the old town and the Speicherstadt, which has been cut up by Willy-Brandt-Strasse since the post-war period.

The Hopfenmarkt will now also be an important building block for tourists on the historic path from the Trostbrücke to the Deichstraße, explained Weiss. "We hope that we can give this square back its dignity - and its urban significance," added senior building director Franz-Josef Höing, who was also a member of the jury.

Because the inner city - HafenCity axis is to be fundamentally strengthened, the competition tasks also included the open space design of a ground-level passage across Willy-Brandt-Strasse - as a replacement for the non-barrier-free pedestrian bridge to Cremon, which was demolished a year ago. All nine competition entries shown in the second phase rely on a green extension of the tree-lined hops market to the south and propose the planting of park trees on both sides of the street, on the traffic island and on the small square in front of the Bundesbank.

With the help of loosely distributed park benches on the former market place itself, the award-winning landscape planners want to transform the place next to the traffic lane into an oasis of peace. "The redesign of the hops market is part of a larger strategy for the inner city," explained senior building director Höing. One of their goals is the upgrading of public spaces. In the next step, the two award-winning teams will now be invited to a negotiation process.

‹ ›
Keywords:
TexttospeechHamburgStadtplanungInnenstädteArchäologieBundesbankDesignHamburg Neue BurgSPDNeustadtCarsten BrosdaHammaburgHopfenmarkt
Your comment has been forwarded to the administrator for approval.×
Warning! Will constitute a criminal offense, illegal, threatening, offensive, insulting and swearing, derogatory, defamatory, vulgar, pornographic, indecent, personality rights, damaging or similar nature in the nature of all kinds of financial content, legal, criminal and administrative responsibility for the content of the sender member / members are belong.
Related News