The text, prepared by the United States and Mexico and voted on by the 15 members of the Council, targets in particular the gangs which sow chaos in this poor Caribbean country and from which it "demands an immediate cessation of violence, criminal activities and human rights abuses". 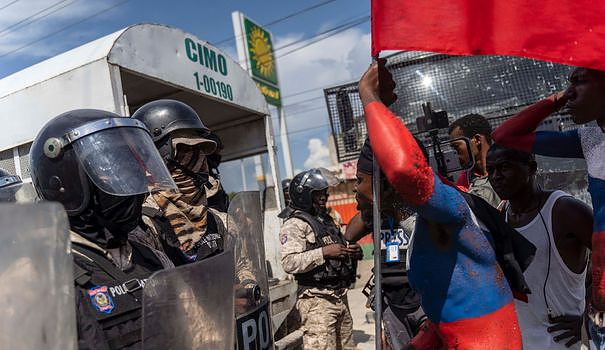 The text, prepared by the United States and Mexico and voted on by the 15 members of the Council, targets in particular the gangs which sow chaos in this poor Caribbean country and from which it "demands an immediate cessation of violence, criminal activities and human rights abuses".

The Security Council has been debating for weeks two draft resolutions on Haiti, grappling with a multidimensional crisis: economic, security, political and humanitarian.

Monday, the Council had discussed the possible dispatch of an international force to allow the population to emerge from the "nightmare", but without taking a decision on this option which is not unanimous.

"The situation is absolutely dramatic. The port is blocked by gangs who do not let the fuel out (...) Without fuel, there is no water. And there is cholera", whose treatment requires a good supply of drinking water, said UN Secretary General Antonio Guterres.

This second resolution, adopted on Friday, provides for the establishment of a sanctions regime (travel ban, asset freeze, targeted arms embargo) against gangs and their leaders.

The only leader mentioned by the UN text is Jimmy Cherizier, nicknamed "Barbecue", "one of the most influential gang leaders, who leads an alliance of Haitian gangs nicknamed the G9 family and its allies". Cherizier is blocking the Varreux terminal and his actions "have directly contributed to the economic paralysis and humanitarian crisis in Haiti", according to the UN.

"This resolution is a first response to calls for help from the Haitian people," said US Ambassador to the UN Linda Thomas-Greenfield.

Haitians "want us to act against the criminal actors, especially the gangs and their financiers, who have undermined stability and increased poverty in this dynamic society," added the American diplomat.

She was delighted that "the Security Council has sanctioned one of the most notorious leaders of a criminal gang (...) whose actions have directly contributed to the humanitarian crisis which is causing so much suffering among the Haitian population. ".