Habeck dissatisfied - Wind energy expansion on land must be faster

Federal Minister of Economics Robert Habeck is not satisfied. 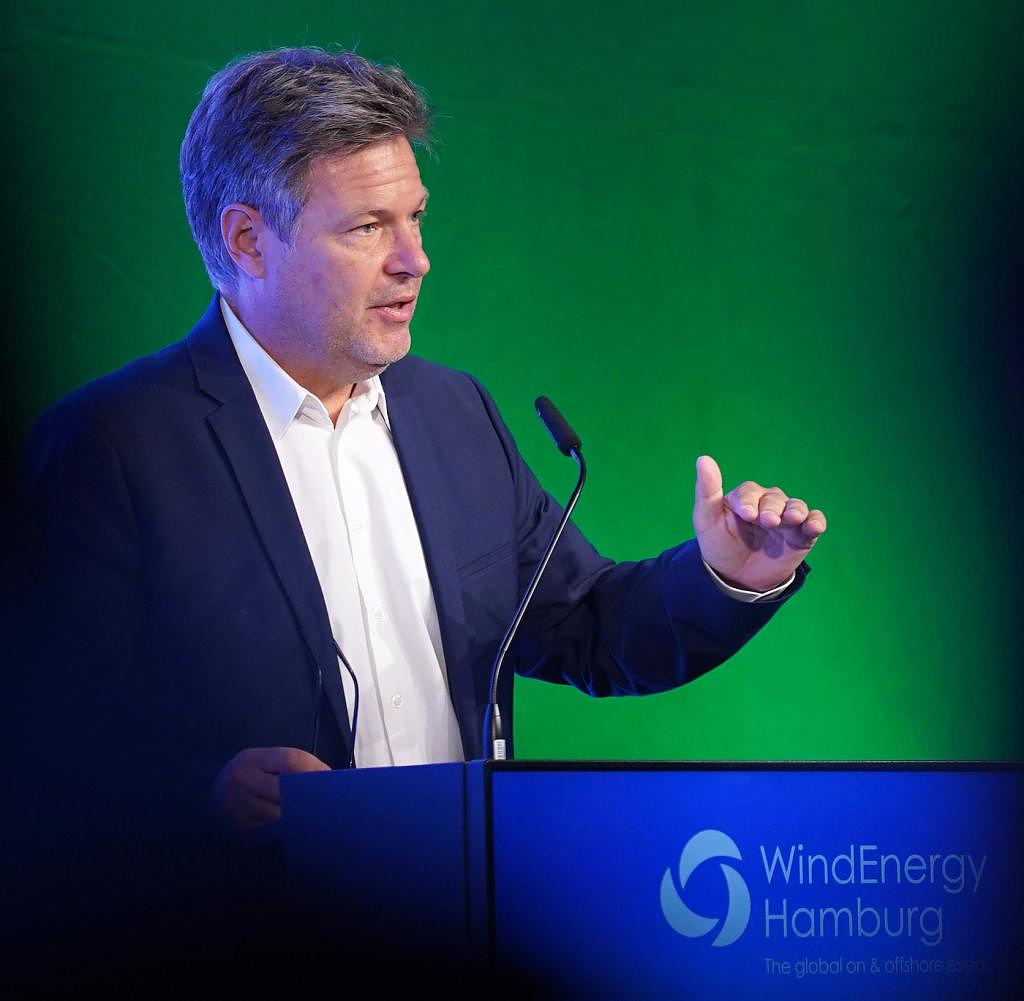 Federal Minister of Economics Robert Habeck is not satisfied. When he opened the world's largest wind trade fair, WindEnergy, in Hamburg on Tuesday, he didn't hold back on criticizing the federal states. The Green politician demands that they become significantly more committed and faster in the expansion of wind energy. There is no way they could continue as before. "That is not acceptable."

In Germany there is currently almost 57 gigawatts of wind power capacity on land - and that took decades. However, the capacities would have to be doubled within eight years, says Habeck. Only two gigawatts were installed last year, but ten gigawatts would be needed - exactly those ten gigawatts of capacity that are currently in the approval process of the federal states.

"If all federal states would do their job (...) then we would have a chance," emphasizes Habeck. The federal government can pass as many laws as it wants, if the federal states don't do the work, "we will lose". Habeck emphasizes that two percent of the federal territory is now reserved for wind turbines. However, he simply cannot understand that there are still wind energy bans in some countries.

If it were up to him, he would have abolished the so-called 10H rule in Bavaria a long time ago. This rule states that wind turbines must be at least ten times their own size from the nearest inhabited house. This means that there must be no settlements within a radius of more than two kilometers from 200 meter high wind turbines - rather rare in Bavaria.

Habeck nevertheless welcomes WindEnergy under the motto "It's time to put climate first". "I am very pleased to be able to open the world's leading trade fair for wind energy on land and at sea here in Hamburg." The importance of wind energy and the expansion of renewable energies as a whole is more urgent and important than ever. "An accelerated energy transition is the be-all and end-all for a secure and sustainable energy supply, not just in Germany but throughout Europe."

WindEnergy, which was held as a digital event in 2020 due to the corona pandemic, will start as a face-to-face trade fair for the first time since 2018. Around 1,400 companies from 37 countries will be presenting innovations and solutions along the entire value chain of wind energy on land and at sea in the Hamburg exhibition halls until Friday. A total of up to 30,000 trade visitors from all over the world are expected.

For the first time, WindEnergy is also linked to a specialist conference on hydrogen. According to the information, the H2Expo wants to be an international meeting for the production, distribution and use of green hydrogen and a platform for the entire industry. "Wind energy and hydrogen are twins, in the energy world of tomorrow they belong together," says trade fair manager Bernd Aufderheide, explaining the extra program.

Meanwhile, the wind industry itself is presenting a “Hamburg Declaration on Responding to the Energy and Climate Crisis”. In it, she demands, among other things, that politicians focus on renewable energy, simplify the approval process and push ahead with the digitization of approvals.

The green hydrogen must also come onto the market quickly. "In aviation, shipping and those parts of industry that cannot be directly electrified, politics must prioritize the switch to renewable hydrogen," says Vice President of the German Wind Energy Association, Björn Spiegel.

Meanwhile, on Tuesday in front of WindEnergy, hundreds of employees of the German subsidiary of the Danish wind turbine manufacturer Vestas went on warning strike to emphasize their demand for a collective agreement. For the first time, around 1,700 employees nationwide should stop working all day, the union IG Metall announced. Several hundred took part.

“We are not here today because we are against Vestas, but because we are for Vestas. For a Vestas with reasonable conditions, collective agreements and prospects," said IG Metall district leader Daniel Friedrich at a rally in Hamburg.

The union is reacting with the warning strike to Vestas Germany's refusal to negotiate a collective agreement. The employees could not understand "that their employer continues to refuse any negotiations," said IG Metall negotiator Martin Bitter. "Together we want to demonstrate our determination and make it clear that we are sticking to our goal of a collective agreement."

Despite the typical bad weather in Hamburg, around 100 employees from northern and eastern Germany traveled to the rally to demonstrate in front of the Hamburg exhibition halls. They had whistles, red shirts and banners with the inscription “We make wind” in their luggage.

‹ ›
Keywords:
WindenergieHabeckRobertHamburgMessenOffshoreWindparksWindräderVestasTexttospeechIG Metall (Industriegewerkschaft Metall)KarriereWindmesseOstdeutschlandBayernGrüne WasserstoffWindEnergy HamburgRobert HabeckVestas Deutschland
Your comment has been forwarded to the administrator for approval.×
Warning! Will constitute a criminal offense, illegal, threatening, offensive, insulting and swearing, derogatory, defamatory, vulgar, pornographic, indecent, personality rights, damaging or similar nature in the nature of all kinds of financial content, legal, criminal and administrative responsibility for the content of the sender member / members are belong.
Related News