Haaland shoots ManCity with a dream goal to win against BVB

And in the end Erling Haaland was jubilant: the coup against the ex-scorer and star coach Pep Guardiola was within reach, but in the end Borussia Dortmund came up empty-handed. 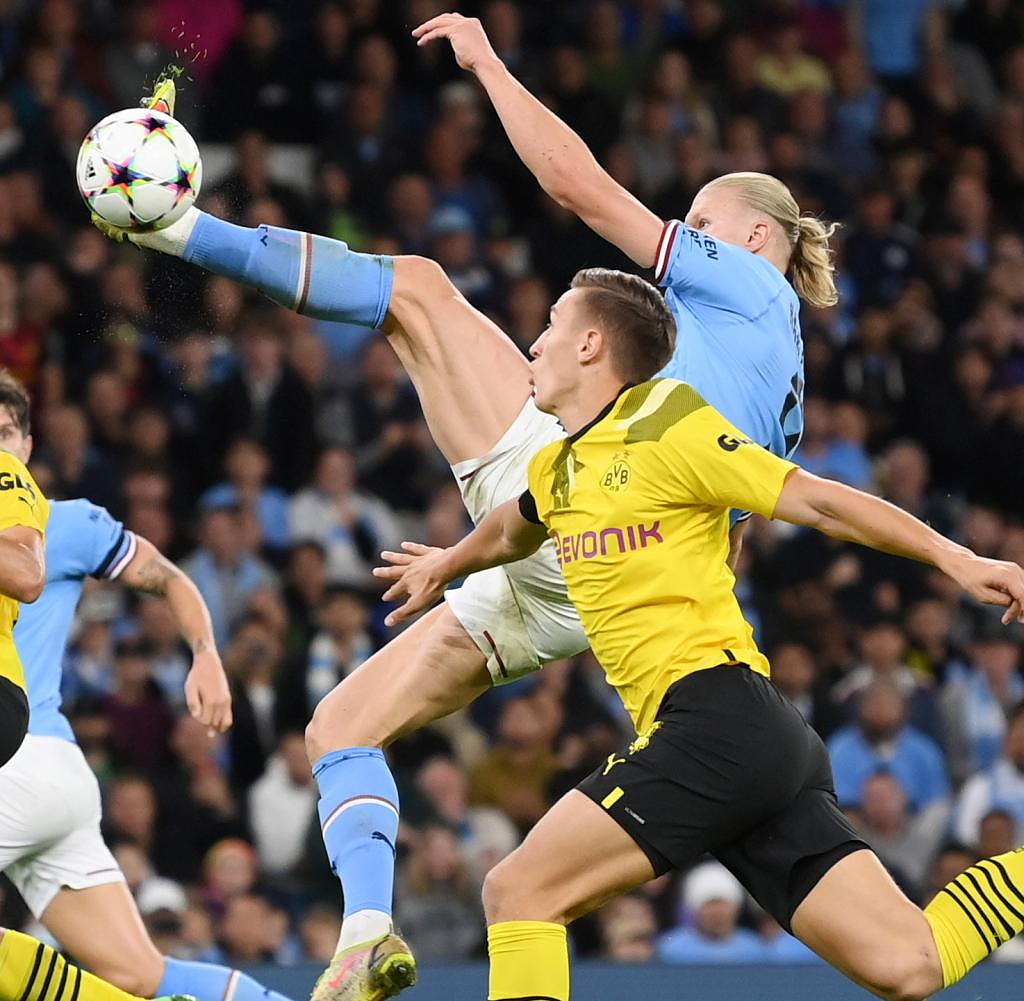 And in the end Erling Haaland was jubilant: the coup against the ex-scorer and star coach Pep Guardiola was within reach, but in the end Borussia Dortmund came up empty-handed. At English champions Manchester City, BVB led 1-0 after a defensively disciplined performance for a long time up to the 80th minute, but then suffered a 1-2 (0-0) defeat on the second matchday of the Champions League. The black series against teams from the English Premier League continued, with BVB now losing the last eight duels in a row.

Manchester's hero was Haaland with the spectacular winning goal in the 84th minute, while the Dortmund cover had the Norwegian, who switched from BVB to City in the summer, well under control. John Stones equalized the Dortmund lead by Jude Bellingham in his English homeland (56th) (80th), BVB substitute keeper Alexander Meyer did not look good with his long-range shot.

Before the ball rolled, the obligatory Champions League anthem was dispensed with out of respect for the late Queen Elizabeth II.

The reunion with Haaland was warm before kick-off. After all, the Norwegian had achieved great things for BVB in the past two and a half years with 86 goals and 109 direct involvements in goals in 89 competitive games. So it was now a question of getting this elemental force under control on the other side. Dortmund chose a very defensive variant. When the hosts had possession of the ball, the black and yellow closed the center with seven or eight players. "The whole team is very dangerous. Focusing only on Erling would be negligent. We have to prevent the allusions to Erling,” Terzic explained the tactics.

A tactic that bothered the English champions. Accordingly dissatisfied, Pep Guardiola marched up and down in the coaching zone. Almost unimaginatively, Man City circled the ball around the Bundesliga club's penalty area without really causing any danger. So Haaland was largely unregistered in the storm center. The Norwegian recorded a total of eleven ball contacts in the first 45 minutes, even Anthony Modeste had one more on the opposite side.

BVB still had to change its central defense. After national player Nico Schlotterbeck complained of back pain in the final training session, Terzic relied on Niklas Süle and Mats Hummels in central defense. Schlotterbeck came on later. It was also Süle who cleared a dangerous cross with a header just before Haaland (15th). It was almost one of the highlights of an uneventful first half. Because even Dortmund didn't endanger Ederson's goal with their relief attacks.

Those who had expected the hosts to attack in the second round were disappointed. Instead, BVB became bolder on the counterattack. Reus had the great opportunity to take the lead when he perfectly got out of his former team-mate Manuel Akanji, but then put the ball just wide of the goal (52'). Akanji only switched to City shortly before the end of the transfer period and verbally attacked his ex-club again.

If Reus was still very unlucky with his huge chance, the national player was decisive for the opening goal shortly afterwards. Bellingham deflected his shot with a header into Ederson's goal. Significantly, Haaland and Akanji had let the Englishman escape. At the other end, it wasn't until the 66th minute that the Norwegian got his first chance to score, when he put the ball on the outside of the post from a tight angle.

But it was the wake-up call for the hosts, who became more precise in their actions. However, BVB keeper Meyer did not cut a good figure when Stones equalized. And just minutes later, Haaland still came to his performance. After a cross from Joao Cancelo, the Norwegian was there from close range.

‹ ›
Keywords:
Borussia DortmundHaalandErling BrautChampions LeagueManchester CityManCityPremier LeagueFussballPep GuardiolaNiklas SüleErling Haaland
Your comment has been forwarded to the administrator for approval.×
Warning! Will constitute a criminal offense, illegal, threatening, offensive, insulting and swearing, derogatory, defamatory, vulgar, pornographic, indecent, personality rights, damaging or similar nature in the nature of all kinds of financial content, legal, criminal and administrative responsibility for the content of the sender member / members are belong.
Related News