Donald Trump said it at the convention of National Rifle Association (NRA), where 30 million dollars was invested in his presidential campaign. 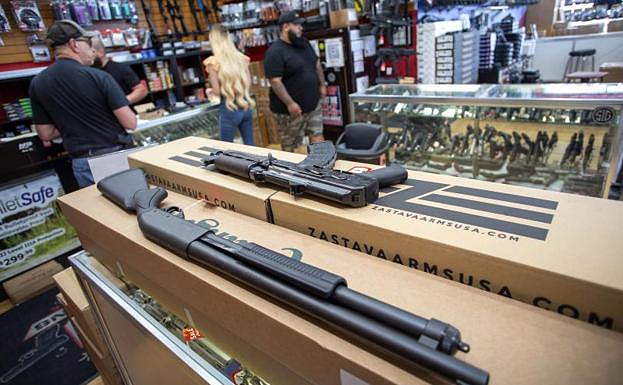 Donald Trump said it at the convention of National Rifle Association (NRA), where 30 million dollars was invested in his presidential campaign. The president nominated hundreds of judges to his cause, but he was specifically referring to three Supreme Court justices who have influenced US law for decades. Their decisions have tilted the majority in favor of the conservative side. They gave him the biggest victory the NRA has enjoyed since 2008.

Two New York residents sponsored by the gun lobby, Robert Nash and Brandon Koch, were upset at being denied permits to carry guns while visiting New York City. Only those who are able to demonstrate need and goodwill are allowed to carry guns. conduct. "What if I am in a dangerous area and need to defend myself?" Judge Amy Coney Barrett was questioned during the oral hearing.

These types of questions were expected to be asked by the conservative majority, which Tuesday showed its willingness to "continue dismantle [the walls of separation between state and Church]", Judge Sotomayor wrote in his dissenting opinion in case that forces Maine religious schools to be subsidized. This would cause another devastating blow to society even before the controversial ruling banning abortion.

The prophecy was fulfilled. Anyone can now get a license for concealed sidearm carry without the need to prove any good conduct or show any need. Those were the conditions that the Sullivan Law required for over a century. The Supreme Court declared Thursday that it was anti-constitutional because, despite its 108 year validity, it doesn't conform to the "tradition" of bearing arms that the country has.

The $30 million the NRA invested into Donald Trump's campaign paid dividends on Wall Street this Thursday. Smith's shares were up by 3%.

The US has seen a triple-digit increase in weapon production since 2000. However, it has also broken all sales records each year since the outbreak. The hunters' argument was defeated in large cities such as New York, Los Angeles, and Boston because of the need for the public to stop any altercation on the subway from turning in to a shooting. Yet, the police still seized over 3,000 weapons each year. These guns came from 17 different states in the first three months alone. Mayor Eric Adams, an ex-police officer, stated that guns will now be legally imported into Manhattan via the Van Wyck Expressway, which connects Brooklyn and Queens. The American Medical Association issued a warning that this would "cost lives."

‹ ›
Keywords:
SupremoAsestaGolpeControlArmas
Your comment has been forwarded to the administrator for approval.×
Warning! Will constitute a criminal offense, illegal, threatening, offensive, insulting and swearing, derogatory, defamatory, vulgar, pornographic, indecent, personality rights, damaging or similar nature in the nature of all kinds of financial content, legal, criminal and administrative responsibility for the content of the sender member / members are belong.
Related News