That thing looks like a giant menhir from Obelix. 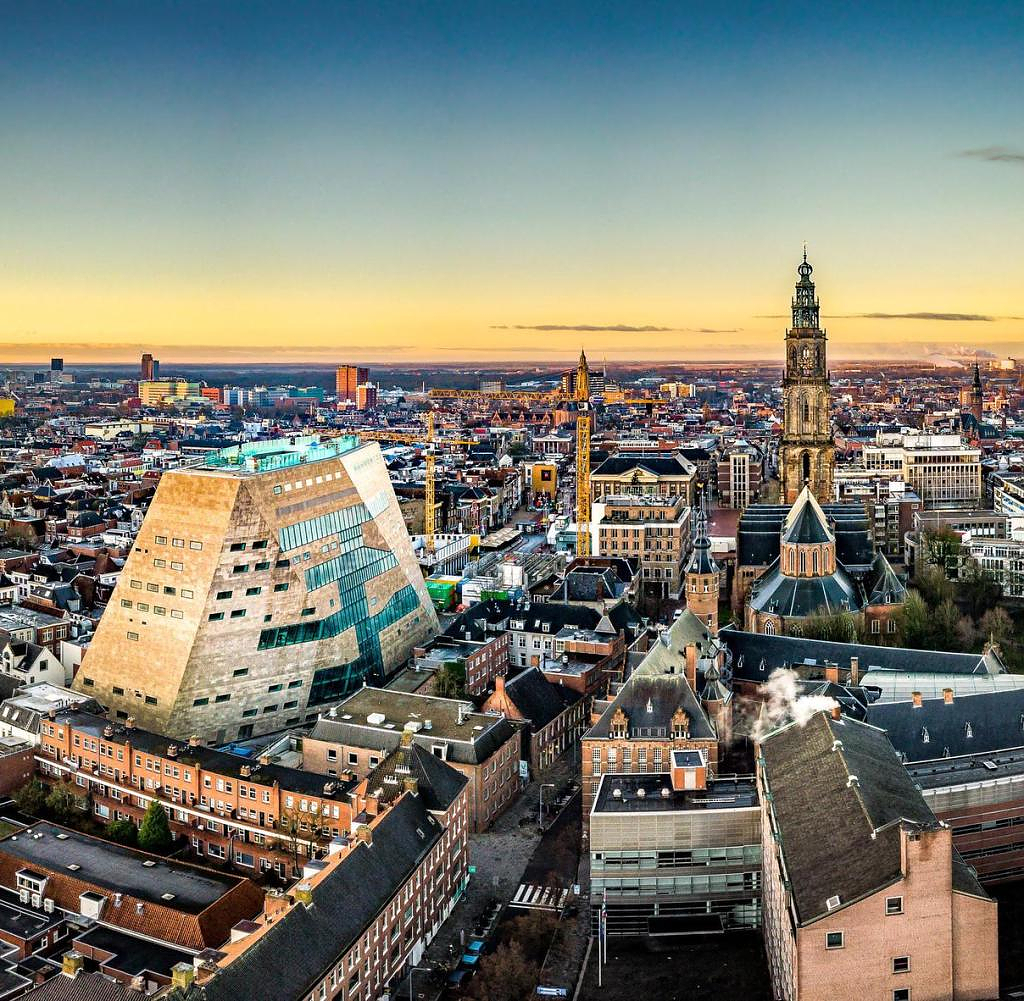 That thing looks like a giant menhir from Obelix. Even in Manhattan or London, this artificial boulder would draw everyone's attention, the architecture is so unusual.

But in the center of Groningen, surrounded by pretty little brick houses with white gables, the 45-meter-high block looks completely unreal. However, the people of Groningen seem to have gotten used to it. "Great, isn't it?" calls a cyclist who happens to be passing by. Yes, it's great.

Inside it looks like a fancy department store. Escalators lead to dizzying heights. Huge windows let the sun in. But nothing is sold. Is it perhaps a luxury lecture hall? This is indicated by the arena-like rows of seats on which young people in T-shirts and hoodies have made themselves comfortable with their laptops.

One floor up, workstations at tables offer even more comfort. Here, too, all users are apparently under 25.

Next level up: Okay, it appears to be a coffee shop, at least there is one here. But wait, the city library is also housed here. You want to try out the comfortable rotating wing chair straight away – preferably with an audio book.

And then there is a comic museum, a restaurant and a cinema. Perhaps the Groninger Forum could best be described as a stacked, horizontal city, with all sorts of facilities, meeting places and public spaces on different levels.

The most spectacular place is the viewing platform at the top. From here you can see far beyond the city limits over the flat country of the north-east of the Netherlands. Not Hollands! The provinces of North and South Holland in the west of the kingdom are far away for Groninger.

The Dutch are also not on good terms here, because the government in The Hague has benefited heavily from Groningen's natural gas for decades, which is now causing houses to sag and crack throughout the Groningen area. There are always earthquakes. That's why the people of Groningen have been insisting for a long time that the funding should be stopped.

At least the Groninger Forum seems absolutely earthquake-proof. The high-tech menhir is something completely new, which is also reflected in the fact that many international media reported on the opening at the end of 2019.

The British newspaper "The Guardian" wrote that this building shows for the first time that inner cities no longer have to be primarily geared towards retail. The success is undoubtedly there: the 1.3 million visitors targeted for the first year came in the first three months.

So Groningen is currently a trendsetter, and that's no coincidence. The city may be old, but despite all the historic buildings, it seems incredibly young - almost 60,000 of the 200,000 or so residents are students. This makes Groningen the youngest city in the Netherlands. The median age is 36, nationally it is 41.

During the lecture period, Groningen seems to be populated exclusively by students, especially during the week. It's a little different on Saturdays because that's when a lot of people from the surrounding area come to shop. On top of that, the people of Groningen are among the happiest Europeans, according to an EU study.

The fact that the city seems so lively also has something to do with its large catchment area: the nearest large city is unreasonably far away by Dutch standards. You can't just go somewhere else quickly. In the north of Groningen there are fields of potatoes and sugar beet, and eventually the sea behind them. Germany is to the east. And in the west and south stretches deserted farmland.

Groningen, on the other hand, pulsates. Strongest around the Grote Markt. Arson by the German occupiers and bombing by the Canadian liberators in 1945, shortly before the end of the war, resulted in two of its four sides being destroyed. In contrast to many other German cities, Groningen has consistently eliminated the subsequent building sins of the post-war period over the past few decades.

The new architecture is not historicizing, but fits wonderfully into the overall picture. This includes the always well-attended seat of the oldest Dutch student association "Vindicat atque polit" (Eng. preserve and improve), whose partnership can be recognized by the saying "Mutua Fides" (Eng. mutual trust).

The biggest attraction on the market is the city's most famous pub, "De Drie Gezusters" (The Three Sisters), which extends over several buildings. With room for 3,700 guests, it says it is “the largest pub in the Netherlands”, a kind of local Hofbräuhaus.

If you continue from the market, you will come to another large square behind the town hall, the Vismarkt. There is still a market here on most days. The square is dominated by the former grain exchange (Korenbeurs), which now houses a boring supermarket.

Standing in front of the building with its striking columns and then turning left leads to the city's prettiest shopping street, Folkingestraat. The old synagogue is also located here.

Another lovely street to stroll through, with many surprising little shops, is the Zwanestraat, just a 10-minute walk away, off the Grote Markt. If you get hungry, we recommend the Bellami's restaurant at Grote Kromme Elleboog 13.

The most striking building after the Groninger Forum is the Groninger Museum. The building designed by Italian architect Alessandro Mendini, which opened in 1994, lies like a futuristic ship between the main train station and the city center. The basic idea for the museum was not to build an art temple, but a labyrinth in which the boundaries between design, architecture, art and media are blurred.

Not only art is on display, but also Asian porcelain, for example, which slumbered on the seabed for centuries in a shipwreck belonging to the United East India Company (VOC) before it was recovered by divers in 1985.

A special attraction of Groningen is that busy streets and squares alternate with quiet courtyards and parks like the Martinikirchhof. The tower of the Martini Church is the symbol of the city. Opposite is the Prinsenhof, where the Orange Princes used to stay when they were in town. The city palace now houses a stylish hotel with a good restaurant. Behind it lies a freely accessible Renaissance garden, the Prinsentuin.

In the 17th and 18th centuries, Groningen and its environs formed a largely independent miniature republic, which in turn was part of the Republic of the Seven United Provinces. The province of Groningen was not subordinate to a monarch, but to the "Staten van Groningen" assembly of estates. For the Age of Kings this was comparatively democratic.

Other oases and retreats are former residential communities such as the St. Geertruids Gasthuis, originally a hostel for pilgrims, which later also accommodated the poor and the mentally ill. Living in one of these magical "Hofjes" is a special privilege.

Writer Jaap Krol has been enjoying it for more than 20 years. He lives in a 15th-century hofje, the Jacob and Anna inn. You could immediately transplant his dollhouse-like apartment to the Shire.

The door of his little kingdom squeaks when he opens it. Bookshelves line the walls, and there is a small kitchen at the back. The view of the blooming garden is fantastic. "You live in the city center here, but it's very quiet," he says. "And the rent is low because it's still a cooperative apartment, social housing so to speak."

Apparently it is also good for your health to live here: one of his previous tenants died in 1899 at the age of 107 - he had fought with Napoleon in Russia.

Translator Els Struiving moved from Amsterdam to Groningen many years ago. Her partner is from Bremen, so they were looking for something between the two cities. "That's how we came to Groningen."

But for her, that's not all that speaks for the city: "In Groningen you have everything that makes the Netherlands so special. The culture is at home here, the university. You have canals with magnificent town houses. It's not really a metropolis, but it has the feel of a big city.”

Then there is the mentality of the people of Groningen, which compares them to the simple medieval churches in the surrounding area: “From the outside, they look small and inconspicuous. But then when you come in and get to know them better, you realize what beauties they are.”

Getting there: Coming by car from the south via the comparatively little-used federal highway 31 to Emden. By train with the ICE to Arnhem, change there to a Dutch Intercity to Groningen.

Entry and corona situation: There are currently no restrictions for people entering Germany.

‹ ›
Keywords:
StädtebauGroningenArchitekturNiederlandeLänderporträtsStädteporträtsGroningerGrote MarktLondonSüdhollandNordReiseManhattan
Your comment has been forwarded to the administrator for approval.×
Warning! Will constitute a criminal offense, illegal, threatening, offensive, insulting and swearing, derogatory, defamatory, vulgar, pornographic, indecent, personality rights, damaging or similar nature in the nature of all kinds of financial content, legal, criminal and administrative responsibility for the content of the sender member / members are belong.
Related News