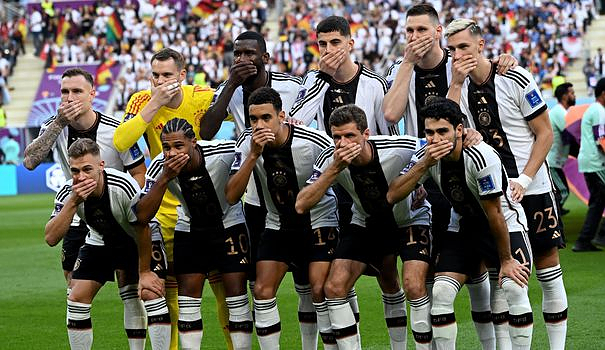 Arguing that "provocation is not the right path", that the rights of homosexuals are "a process", or regretting the "moral lessons" coming from the West, the president of Fifa Gianni Infantino clearly expressed his rejection of the inclusive "One Love" armband that the captains of seven selections, Germany, England, Wales, Netherlands, Belgium, Denmark and Switzerland wanted to wear.

On Monday, he won a first round: these countries backed down from the threat of "sporting sanctions". Fifa did not give details on the said sanctions but in an interview with the English-language site The Athletic, the general manager of the Danish Federation Jakob Jensen said that, that day, "the situation got even worse when the Fifa asked England for an emergency meeting "just before their match against Iran.

"They made it clear that there would be sporting penalties and at least a yellow card if a player wore the armband" and that "the captain could have been given a multi-match suspension," said the official.

In fact, the Englishman Harry Kane appeared on the lawn against Iran with the armband provided by Fifa, struck with a heart and with much more consensual messages.

But, on Wednesday, from the stands of the Khalifa stadium, Gianni Infantino witnessed the German rebellion when the players, including captain Manuel Neuer, ostensibly put their hands in front of their mouths, a sign of imposed silence, on the traditional photo of team before kick-off.

Hansi Flick's team was under other pressure than Fifa, which came from home. In Germany, many voices have indeed been raised to call on Mannschaft players not to give in to the instance of world football. The supermarket chain REWE has indicated that it no longer wants to extend its partnership with Mannschaft after the decision not to wear the "One Love" armband.

The Germans have prepared their case well. As the teams prepared to enter the pitch, ARD commentators warned viewers that something was about to happen. And, at the time of the official photo, the players made the gesture which will remain one of the highlights of the competition whatever happens.

Meanwhile, in the official gallery, the Minister of the Interior in charge of sports Nancy Faeser, seated just to the left of Infantino, donned the famous "One Love" inclusive armband, before tweeting the photo on social networks . And put on a jacket covering the headband.

At the same time, the German federation sent a scathing press release on social networks to affirm that "human rights are not negotiable", an expression used in the morning by the government spokesperson in Berlin. "To forbid us to wear the armband is to forbid us to speak. Our position is clear", according to the text.

Asked by AFP, Fifa did not react to this German mutiny.

For his part, Dutch midfielder Davy Klaassen congratulated the players of the Nationalmannschaft: "Germany expressed themselves magnificently, in a catchy and original way", he judged at a press conference. "It's a good way to do it."

Whatever the continuation of the soap opera of the armband, it will leave traces in the relations between Fifa and the European federations concerned, which have not accepted what they consider to be authoritarianism.

"There is a presidential election in Fifa. There are 211 countries affiliated to Fifa and I understand that 207 countries support the current president (Infantino). Denmark is not one of them," said Jesper Moller, the president of the Danish Federation. "I'm not just disappointed. I'm angry. I've never experienced anything like this."