Gilberto Gil celebrates love in an opera-song created in Paris

"It's a lot of emotions, I had never played with such a set", confides in perfect French the 80-year-old artist met by AFP at the end of a rehearsal. 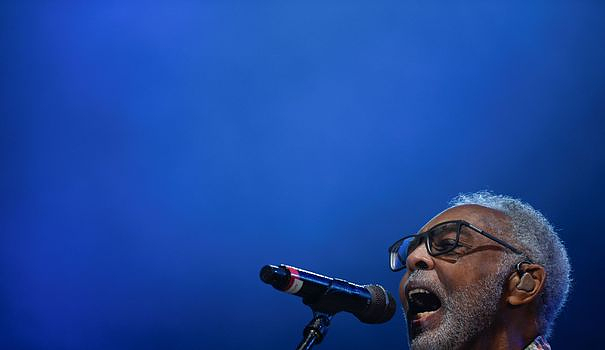 "It's a lot of emotions, I had never played with such a set", confides in perfect French the 80-year-old artist met by AFP at the end of a rehearsal.

A shiver runs through the audience a little earlier when the Brazilian legend, seated in the front row, puts his delicate voice on his guitar chords in front of the Choir and the Philharmonic Orchestra of Radio France. That is 150 musicians.

"Amor Azul", opera-song (mixture of popular and classical music) in two acts co-signed Gilberto Gil and his accomplice conductor Aldo Brizzi, is given in world premiere from this Friday to Sunday at the Auditorium of RadioFrance.

"The welcome from Radio France and the possibility of leaving here, from Paris, in order to then be able to play this opera-song in Europe and outside, gives the project a great solidity", rejoices the author of standards like " Toda Menina Bayana".

The libretto is inspired by Hindu poems and deities like Krishna. Not surprising for this familiar with Indian spirituality, an extension of a meditation-refuge when he was imprisoned under the Brazilian dictatorship in the 1960s.

But this canvas is only a pretext to stir up his favorite themes, love, transmission and interbreeding. "Love is everything, love is more important than death", smiles the singer under his rectangular glasses.

The "mix" dear to the Brazilian is found in the vibrations of this opera-song. Alongside the Philharmonic Orchestra of Radio France, there are Brazilian percussionists, opera singers from Bahia, not to mention Indian dancers. Aldo Brizzi has no trouble leading all these beautiful people, since this Italian who lived in Brazil is also a polyglot.

"Just now, sitting on this stage, with all these musicians, I thought of The Who who had also played a long time ago with a symphonic ensemble", laughs Gilberto Gil. "Tommy", a rock opera by the British group, was transposed with a string and wind ensemble in the 1970s.

"Amor Azul" is not rock but more universalist, since Gilberto Gil also evokes "European influences, coming from Italy, Portugal, France and Spain, which are very present elements in the music of Brazil and other ingredients oriental".

Sitting to the left of the star on stage is another acoustic guitarist, his son Bem Gil. "It's natural for him to be here, he's an already well-trained musician, he's done a lot of projects with me, with a pop group, and for him it's a very important challenge, the opportunity to play with a set of this size", breathes his father.

- "Meaning of the word progress" -

Transmitting is essential for this former Minister of Culture in Brazil. "I was in a Ministry of Culture turned towards modernity, like Jack Lang had been in France, the man of revolutions like the Fête de la Musique", recalls Gilberto Gil who held this portfolio under a previous mandate. Lula, again re-elected to the Brazilian presidency.

"We went through a difficult period with the arrival of the hard right (and the presidency of Jair Bolsonaro, editor's note), which reduced the freedom and resources of all of Brazilian cultural and social life," he said. -he.

"For Bolsonaro it was all about business, capitalism, profit, he lacked the deeper understanding of what a whole needs, like the meaning of the word progress, the redistribution of wealth."

"The return of Lula, with his experience, his character, his accuracy, is the return of hope", concludes Gilberto Gil.