Germany, the new dream destination for legal migrants from Tunisia

This growing exodus -- with 5,474 work permits granted by Germany to Tunisians from January to October 2022, after 4,462 in 2021, and 2,558 in 2020 -- is stimulated by an absence of quotas and increased recognition in recent years of foreign diplomas, including pre-Bac qualifications. 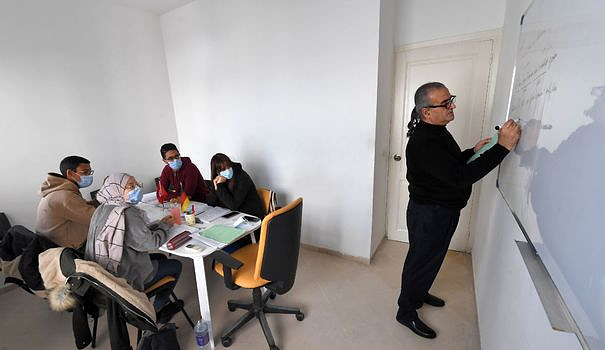 This growing exodus -- with 5,474 work permits granted by Germany to Tunisians from January to October 2022, after 4,462 in 2021, and 2,558 in 2020 -- is stimulated by an absence of quotas and increased recognition in recent years of foreign diplomas, including pre-Bac qualifications.

Germany, a country with a very low birth rate, has “enormous labor needs, not only in health or IT, but also in the hotel and catering industry, construction, the laying of fiber optics or driving heavy goods vehicles," Narjess Rahmani, director of the emigration agency "Get In Germany," told AFP.

In sectors under pressure, some employers provide the candidate with an employment or apprenticeship contract to facilitate obtaining the visa, and even finance their basic language training (level B1, approximately six months of German).

Yeft Benazzouz, director of the Yeft language school, has seen demand for German lessons skyrocket since 2020.

"Before, I had groups of one or two people and it went up to six or seven," he says. Even if since the summer, the pace has slowed down due to high inflation and falling purchasing power in Tunisia.

In addition to the language, Mr. Benazzouz teaches the basic behaviors to adopt, willingly using proverbs to mark the spirits like "Pünktlich ist schon spät" ("by the hour it's already late").

"To go to Germany, you have to understand the mentality: they are hard workers, and they rely a lot on the motivation of young people, the seriousness of the work", underlines Ms. Rahmani.

According to her, Tunisians integrate very easily: "Because we had French colonization, young people are used to foreign languages. We are also very open to other cultures, through tourism and the cultural mix throughout of our history".

Yeft students are often highly qualified, in a country where initial training is renowned and where unemployment among young graduates reaches peak levels: around 30%.

Hydraulic engineer Nermine Madssia, 25, opted for Germany as her future nurse sister, abandoning offers in France "where there is anti-Muslim racism", according to this young girl who wears the veil.

She thinks she will find "respect and consideration with a good salary", unlike Tunisia, where the average salary is capped at 1,000 dinars (around 300 euros) and where even a computer engineer - a highly prized profession - touches barely twice that amount at the start of his career.

Tunisia is going through serious economic difficulties with sluggish growth (less than 3%) and a huge public debt, dug by the Covid, then the war in Ukraine. All coupled with a political crisis since President Kais Saied seized all power in July 2021.

Result: one in two young people wants to leave, either legally (more than 40,000 engineers have emigrated in the past five years, more than 3,300 doctors, etc.) or illegally with 16,000 Tunisians who have arrived in Italy illegally since the start of 2022.

Elyes Jelassi, 28, packs his suitcase, taking care to insert olive oil and spices, "a piece of Tunisia", before flying to Germany.

Under the eyes of his family gathered in their town of Korba, this nurse assures that initially, "he did not think of leaving the country".

"After three years of studies and internships in several hospitals, I decided not to make a career in Tunisia. Abroad it will be better," he told AFP.

Recruited from a distance, Mr. Jelassi won a work contract in Germany in a clinic in Wiesbaden (west), which will even house him for free for the first six months.

In addition to the salary argument, he is convinced of finding more favorable conditions there than in Tunisia where "hospitals suffer from a lack of equipment, which causes conflicts with citizens, and makes work stressful".

But he does not imagine "staying for life" in this country, and would like to "return to Tunisia at the age of 50".