The Social Democrat, at the head of a coalition formed with environmentalists and liberals, had gathered on Saturday, until late in the evening, the main figures of the government to finalize this plan, which had been awaited for several weeks. 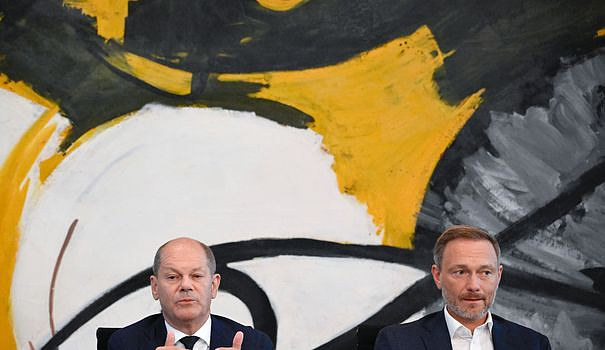 The Social Democrat, at the head of a coalition formed with environmentalists and liberals, had gathered on Saturday, until late in the evening, the main figures of the government to finalize this plan, which had been awaited for several weeks.

Repeating his mantra that the Germans will "never be alone" in the face of the energy crisis, Olaf Scholz unveiled a series of measures, including a one-off energy check of 300 euros for millions of pensioners and 200 euros for students.

Inflation rose again in Germany in August, to 7.9% over one year, still driven by soaring energy prices in the wake of the war in Ukraine.

In October, a tax on gas intended to avoid the bankruptcy of German energy groups must come into force. It will lead to a further increase in the energy bill.

The head of Germany's central bank, the Bundesbank, has deemed it likely that inflation will reach 10% by the end of the year, a first since the 1950s.

As in other European countries, the rise in prices is fueling public concern and calls for demonstrations, mainly at the initiative of the far right or the far left, are worrying the government.

Since the beginning of the Russian invasion of Ukraine at the end of February, the government of Olaf Scholz has already released two trains of household aid totaling some 30 billion euros.

The announcement of this new plan has been postponed several times, illustrating the friction between the three parties in the ruling coalition for nine months.

Symbol of the difficult compromise found: Olaf Scholz's commitment to tackle "speculation" on the energy market and the windfall profits made by producers who "benefit" from record gas prices, in the words of the chancellor.

This question has divided the government since the beginning of the summer. Ecologists and social democrats want a tax on the billions earned by certain groups. The liberal camp, represented by Finance Minister Christian Lindner, is fiercely opposed to it.

The government finally decided to plead for the introduction, at European level, of a compulsory contribution to be paid by companies in the energy sector, a measure “not coming under tax law”, Mr Lindner explained.

EU member states are due to meet next week to discuss reform of the European energy market and possible initiatives to quickly reduce consumer bills.

The German government says it is ready to go it alone if no agreement is reached at European level, but Olaf Scholz said he was "confident" in the possibility of an agreement between the Twenty-seven.

This compulsory contribution could bring in "several tens of billions of euros", assured the Minister of Finance.

Among the other measures of the aid plan, the government provides for the payment of heating costs for people benefiting from housing allowances and an envelope of 1.5 billion euros to set up a new rebate on public transport.

This is to replace the popular nine-euro monthly subscription which the Germans were able to enjoy until the end of August on the entire bus and train network, excluding high-speed lines.

The financing of this new ticket would be carried by the State and the regions and the future subscription should cost "between 49 and 69 euros".

In Europe's largest economy, the threat of a gas shortage this winter seems to be receding. The country is struggling to reduce its dependence on Russia, which was still supplying it with 55% of its gas imports in February, and considers that its efforts are starting to pay off.

"We will be able to face this winter," assured Olaf Scholz, despite the prolonged stoppage, announced Friday by the energy company Gazprom, of the Nord Stream gas pipeline which links Russia to northern Germany.