George Russell's premiere in the Mercedes one-two in Sao Paulo

In the spectacle of São Paulo, George Russell raced to his maiden victory in Formula 1. 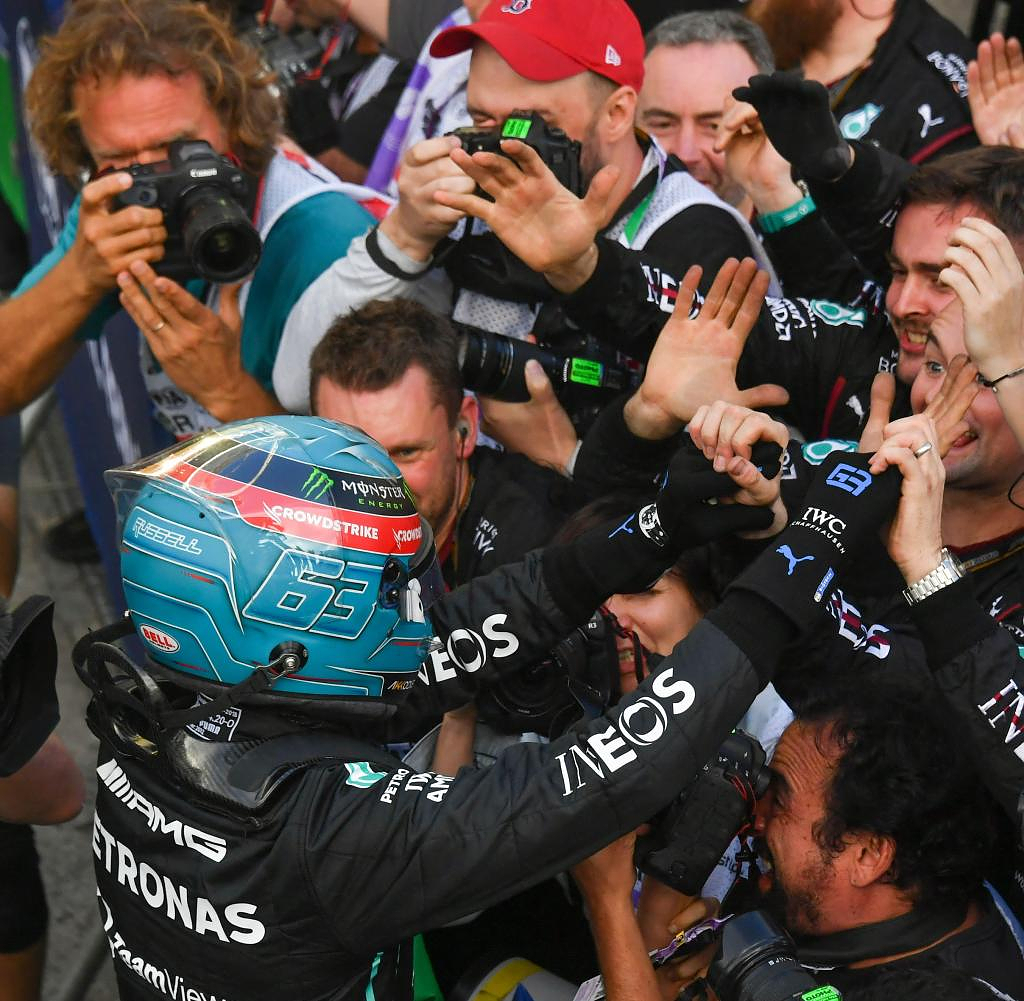 In the spectacle of São Paulo, George Russell raced to his maiden victory in Formula 1. After a chaotic start with a safety car phase, the impressively driving Englishman even kept his charging team-mate Lewis Hamilton at bay and gave Mercedes its first Grand Prix success of the year in Brazil. Russell was just 1.5 seconds faster than the second Silver Arrow at the finish.

Third in the Interlagos thriller was Carlos Sainz in a Ferrari. An early crash with Hamilton meant that Max Verstappen, who had long been world champion, was unable to get past sixth place in the penultimate race of the season.

Aston Martin driver Sebastian Vettel missed the points in eleventh place in the penultimate Grand Prix of his career. Mick Schumacher's weekend was an emotional roller coaster. 20th place in qualifying, in which his teammate Kevin Magnussen raced to a sensational pole position. Then the 23-year-old, whose future at Haas is to be officially clarified next week, fought his way up to twelfth place in the sprint. Schumacher was 14th - again no points.

"Usually, victory isn't possible, but I still hope so," said Verstappen a few minutes before the red lights went out. Complaints about the balance of his Red Bull and the wrong tire choice in the sprint only allowed him to start from third place.

The two-time world champion had the silver duo in front of him for the first time this season. Sprint winner Russell and Hamilton in second hopes for the silver victory coup. "I love it here," said Hamilton, recently also an honorary citizen of Brazil, in front of the fans. "I hope we can give you a good race."

As so often, Interlagos had it all. A contact between Magnussen and McLaren's Daniel Ricciardo alerted the safety car after just a few bends. Russell led the field ahead of Hamilton, Red Bulls Verstappen and Sergio Perez. Vettel improved by one place to eighth, Schumacher in tenth place.

Russell also won the restart. Hamilton and Verstappen, on the other hand, collided in turn two. Car particles flew into the air after the impact. "He didn't leave me any space," complained the Dutchman, who had also attacked the Englishman uncompromisingly. There had already been a crash between the two pilots in Brazil last year. Hamilton even crowned a crazy catch-up race over the entire weekend with the Grand Prix success.

Verstappen got a new front in the pits and a five-second penalty for the accident. "Where should I have gone?" complained the Red Bull star. Hamilton, on the other hand, was able to continue. Vettel was even on course for the podium at times, while Schumacher was just in the points.

Russell extended his lead over Perez to almost 3.7 seconds before the Mexican pitted on lap 24, leading the pack and putting on medium tires. Verstappen with a botched stop and the Mercedes frontman followed.

Hamilton stayed outside and took the lead. "It's getting dark out here, is there any rain to be expected?" he asked his crew. No, nothing to see. On lap 30, the seven-time world champion also pulled in to change tires. He then took up the pursuit of his compatriot Russell in fourth place.

Hamilton worked his way up. On lap 45 he grabbed Perez and was his teammate's first hunter. Hamilton was still missing about ten seconds. In the 49th lap he got the soft tires in the pits. "Why, what the hell...?" fumed Hamilton, who actually wanted to stay outside. Russell came in one lap later.

Lando Norris had to park his McLaren on the course due to a defect. Again, the safety car was used to recover the car. The field contracted, fresh tension for the final phase!

"You're driving against each other, but please be respectful," was the Mercedes announcement to Russell and Hamilton for the final laps. But there was no longer a tricky duel between the two. Russell crowned his race with the Grand Prix victory.

‹ ›
Keywords:
Formel1GrandPrixHamiltonLewis
Your comment has been forwarded to the administrator for approval.×
Warning! Will constitute a criminal offense, illegal, threatening, offensive, insulting and swearing, derogatory, defamatory, vulgar, pornographic, indecent, personality rights, damaging or similar nature in the nature of all kinds of financial content, legal, criminal and administrative responsibility for the content of the sender member / members are belong.
Related News