The Mediterranean Ecologist Group denounced the "large volume" of sand being extracted by the Provincial Coastal Service on Playa Serena. 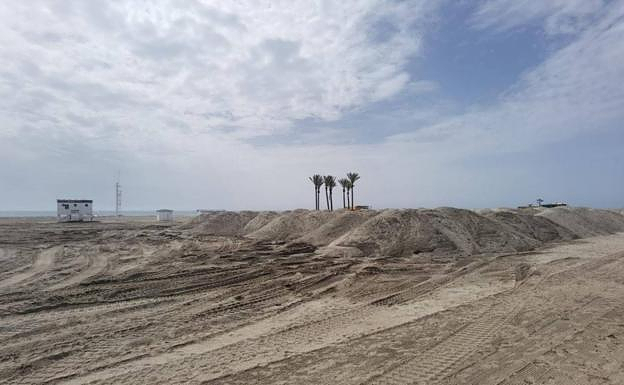 The Mediterranean Ecologist Group denounced the "large volume" of sand being extracted by the Provincial Coastal Service on Playa Serena. This sand will be used to replace that which was lost on Aguadulce. This is not the first extraction to cause controversy among neighbors and groups. The association asked for an end to this practice and has requested that other solutions be explored.

GEM warned that the operations are taking place "practically at the edge of Punta Entinas Sainal", an area "whose coastline is in decline, among other reasons, because of Almerimar breakwaters."

The environmental group acknowledged that the measure was technically feasible but not morally acceptable. "It involves dressing a saint in undressing another person, but it is very unlikely that the undressed person can be redressed. The beneficiary only lasts little, and that is what the association warned.

He also mentioned that the storms that cause the erosion of sand will "becoming increasingly frequent and intensified and also affect the extraction zone, so these extractions may exacerbate their effects."

Costas was also reminded by the GEM that the Puntaentinas Natural Reserve is a Special Protection Area for Birds and a Site Of Community Importance. It is also part of the Ramsar Convention. It is also at risk of regression. Therefore, the GEM suggested that sand from the Levante protected area be taken.

This organization says that this intervention is contributing to the "greater deterioration" of the protected area. Accordingly to them, the Andalusian Government and the State have a legal obligation to protect it and to avoid any actions that could damage it.

The GEM stated that this is because there is not much chance of regeneration of this area. This is despite the fact that "there is no sediment from the interior" and "a loss is occurring in the vicinity". This was already mentioned in the report of Strategies for the protection coast in the face climate change prepared by the Ministry.

The GEM also criticised the Roquetas City Council's cleaning of beaches. It claimed that they "remove a substantial volume of sand that, while it is supposed to be returned, doesn't usually do so." The cleaning did not remove all of the lost, but it did provide a sufficient amount to "at least contribute to not making the situation worse", the GEM stated in a letter to this organization.

‹ ›
Keywords:
AdvierteDanosExtraerArenaPlayaSerenaRegenerarAguadulce
Your comment has been forwarded to the administrator for approval.×
Warning! Will constitute a criminal offense, illegal, threatening, offensive, insulting and swearing, derogatory, defamatory, vulgar, pornographic, indecent, personality rights, damaging or similar nature in the nature of all kinds of financial content, legal, criminal and administrative responsibility for the content of the sender member / members are belong.
Related News