Gas crisis: in Berlin, the coal rush in anticipation of winter

The dreaded shortage of Russian gas in the wake of the war in Ukraine has caused an unexpected enthusiasm among individuals for this method of heating despite its harmfulness. 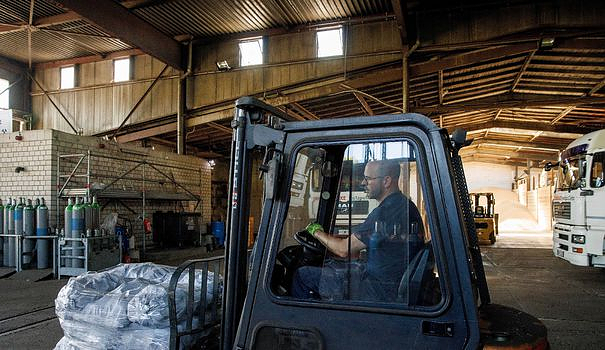 The dreaded shortage of Russian gas in the wake of the war in Ukraine has caused an unexpected enthusiasm among individuals for this method of heating despite its harmfulness.

Consequence for this 46-year-old man, boss of the century-old family business Hans Engelke Energie: "the holidays will wait".

You have to take orders, organize truck deliveries - scheduled until October - and prepare the products for those who come directly to buy their fuels from your warehouse.

On a hot August day, he weighs and bags loose coal amid the dust and din of his filling machine, then arranges the bags on pallets, awaiting customers.

They are often elderly people, sometimes entirely dependent on this fuel and living in old dwellings that have never been renovated, or lovers of the heavy heat emanating from old stoves.

"Those who heat themselves with gas, but who still have a stove at home now all want to have coal", a phenomenon, according to him, generalized in Germany.

Jean Blum is one of them. That day, this 55-year-old man, hair and white beard in a mess, loads 25 kg bags filled with the precious black stones in his trailer.

"I'm buying coal for the first time in many years," he told AFP. Since his home is equipped with gas, he sometimes lights his stove, but only with wood.

With the increase in the price of gas, which will be exacerbated from October when the operators will be able to pass on the rise in energy prices to the consumer, he wants to ensure a safety net.

"Even if it's bad for your health, it's still better than being cold," he says.

If you have to pay 30% more than before, coal is also cheaper than wood, whose prices have more than doubled.

"I'm worried, I wonder if there will be enough gas for everyone", he also adds, while Vladimir Putin has already partially closed this tap on which Germany is very dependent.

Black fuel is experiencing, willy-nilly, a comeback in the country. The German government has already resolved to make greater use of power stations to guarantee the huge electricity needs of its industry.

Even if he assures not to give up his objective of abandoning this polluting energy in 2030, and excludes "a renaissance of fossil fuels, in particular coal", as Chancellor Olaf Scholz recently declared.

With the appearance of all these new private customers, production is struggling to keep up, and many small coal merchants in the capital have nothing left to sell.

Located in the Lusatia mining basin, to the east, the site provides coal stones to DIY stores and fuel sellers.

Production has jumped 40% since January, he said, but demand is strong everywhere and the situation should remain tense at least until this winter.

Especially since the other factory supplying the market in Germany, based in the Rhine basin, will cease production at the end of the year, reducing supply.

“I dread the winter a bit,” admits Mr. Engelke. Currently, people are relatively relaxed when they learn that they will have to wait at least two months before being delivered, he says.

"Things will be drastically different when it starts to get cold outside."