Gas: Capping the price can only work if the EU rallies other countries, says Germany

Setting a maximum price "always carries the risk that producers then sell their gas elsewhere, and that we Europeans end up with less gas instead of more," the Chancellor told the Bundestag ahead of a European summit. 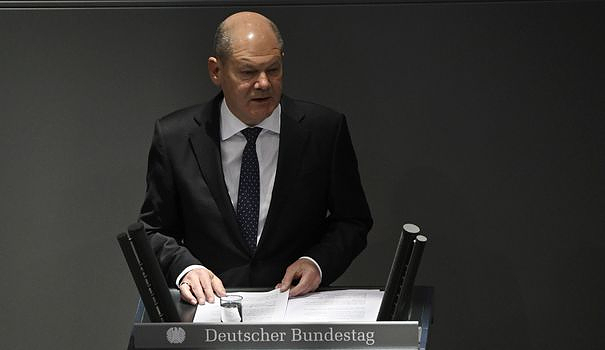 Setting a maximum price "always carries the risk that producers then sell their gas elsewhere, and that we Europeans end up with less gas instead of more," the Chancellor told the Bundestag ahead of a European summit.

"That's why the EU must coordinate closely with other gas consumers, for example Japan and Korea, so as not to compete with each other," he said.

Several proposals from the European Commission to reduce energy prices will be discussed Thursday and Friday at a summit of heads of state and government in Brussels.

Fifteen states, including France, had called for a price cap on European gas imports in early October - but Berlin is fiercely opposed to it, fearing to aggravate LNG supply tensions in a tight global market, just like the countries of Central Europe (Austria, Hungary, etc.) still dependent on Russian hydrocarbons and fearing that Moscow will completely close the tap.

Olaf Scholz on the other hand welcomed, in front of the German deputies, the proposals of the European Commission "aiming to create purchasing groups of European companies to buy gas in common".

The Chancellor renewed his appeal to producing countries to act to limit the surge in prices: "I am convinced that countries such as the United States, Canada or Norway, which stand in solidarity alongside Ukraine, have interest that energy does not become unaffordable in Europe".

"Putin also uses energy as a weapon," he repeated. But the chancellor assured that this did not undermine the determination of Westerners to support Ukraine.

Russia's "scorched earth tactic" "only strengthens the resolve and perseverance of Ukraine and its partners", he said.

"The terror wrought by Russian bombs and missiles is an act of desperation" on the part of Moscow, according to the German chancellor.

"Ukraine will successfully defend itself. And we will support it - as long as it takes!" he added. Thus, thanks to the commitment of the West, the "financial needs" of Ukraine between now and the end of the year are "virtually covered", assured Olaf Scholz.