Gangs in El Salvador: 10,000 soldiers and police surround a city

"From now on, the commune of Soyapango is totally surrounded. 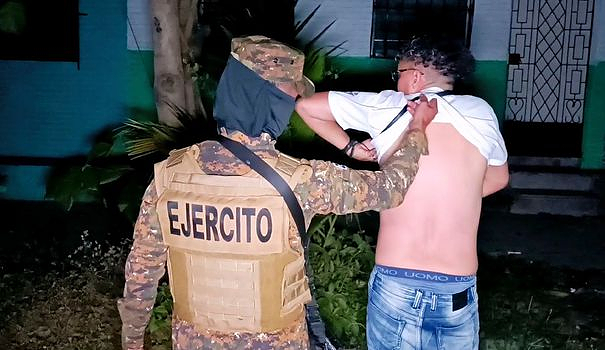 "From now on, the commune of Soyapango is totally surrounded. 8,500 soldiers and 1,500 agents have surrounded the city" of 242,000 inhabitants, located east of the capital, wrote President Bukele on his Twitter account.

The president announced on November 23 that towns would be surrounded so that the military could search homes one by one and arrest gang members. Soyapango is the first city where this procedure is applied.

Soldiers and police were stationed from dawn on all the access streets to the city, prohibiting anyone from entering or leaving without being checked. The security forces are responsible for arresting one by one "all the gang members who are still there", President Bukele said.

Military and police vehicles roamed the streets, while drones hovered over the area looking for gang members. Forty "checkpoints" have been set up in the municipality of Soyapango, said Salvadoran Defense Minister René Merino.

"It surprised us, they ask us for our identity papers to verify our home, but it's okay, it's for our safety," said a resident, Guadalupe Perez, 53, to AFP.

The police also stop the buses in order to check each of the passengers.

"Citizens have nothing to fear and can continue their activities in peace, reassured President Bukele. This operation is launched against criminals and not against honest citizens".

The encirclement of cities in order to "extract" gang members from them is part of the security plan launched by the government. “People see that the measures taken are giving results, argued criminologist Ricardo Sosa. It is not surprising that they mainly support these operations because they themselves have suffered from the gangs”.

75.9% of Salvadorans support the state of emergency and 9 out of 10 believe that crime has dropped, according to a survey by the Central American University (UCA).

Some 58,000 suspected members of criminal gangs, the dreaded "maras", have been arrested in El Salvador since the proclamation at the end of March by President Bukele of the "war" against these gangs which reign terror in the country.

To cope with the influx of prisoners, the prison administration has undertaken to build a gigantic prison for 40,000 suspected criminals in Tecoluca, a rural region in the center of the country.

Soyapango has for years been considered an insecure town due to the presence of gangs. However, the measures applied by the Bukele government have resulted in "a huge improvement in security", said Mayor Nercy Montano earlier this week.

Established at the end of March after a wave of 87 assassinations attributed to the "maras", the state of emergency allows arrests without a warrant, raising criticism from human rights organizations.

It was extended by Congress until mid-December.