"When David Séchan (brother of the singer) thought of me (for the anthology "Putain d'coffret"), it made me happy, I was touched and I thought that indeed, it was coherent", confides to AFP this figure of the 9th art, grand prize of the Angoulême comic book festival in 1992. 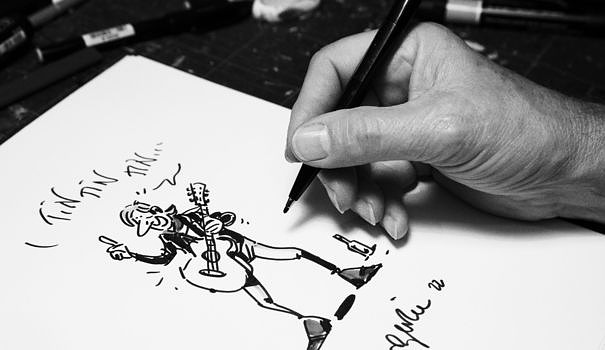 "When David Séchan (brother of the singer) thought of me (for the anthology "Putain d'coffret"), it made me happy, I was touched and I thought that indeed, it was coherent", confides to AFP this figure of the 9th art, grand prize of the Angoulême comic book festival in 1992.

From the 1980s, Frank Margerin made a name for himself in comics with his emblematic character, Lucien (the album "Radio Lucien" was released in 1982), a rocker's banana, perfecto, who gravitates in a Parisian suburban setting close to that of songs by Renaud from the "Laisse concrete" or "Marche à l'ombre" period.

"We have a bit of the same universe: the suburbs, the hooligans, guys who have their jackets robbed", continues the contemporary of the musician (both are 70 years old).

In Renaud's album "Laisse concrete", there is even the song "La bande à Lucien".

The singer with the "wild chetron", one of his nicknames, even evokes in this piece a certain Riton, the name of a character that we also come across in Margerin's comics.

"As a kid, I had a friend named Lucien, that's how I thought of this first name for this character; it was when I listened to the song again later that I realized that Renaud had also put on a Riton, but we had not consulted”, smiles the designer.

Margerin also dabbled in music, on a more modest level, as a member in the 1980s of a rock group, Dennis' Twist, made up of cartoonists.

"We met on TV sets, Renaud was in full glory, we poor designers making music; and he came to see me to find out if his performance was good. It surprised me, he was not never sure of himself."

A "good feeling" passed between the two men in the 1980s. In 1985, Margerin designed the cover for the charity maxi 45 rpm "Ethiopia" by the collective "Chanteurs sans frontières", a song written by Renaud.

Then, a comic book publisher had the idea of ​​one of the first works of its kind dedicated to a singer, Renaud, in 1986, "La bande à Renaud/Les belles histoire d'onc' Renaud".

"At first I refused, I said to myself it's an opportunistic thing", recalls Margerin. "Then I say to myself shit, all the designers play the game and I'm not in it, Renaud will think that I don't like him! (laughs), so I go and I even did the cover."

This blanket has become iconic, with Renaud's bowed legs from behind. It is this image that David Séchan asked Margerin to adapt for the poster of the exhibition devoted to his brother at the Philharmonie de Paris two years ago ("Renaud, Putain d'expo").

For "Futain d'coffret, Margerin thought of "crobard-style illustrations (sketches)" for the different covers (6 studio albums and 3 live albums, an 80-page booklet with all the lyrics, more than 50 unpublished drawings , as well as a 60 x 60 cm poster).

"Renaud's songs are like a sketchbook", slips Margerin, who shares with the singer a great tenderness for his characters and a hard tooth against the "beaufs".

"Dogs, but not with 36 colors, it wouldn't have made sense, black, white and red, the color of his bandana."

We thus see a red flipper on the cover of "Laisse Béton" or a red dress for "Ma gonzesse". We also obviously think of Renaud's song "Banlieue rouge".

In addition to his anthology box set, Renaud released an album of covers "Métèque" in the spring, where he revisits Georges Moustaki or Jean Ferrat in his dented voice.