Fuels: strikers maintain their positions despite the threat of government requisitions

"When there are proposals for negotiations, you have to seize them. 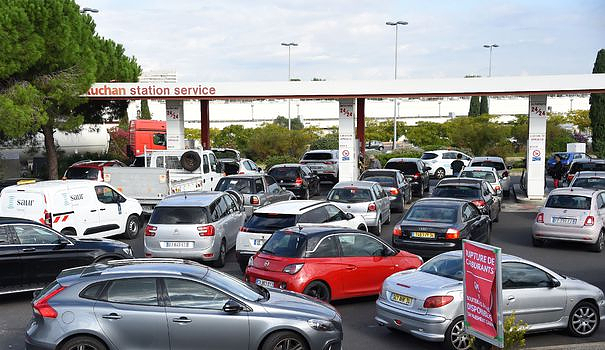 "When there are proposals for negotiations, you have to seize them. Otherwise it's no longer a strike to obtain results, it's quite simply a blockage of the country, and that's not acceptable", declared the Minister of Economy and Finance Bruno Le Maire, on France Info.

"If the CGT categorically refuses to engage in this discussion, we will have no other way than to requisition the necessary means to release the deposits and operate the refineries, quite simply because our compatriots cannot be the collateral victims. of a social conflict between a trade union organization, the CGT, and a private company", added the minister.

"The government is calling for all the blockages to be lifted without delay. Otherwise, we will take our responsibilities, that is to say that we could be forced to lift them", added the spokesperson for RTL. government Olivier Véran, the day after an emergency meeting in Matignon.

He made the difference between the situation at ExxonMobil, where "there is no longer any reason" for blocking after the agreement between management and the unions on Monday, and at TotalEnergies, where "the CGT continues to call for blocking" , which "we consider excessive and abnormal".

"The management of Total is right to ask for the lifting of the blockages before discussing", according to him.

“This morning, the employees voted again by a large majority for the continuation of the strike, we are still awaiting details in terms of negotiations by the management”, for his part noted Eric Sellini, CGT coordinator for TotalEnergies.

The group made $10.6 billion in profits in the first half.

The Normandy refinery, the fuel depot in Flanders, near Dunkirk and the "bio-refinery" in La Mède (Bouches-du-Rhône) have renewed the movement, to which motorway service stations from the Argedis network have joined, subsidiary of TotalEnergies.

- "Challenging the right to strike" -

On the Esso-ExxonMobil side, the two refineries of Notre-Dame-de-Gravenchon (Seine-Maritime) and Fos-sur-Mer, renewed the movement, at the call of FO and the CGT, despite the signature the day before a wage agreement by two majority organizations at the level of the group but not of the refineries, indicated the CGT.

In the event of a requisition, "we will go to court to have them canceled", assured Mr. Sellini, while the CGT of Esso-ExxonMobil denounced "a questioning of the right to strike".

From north to south of France, the same scenes are repeated: closed stations, endless queues, rising prices and low morale.

Just refueled by tanker Tuesday morning, the Casino de Basso Cambo service station, on the outskirts of Toulouse, was stormed by motorists on Tuesday.

Twenty cars and vans wait about 40 minutes to fill up. "We have done about ten stations since yesterday without being able to put diesel in," says Ramzi Soltani, 33, a tiler, whose company had to cancel construction sites because of the fuel shortage.

A waste of time, the motorists were finally left empty-handed due to a malfunction of the pumps of this station, noted an AFP journalist.

"We are not here to block the lives of all French people but to demand decent living conditions," said Lionel Arbiol, spokesperson for the CGT Esso, on the sidelines of a "large gathering" at the call of the CGT of Esso Fos-sur-Mer and Total La Mède on Tuesday morning, in which nearly 200 demonstrators took part from 7:30 a.m., in front of the Esso refinery to begin with.

Mr. Véran estimated that finding "normal functioning" in the most affected regions would "take a few days", and assured that "this will be the case within 15 days", i.e. before the All Saints' Day holidays.

He also considered it abnormal that "a few strike profiteers" have caused "the prices of gasoline at the pump" to jump in certain stations.

The government "discusses with Total with a view to there being an extension over a few days of the rebate" put in place by the group, according to the spokesperson.

The oppositions accused the government in this crisis: the right and the far right criticizing a "lack of anticipation" and a "febrility", when the left denounced "threats for the employees but (of) caresses for the bosses "