Fuels: continuation of the strike this weekend at TotalEnergies

The strike had already been renewed on two sites, until Tuesday for the Normandy refinery located near Le Havre, the largest in France, and Wednesday for that of Donges (Loire-Atlantique). 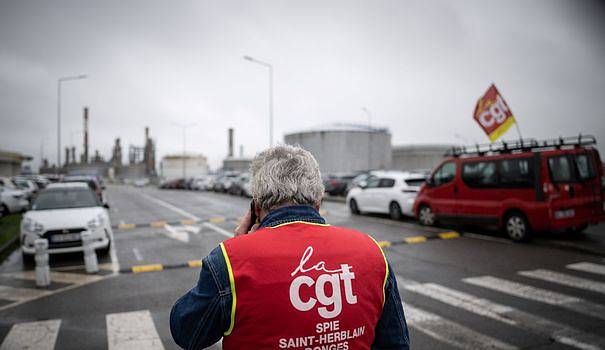 The strike had already been renewed on two sites, until Tuesday for the Normandy refinery located near Le Havre, the largest in France, and Wednesday for that of Donges (Loire-Atlantique).

"The movement has been renewed in the three establishments" of Mède (bio-refinery in the Bouches-du-Rhône), Feyzin (refinery in the Rhône) and Flanders (North), said Saturday morning to AFP Eric Sellini, CGT coordinator for the group, without giving further details.

"The bundles of information that I receive from right to left, there are no worries, it lasts until Tuesday," Thierry Defresne, CGT secretary of the TotalEnergies Europe committee, told AFP on Friday. "Here in Flanders, it's the requisitions that affect the morale of the strikers. If there are no requisitions this weekend, that should help us get through the weekend," he added.

The administrative court of Lille on Friday rejected the appeal for interim relief filed by the CGT which contested the legality of the requisition by the prefecture of striking personnel in this fuel depot.

Several sites intend to continue the movement until they join the day of interprofessional "mobilization and strike" on Tuesday to which the CGT, FO, Solidaires and the FSU have called.

In this perspective, calls for a "general strike" have been launched, particularly in transport (SNCF, RATP, dockers) and in the public service.

A march against “high cost of living and climate inaction”, at the call of Jean-Luc Mélenchon and Nupes, must also take place on Sunday.

The strike on the sites of TotalEnergies is maintained despite the signing of an agreement on wage increases concluded overnight from Thursday to Friday at TotalEnergies with two majority unions, the CFDT and the CFE-CGC.

But the CGT slammed the door of the discussions, not satisfied with the management's proposal.

These were the first negotiations since the start of the strike on September 27.

On the other hand, the strike was lifted successively Thursday and Friday in the only two refineries of the Esso-ExxonMobil group in France, in Fos-sur-Mer (Bouches-du-Rhône) then in Gravenchon, in Normandy, after the conclusion of a pay deal on Tuesday.

But it will take "two to three weeks" to return to a "normal operating situation" at the level of the production of the refinery, completely blocked during the movement, warned the group.

For its part, the government has remained on the line mentioned this week by the President of the Republic, with a "return to normal for motorists expected in the coming week", according to Matignon on Friday evening.

But the opposition accuses the executive of having badly managed this crisis and of being too optimistic.

In the meantime, fuel shortages are a headache for many professions, including farmers.

"All the tractors are empty. I siphoned off the tank of my combine harvester, there were 3 to 400 liters left. This will allow me to feed my cows", explained to AFP Luc Smessaert, operator near Beauvais. .

On Friday, the number of service stations encountering supply difficulties had fallen slightly at midday, to 28.5% against 29.2% the previous evening, according to the Ministry of Energy Transition.

Fuel deliveries from the Donges refinery, near Saint-Nazaire, should take place "sporadically" during the weekend to "ease tensions", the CGT announced on Friday.