Fuels: a "runaway" at the pump before the drop in rebates

In France, nearly 21% of service stations were out of at least one fuel, petrol or diesel, out of a sample of 9,900 stations which served it on September 20 before a long strike in French refineries. 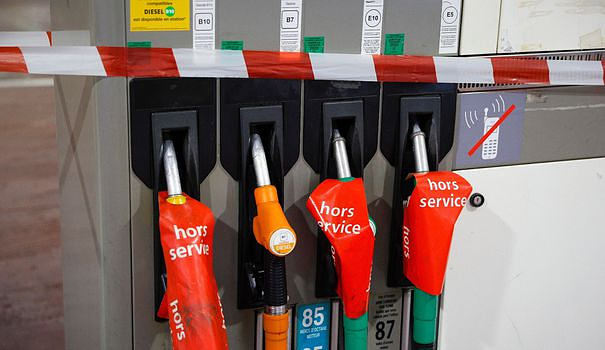 In France, nearly 21% of service stations were out of at least one fuel, petrol or diesel, out of a sample of 9,900 stations which served it on September 20 before a long strike in French refineries.

On October 26, when this strike only affected two TotalEnergies sites, this figure was 14.5%.

"This runaway is only due to the end of the discounts, with motorists who rushed to the pump, but also to the three-day weekend, with one day less supply last week", explains to the AFP Francis Pousse, president of service stations and new energies of Mobilians, a professional union which represents 5,800 traditional stations (excluding mass distribution).

On Wednesday, the discount of 30 euro cents per liter of fuel financed by the State since September 1 will drop to 10 cents, and that of TotalEnergies will drop from 20 to 10 cents. The two discounts of 10 cents will last until December 31.

In 2023, the government plans targeted aid for certain motorists "who are struggling to make ends meet", according to Minister Gabriel Attal.

In continuous decline since mid-October, diesel was displayed last week at the pump at an average national price of 1.8319 euros per liter, or 3.59 cents less than the previous one, according to figures from the Ministry of the Ecological Transition arrested on Friday and published on Monday. Unleaded 95, stable, cost an average of 1.6797 euros per liter, and unleaded 95-E10 at 1.6222 euros was up slightly by 1.74 cents.

On Monday, nearly 13% of French service stations were even completely dry, compared to 9.8% at the end of October, according to data transmitted by the stations on the prix-carburants.gouv.fr site.

In 17 departments, more than 40% of the stations lacked either gasoline or diesel, with strong regional disparities.

And in Auvergne-Rhône-Alpes, 58% of Puy-de-Dôme stations lacked at least one type of fuel, and 46% in the Rhône where the Feyzin refinery (TotalEnergies), the last on strike, did not have suspended the movement only on November 8.

"Feyzin was unblocked last week but you do not instantly restock a set of service stations", underlines Francis Pousse, who wants to be reassuring and refuses to talk about a shortage in France.

"Trucks have started rolling again this morning to restock service stations," he said, and "fuel consumption should slow down significantly from Wednesday" with lower discounts at the pump.

For its part, the government has not communicated figures on fuel shortages since October 21, after media analyzes showed an underestimation of the shortage.