Fuel shortage: what solutions to get out of the crisis?

Queues stretched all weekend in front of many service stations, particularly in Hauts-de-France and Ile-de-France, where stock-outs reached 54. 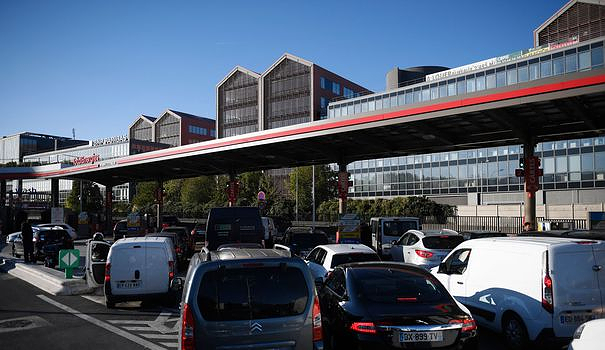 Queues stretched all weekend in front of many service stations, particularly in Hauts-de-France and Ile-de-France, where stock-outs reached 54.8% and 44 .9% of them. Across the country, some 29.7% of stations lacked at least one fuel, against 21% on Saturday, said the Ministry of Energy Transition.

The strike, led by the CGT, has lasted for ten days in refineries and fuel depots, causing supply disruptions. This weekend, TotalEnergies said it was ready to open wage negotiations earlier than expected (normally in November), in the face of pressure from the executive. Prime Minister Élisabeth Borne announced the use of strategic stocks to ensure deliveries.

On the sidelines of a trip to Algeria this Sunday, Elisabeth Borne promised an improvement in the situation. "We have released strategic stocks" of fuel "to supply service stations" and "these deliveries are coming gradually", she said, while in Hauts-de-France the measure has been in effect since Friday. "The measures we have taken have made it possible to increase deliveries by 20% compared to the usual flows," said the head of government, saying that she was following developments "very closely".

These Strategic Petroleum Reserves (RSP) are created to deal with energy emergencies. They are all the more significant as the oil consumed in France is almost entirely imported (except 1%). Originally, they were created in the 1920s, for military reasons, then took on a more strategic dimension after the first oil shock of 1973.

At a minimum, strategic stocks must meet a demand of 90 days, or three months. Today, France has approximately 18 million tonnes of oil reserves. They are stored in 89 storage sites across France, but sometimes distributed unevenly. "The distribution of storage capacities on the metropolitan territory is not homogeneous" and "the Normandy and Paca regions alone represent 48% of national storage capacities", indicated the Ministry of Energy Transition in a press release to the beginning of summer. The last time the country used these strategic stocks was in 2016, during a protest movement in refineries. Three days of reserve had been used.

The executive's calls for conciliation have multiplied in recent days. On Friday, Emmanuel Macron called on oil groups and unions to "responsibility". A message taken up by the head of government, while yesterday, the Minister for Ecological Transition, Agnès Pannier-Runacher insisted on "reaffirming the government's very firm appeal to the leaders and trade unions of Total and Esso. A solution must be found without delay within the framework of social dialogue, which must take place within companies."

On Sunday, TotalEnergies thus proposed to bring forward its annual wage negotiations to October, responding to the outstretched hand of the CGT, on the condition that the blockages end in refineries and fuel depots. These negotiations "will make it possible to define how employees will be able to benefit, before the end of the year, from the exceptional results generated by TotalEnergies, while also taking into account inflation for the year 2022", assures the group, which manages nearly one-third of service stations in France. On Saturday, the CGT said it was ready to talk only about salaries, and to leave hiring questions aside for the moment. The union is demanding a 10% increase in wages: 7% for inflation, 3% for the sharing of wealth, the energy giant having made 10.6 billion dollars in profit in the first half of 2022.

The Esso-ExxonMobil group indicated Sunday evening in a press release its intention to bring together "the four trade union organizations representing staff", as of Monday. The group, whose two refineries in France are shut down, says it is "convinced (that) the quality of the social dialogue engaged and uninterrupted with the representative organizations of the staff will make it possible to quickly end the conflict".

On the right and on the extreme right of the political spectrum, there are a few parliamentarians who brandish the radical measure of the requisitions of striking personnel. For the candidate for the presidency of the National Rally (RN) Jordan Bardella, the demands of the employees "are perfectly legitimate". Asked about France Inter on Sunday, the MEP however warned that "the prolonged paralysis of the country could have cataclysmic consequences". "No solution should be ruled out" and "in the extreme case where we are unable to unblock the situation and TotalEnergies assumes a blocking strategy, then I think that indeed, we should not rule out requisitioning to allow the Continental French to work on," he said.

A measure that the boss of the senators Les Républicains (LR), Bruno Retailleau, would like to see implemented. “It has only lasted too long”, he was annoyed at the microphone of RTL on Sunday. "A union cannot take France hostage". The right-wing senator is asking for "a requisition so that we can release the production force of our refineries". "We must get out of the culture of the strike, the strike culture".

The requisition of refinery employees occurred in 2010, under the presidency of Nicolas Sarkozy. Prefects had requisitioned by arrest employees of several refineries on strike against the pension reform led by the government of François Fillon. However, this is an exceptional remedy for employees in the private sector, which can be taken “in the event of a observed or foreseeable breach of public order”.