Fuel crisis: where are the negotiations at TotalEnergies?

TotalEnergies is starting to drop ballast on wages. 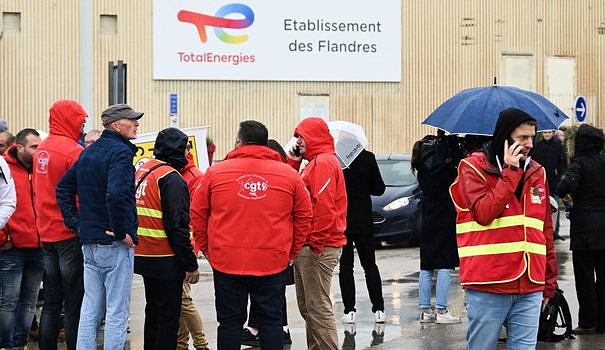 TotalEnergies is starting to drop ballast on wages. While its employees have been on strike for 17 days in the refineries, the French oil group announced, Thursday, October 13, in a press release that it was "willing to consider a budget for 2023 wage increases on the basis of 2022 inflation", i.e. "6%" but still conditions the opening of negotiations on the lifting of blockages. TotalEnergies also plans to distribute in December "to all of (its) employees worldwide" an exceptional bonus equivalent to one month's salary, "subject to salary agreements".

The CGT demanded a 10% wage increase to offset the expected annual inflation of between 6 and 7% and allow employees to benefit from the enormous profits reaped by the oil group during the energy crisis caused by the war in Ukraine. At TotalEnergies, the strike was renewed Thursday morning "by a very large majority" in five sites involved in the movement according to the CGT coordinator for the group, Eric Sellini. "We don't negotiate in the media," he reacted to the group's new proposal. "The management continues to despise the organizations and the strikers", adds the coordinator with AFP, affirming that "it will not improve the ambient climate".

The CGT must "seize the hand that has been extended" to negotiate, said Thursday on RTL the Minister of the Economy Bruno Le Maire, adding that the group, which reaped some 10.6 billion in profits in the first half 2022, in particular thanks to the rise in energy prices, had "the ability" and "therefore the duty" to do so. He was joined by the Minister for Energy Transition Agnès Pannier-Runacher, who invited Thursday morning on RMC, "Total to take the lead and ensure that everyone comes back to the negotiating table".

Fuel shortages have taken hold in several regions, putting the nerves of motorists on edge. According to the Ministry of Energy Transition, 30% of service stations were blocked nationally on Thursday, even more in certain regions such as Hauts-de-France. After the requisition of four personnel on the site of Esso-ExxonMobil in Port-Jérôme (Seine-Maritime) where the strike is renewed, the government launched on Thursday the requisition of the personnel of the TotalEnergies de Flandres fuel depot near Dunkirk (North ).

In response, the CGT is betting on an extension of the movement in favor of wage increases and is preparing to organize an interprofessional strike day on Tuesday, despite the dissatisfaction of part of the public. "The fact of requisitioning, it set fire to the powder", accused the secretary general of the CGT Philippe Martinez on BFMTV Thursday morning, claiming to have told Prime Minister Elisabeth Borne that the government was doing "bullshit".

The CGT energy federation meanwhile called on Thursday for "the widening of the strike in all energy companies". Several nuclear power plants were hit on Wednesday by strikes over wage demands. The public service, the food industry, the railway workers could join forces with those of the refiners. Solidaires should decide this Thursday afternoon to call for a "strike next Tuesday for salary increases", according to its co-delegate general Simon Duteil. On the other hand, there is little chance that the CFDT or the CFTC will join the movement, one and the other having dissociated themselves this weekend from the strikes at TotalEnergies, qualified as "preventive".

"The call to strike, what does it change in the end? It doesn't change anything," said CFDT number one Laurent Berger on Thursday on France Inter, once again calling on the parties to negotiate. "The requisition is escalation," he regretted. “We are going to speed up our mobilization process”, abounds Céline Verzeletti, confederal secretary of the CGT. Many union activists will be like her present at the demonstration "against the high cost of living" organized by Nupes on Sunday, before perhaps the organization of a joint day of left-wing parties and unions later.

According to an Elabe poll for BFMTV, only a small majority of French people approve of the mobilization of TotalEnergies and ExxonMobil employees (42% approve, 40% disapprove, 18% are indifferent). Is the CGT not afraid with these strikes and demonstrations of alienating the French, many of whom are overwhelmed with the difficulties of refueling? "Of course, when we queue for an hour at the gas station, we get angry. But the question of sharing wealth is on everyone's mind," argues Céline Verzeletti.