Exciting nature, huge waterfalls, unforgettable rock formations: The Southwest of the USA is a paradise for nature lovers and home to numerous classic US national parks. 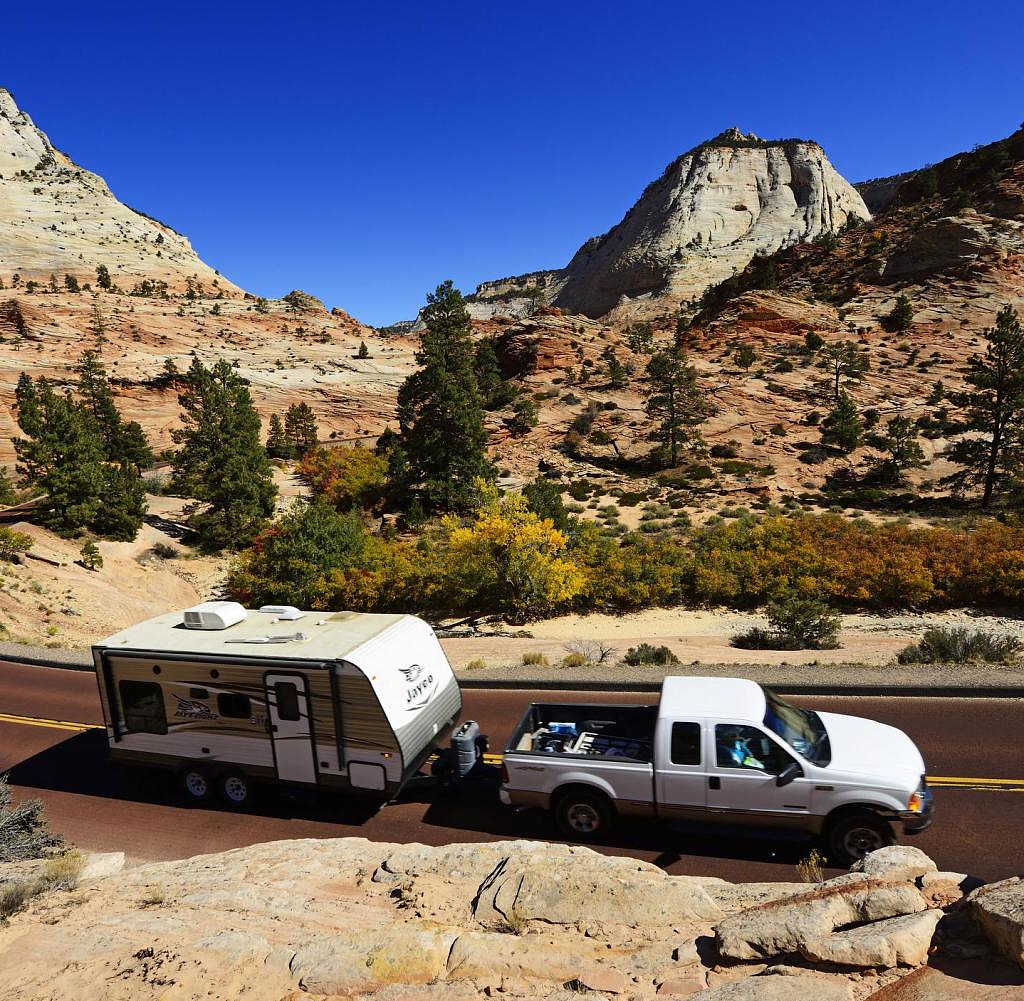 Exciting nature, huge waterfalls, unforgettable rock formations: The Southwest of the USA is a paradise for nature lovers and home to numerous classic US national parks. Whether Zion, Bryce Canyon, Arches or Monument Valley: they are all powerful and deeply impressive natural wonders. The best way to explore them from Las Vegas is by motorhome.

At first glance, this is of course an unusual start for a trip into nature: "The Strip", the legendary gambling area in Las Vegas, owes its birth to the legalization of gambling in Nevada in 1931. The modest Mormon town quickly mutated into a Mecca for gamblers. Nothing is real here, everything is artificial. Illusion is trump.

If you want, you can tie the knot like 60,000 couples from all over the world every year - with a fairytale carriage or as a drive-through: getting married as quickly as driving a car through the car wash. The city is also the ideal starting point for our motorhome trip to the national parks in the southwest of the USA.

With a mobile home we want to visit the most beautiful national parks. But even such a small round through the southwest is already scratching the 2000 kilometer mark. We chug to Utah via Saint George and steer into the monumental rock cinema of Zion National Park. The Towers of the Virgin form a massive rock face. Next to it tower dozens of temple-like structures made of bright red sandstone.

We shoulder our backpacks and tackle the Canyon Overlook Trail. After just a few minutes, the fairytale-like landscape rests in quiet solitude. The hike bundles unimagined views into the dramatic rocky outcrop of Mount Zion in two hours.

The pass road to Brian Head climbs several times to almost 3000 meters. In Cedar Breaks National Monument we lace up our hiking boots again. The Ramparts Trail is a treat: at 3100 meters above sea level, it always leads along the abyss of the 600 meter deep Jericho Canyon. Finally, at Spectra Point, it reveals a direct view of a sea of ​​pink, purple and ocher stone needles, twisting columns and jagged pinnacles.

The next stop is Bryce Canyon. Here, too, erosion has been tinkering extremely creatively for ten million years on a bizarre magical landscape of so-called hoodos - narrow rock needles that rise up to 45 meters into the sky like totem poles.

Continue on Highway 12, one of the most beautiful roads in America. Red cliffs, winding canyons, petrified forests - the view out the window reveals a perpetual open-air geological museum.

And at the end of the highway is Capital Reef National Park, where you'll find even more colorful cliffs, soaring spired columns and graceful rock arches. The best way to get to know them is on horseback.

Moab is number one in the Rockies for outdoor activities. Extreme climbers cavort in the overhanging granite walls. Kayaks and rubber boats dance on the whitecaps of the Colorado River. The mighty Colorado River, which crosses Utah from northeast to southwest, is also responsible for much of the fantastic canyons.

The sea of ​​hills above made of petrified sand dunes is considered the Mecca of mountain bikers. Above all, the 9.6-mile (approx. 15 km) long "Slickrock" circuit right on the outskirts of Moab enjoys cult status.

In addition, Arches and Canyonlands, two of the most beautiful national parks in the United States, are located just outside the city of Moab. Sandstone arches await in Arches National Park in an almost inflationary accumulation.

Fortunately, the most famous, the free-standing Delicate Arch and the Landscape Arch with an incredible span of 90 meters are only accessible to hikers. If you organize a backcountry permit with the helpful rangers in the Visitor Center, you can hike your own stone arches far away from any hustle and bustle with a tent, sleeping bag and enough water.

We continue south to Monument Valley. Every child knows the deep red sand dunes and the mighty plateau mountains from countless western classics and commercials. Once upon a time, Hollywood's warhorses rode across the prairie and shaped a completely wrong image of the Indians worldwide.

The land has belonged to the Navajos since 1958. With a 4x4 pickup they organize tours through what is probably the most famous film set in the world. Jane, a Navajo, is behind the wheel of the all-terrain vehicle. Live on the microphone, she reports for three hours without a period or comma, responds to individual photo requests and takes us over the treacherous slope into a mercilessly kitschy sunset.

We end our RV loop the way it started: in Las Vegas. When you arrive back in Las Vegas after two weeks in great, lonely natural landscapes, the glittering city seems even more unreal. We give ourselves the contrast program to the canyons between the gigantic hotel temples.

Out in the wilderness, the Milky Way's twinkle is almost surpassed by the billions of lights on Las Vegas Boulevard. The best way to explore the Strip is on foot. No problem, we are well prepared for that after this trip!

The camping industry has gained almost two million newcomers in the last two years. 14 million Germans tour the streets in motorhomes, caravans or vans. But if you order now, you need a lot of patience.