From the American dream to anonymous death, the tragic destiny of migrants in Texas

"It's disastrous around here", describes the sheriff, who patrols the small rural county of Brooks in Texas, a few tens of kilometers from Mexico. 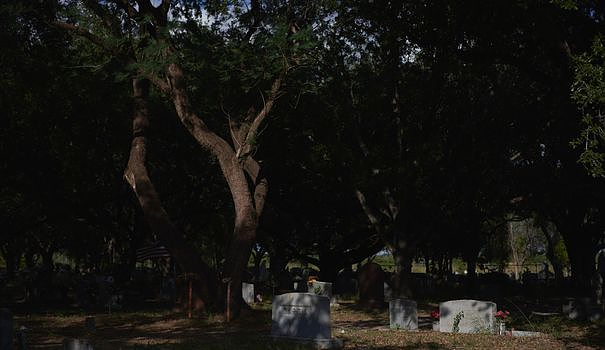 "It's disastrous around here", describes the sheriff, who patrols the small rural county of Brooks in Texas, a few tens of kilometers from Mexico.

"We started to identify the corpses from 2009," he told AFP, pointing to twenty volumes, where more than 913 cases of death are listed.

But according to him, the real human toll is much greater.

“I would multiply that by five, maybe even ten, the number of bodies that will never be found,” he adds.

The United States recorded a record 2 million border arrests during the year, as immigration emerged as one of the main issues debated ahead of the November 8 election. At least 700 people died during these crossings.

To avoid the checkpoint at Falfurrias, Brooks County's main town, migrants are led by smugglers to vast farms where dense vegetation and heat can quickly prove fatal.

In the municipal cemetery of the border town of Eagle Pass, about forty plaques are placed next to a small American flag and bear the mention John or Jane Doe, used in the United States for people of unknown identity.

So many men and women who saw their American dreams come to an end in unmarked graves.

On the other side of the city, migrants continue to arrive, choosing to risk their lives to escape the poverty and terror of their countries of origin.

"It was agony," says Alejandra, a 35-year-old Colombian who crossed the Rio Grande to reach Texas despite not being able to swim. "But it was scarier to go back."

Alejandra confides that she needed asylum because of the danger of organized crime she faced in Colombia.

"If we go back, they will kill us," she says, looking at her three children.

Corinne Stern, head of the main morgue in the region, explains that "the most common cause of death is hyperthermia or dehydration".

"Until about five years ago, (the border) occupied about 30% of my time... Today, it occupies about 75%," explains the doctor.

The morgue is impeccably clean, but the smell of decomposing bodies is omnipresent.

Because sometimes there is not much left of the bodies.

"If it's very hot, your body decomposes in 72 hours, and the animals shred the rest," says Urbino Martinez.

“We have already found human bones in the den of a rat,” adds the sheriff.

The vast majority of corpses found at the border have no identity papers on them, explains Corinne Stern, as she examines the skeletal remains of a still-clothed female body.

A small backpack is attached to the corpse. When the doctor lifts it, two colored lollipops fall from it, contrasting with the earthy ocher that covers the clothes and the bones.

DNA samples are being taken in an attempt to identify her, but for now she will be labeled as another Jane Doe, one of 250 Corinne Stern has cared for this year.

For Eduardo Canales, 74, dying in anonymity is too cruel an end.

To remedy this, in 2013 he had water stations installed around farms to prevent migrants from drinking water from cattle troughs, which is toxic to humans.

It also provides barrels with location coordinates and a phone number to call for help.

But when he started getting calls from families looking for missing loved ones, he decided to expand.

"For me, the most important thing is that families can move on," he says.

"Families keep looking, they never give up. They keep asking where is my wife, my brother, my daughter?"

A partnership with the University of Texas has made it possible to exhume dozens of corpses and identify them using their fingerprints.

This collaboration has reduced the number of unmarked graves in Brooks: of the 119 migrants found in 2021, 107 have been identified.

"But many others die and disappear without us ever finding them," laments Eduardo Canales.

"Here, the only constant is death".