From Chaplin to Clinton – they all came to the “Grand Hotel d'Angkor”.

As soon as you arrive at the Grand Hotel d'Angkor, images of old Indochina come to life. 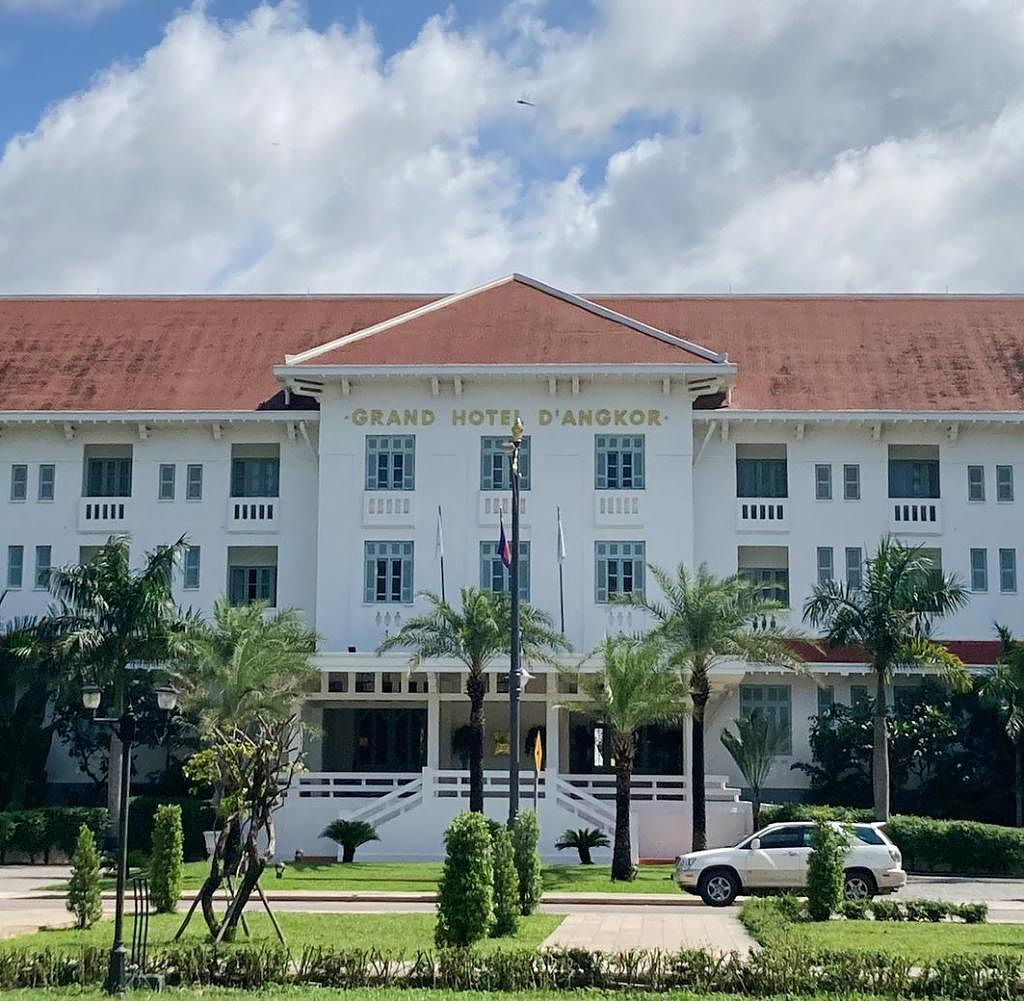 As soon as you arrive at the Grand Hotel d'Angkor, images of old Indochina come to life. The colonial-style building exudes history from every pore - and if it could speak - it would have a lot to tell.

In the mind's eye, decorated elephants trumpet and wait with their mahouts for the illustrious guests, butlers in traditional Cambodian robes escort elegant ladies in white robes and men with pith helmets out of the entrance gate, while horse-drawn carriages circulate on the gravel driveway.

Opened in 1932 in the small town of Siem Reap, the grand hotel, together with its former partner Hotel des Ruines, is one of the oldest in Cambodia. Simultaneously with the reopening after the Corona lockdown, the famous building recently celebrated its 90th birthday with great pomp - complete with fireworks, light shows and a dinner in the Prasat Kravan temple from the tenth century.

While the Royal Ballet of Cambodia danced, which, like the temple itself, is a UNESCO World Heritage Site, the complex shone in a magical light. The invited guests were cooked with the original menu that was served at the Grand Hotel for Christmas 1932. Even the king had a princess of the court read a personal message.

The location of the hotel could not be more ideal: a few kilometers away in the middle of the jungle are the breathtaking temple complexes of the Khmer kings - including Angkor Wat, the largest temple complex in the world, the remains of Ta Prohm overgrown with gigantic roots and the Bodhisattva temple carved in stone. Faces of Bayon.

The Frenchman Henri Mouhot came across the ruins hidden in the jungle in 1860 and triggered a wave of travel by researchers, photographers and glamorous world travelers with his reports. "All of high society wanted to see the sights for themselves and needed a place to stay," the hotel's website states.

To this day, the monumental temples are the highlight of their Cambodia trip for many tourists - but the selection of overnight accommodations in all price ranges in Siem Reap has grown enormously over time.

The Grand Hotel meanwhile guards secrets, stories and anecdotes, all closely linked to the Angkor temples. "When I put my ears to the walls, it really is as if the hotel is talking to me, like a rustling seashell on the beach," says current general manager Dennis de Groot.

"What particularly stands out for me is the visit of Charlie Chaplin, who was here in 1936 on a secret honeymoon with Paulette Goddard, his co-star from Modern Times," says the Dutchman.

A black and white photo shows the couple dressed all in white at the Angkor ruins. The well-known archaeologist and art historian Victor Goloubew accompanied the visit of the silent film comedian and the US actress.

Anyone who would like to learn more about the eventful history can contact Saravann Mouth during their stay. The in-house historian gives lectures and guides interested guests through the corridors, halls and suites of the grand hotel. “This hotel is my life, I owe everything to it – I even met my wife here,” he says.

Mouth shows the guests an antiquarian book from 1936: The Grand Hotel is mentioned for the first time in "Cambodian Glory". The British writer H.W. In it, Ponder describes it as a “tall, dazzling white building” that would also have fitted “after Nice or Monte Carlo”. “This was the hotel. Everyone who visited Angkor stayed here.”

Since 1994, the hotel has belonged to the exclusive Raffles hotel chain, which is named after the explorer and founder of Singapore, Sir Thomas Stamford Raffles. After an extensive renovation, the grand hotel was ceremonially reopened in 1997. The elevator with wooden doors, which takes guests to the upper floors at a leisurely pace, dates back to the early days.

According to the website, he has promoted “movie stars, prime ministers, famous first ladies and sultans”. In the evening, culinary specialties await you in the "1932" restaurant, after which the "Elephant Bar" invites you to the in-house Negroni.

But there were also dark times in the long history of the colonial building - especially during the years of the communist Pol Pot regime, which, with its Khmer Rouge, plunged the whole country into endless suffering and, according to estimates, cost the lives of almost two million people.

When Pol Pot's guerrillas invaded Siem Reap in 1975, no more guests were staying at the Grand Hotel. Koy Savauu, who was 29 at the time and worked as a pastry chef, told the Los Angeles Times about the beginning of the horror in 1998. The Khmer Rouge gave hotel workers and citizens five days to leave Siem Reap and go to the countryside, Savauu said.

The rebel army consisted mostly of uneducated teenagers. "They had never seen a dining room, let alone an elevator like the one in the Grand Hotel. they gaped. They used the bedroom furniture for firewood," he said. At that time, almost all documents relating to the history of the hotel were destroyed, says general manager De Groot. Vietnamese troops only put an end to the terror regime in 1979.

When the hotel was later taken over by Raffles, Koy Savauu went back to work as a confectioner in the kitchen. Many of the staff have remained loyal to the hotel over the years and through all crises.

Whether despot or pandemic: the grande dame has survived everything so far. Even if there are no more elephants in front of the door today, the time jump is perfect for a moment when the concierge opens the front door.

He wears a shimmering golden headgear and a traditional sampot, a cloth that Cambodian men drape like trousers on festive occasions. With a bow, he hands the guests a fragrant, ice-cold towel. And for a magical moment, it's suddenly again...1932.

Getting there: It is recommended to travel via Bangkok. There are direct flights with Thai Airways from Frankfurt/Main. Various airlines fly directly to Siem Reap from Bangkok (such as Thai Air Asia and Bangkok Airways). The flight takes about an hour.

Entry: Double vaccinated travelers only need their vaccination certificate and a tourist visa. This can be applied for on site or online in advance (evisa.gov.kh). Anyone who is not or not fully vaccinated must do a rapid corona test on arrival. The rules can change depending on the infection situation, it is recommended to get detailed information (auswaertiges-amt.de).

Best travel time: December and January, then there is the dry season and it is less hot. However, this is also the high season for the temples of Angkor. The months of April and May should be avoided when it is particularly hot.