Frankfurt gets an important point against Tottenham, Leverkusen loses in Porto

Lean food instead of a lavish football festival: Eintracht Frankfurt missed out on their first home win in the club's history in the Champions League at the second attempt, but kept every chance of progressing with a goalless draw against Tottenham Hotspur. 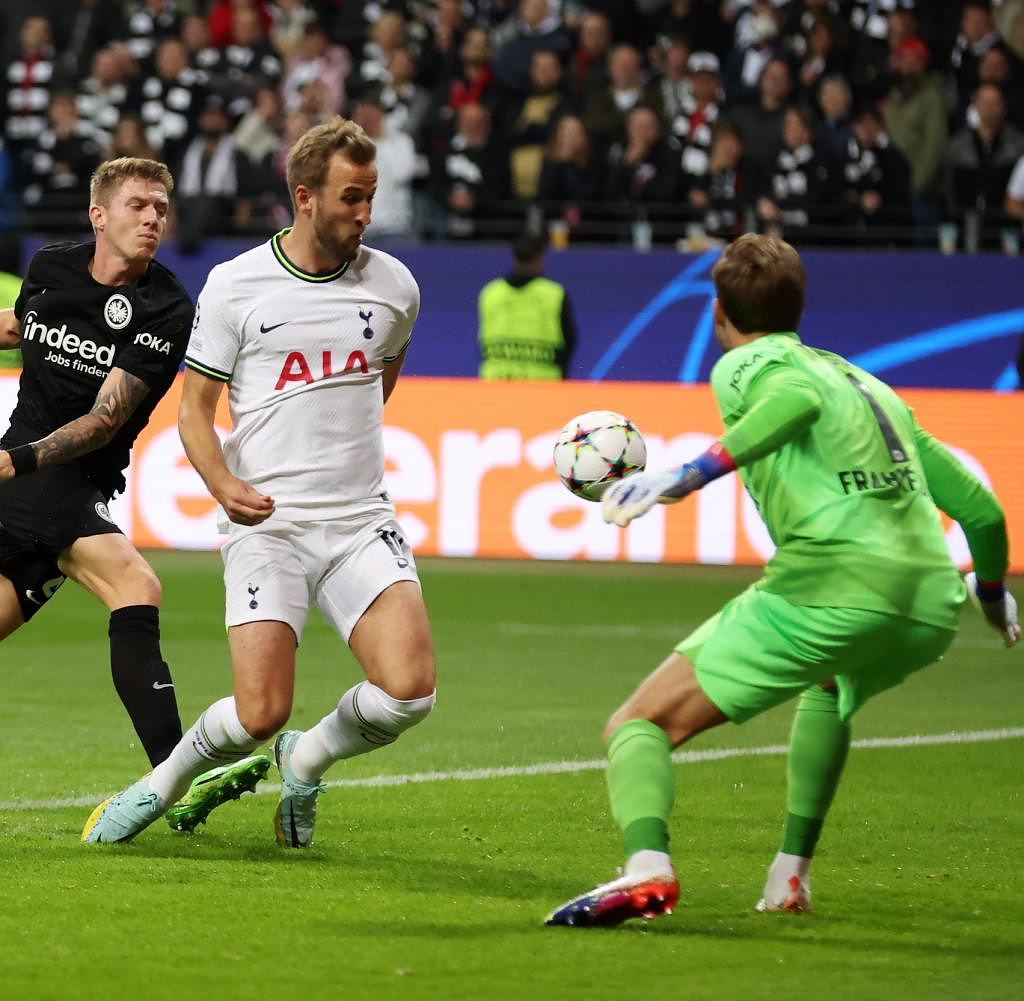 Lean food instead of a lavish football festival: Eintracht Frankfurt missed out on their first home win in the club's history in the Champions League at the second attempt, but kept every chance of progressing with a goalless draw against Tottenham Hotspur. In front of 50,500 spectators, the Hessians deserved a point in the duel with the third-placed team in the English Premier League around star striker Harry Kane on Tuesday evening due to the improvement in performance in the second half.

With four points each, both teams are tied in Group D behind leaders Sporting Lisbon (6), who lost 4-1 at Olympique Marseille (3). Eintracht will travel to London for the second leg as early as next week.

"Tottenham is of course the favourite, this offensive is probably one of the best there is in Europe," said Eintracht coach Oliver Glasner before kick-off: "It is important to control them and the few spaces that Antonio's team have Conte gives you to use effectively.”

In fact, Tottenham showed their much-vaunted offensive power right from the start – especially Kane. The England international narrowly missed the ball twice (12th and 25th) in front of goal, and his long-range shot (28th) was not far off the mark. But Eintracht didn't hide at first either, in a brief urge phase, midfielder Sebastian Rode (18th) missed, whose shot was deflected to a corner.

Overall, Eintracht, in which the recently rested Djibril Sow replaced the injured Mario Götze, as expected, was initially not powerful enough despite all efforts. Also because striker Randal Kolo Muani, who Glasner granted a lot of freedom as an "instinct footballer" on the offensive, was largely taken out of the game by the guests' defense. Daichi Kamada, who had taken over the Götze position in attacking midfield, didn't have enough accents either. In addition, the bad passes that inhibited the flow of the game increased.

Tottenham was different: When they won the ball, they went straight and dangerous again and again. Shortly before the half-time whistle, former Bundesliga pros Heung-Min Son (40') missed good opportunities to take the lead at half-time after a fine back-heel from Kane and Ivan Perisic (43').

After the change of sides, the home side came out of the dressing room with more momentum, which was immediately rewarded with a great chance: Sow chipped the ball perfectly into the penalty area, where Ansgar Knauff brought it straight onto goal from the air. But guest goalkeeper Hugo Lloris parried. After an hour, Jesper Lindström went wide in a promising position. The Premier League third was defensively vulnerable.

But that also applied to Frankfurt, especially with Kane and Son, the defenders around old star Makoto Hasebe had their problems. After less than an hour, the disappointing Kolo Muani had to leave the field for Rafael Santos Borré. As the game progressed, both teams slowed down a bit, which meant there were few chances.

In the parallel game, the focus was on the coach: Because Gerardo Seoane is more at risk than ever: Bayer Leverkusen also messed up in the Champions League after the 0: 4 debacle at FC Bayern and thus increased the pressure on his coach, who was in serious trouble.

The penultimate of the Bundesliga lost a sometimes crazy game at FC Porto 0: 2 (0: 0) and missed a big step towards the round of 16. Zaidu (69th) and Galeno (87th) scored the goals.

However, the team's performance and attitude over the long haul were arguments for Seoane getting his job final against FC Schalke on Saturday. If the Swiss player doesn't win with the Werkself against the promoted side either, his time in Leverkusen will almost certainly come to an end.

The whole emotional rollercoaster of feelings for Seoane culminated just before the break when Porto scored, the goal was disallowed, Bayer received a hand penalty and Patrik Schick missed it (45). A goal by Callum Hudson-Odoi had previously been disallowed (15'). To make matters worse, Jeremie Frimpong also saw yellow-red after repeated foul play (88.)

Seoane had calmed down after club boss Fernando Carro had publicly stated that the club was “not unprepared for a change of coach. He finds it "only professional," said the 43-year-old and assured: "Personally, I can handle this situation well."

His team, who changed three positions, quickly tried to control the game and tried to gain security through possession of the ball. In front of the eyes of the longtime head of sport Rudi Völler, who accompanied the team in his new function as a member of the shareholders' committee, Frimpong and Moussa Diaby were active on the right flank. For three minutes Bayer seemed to have their reward quickly as Hudson-Odoi volleyed a nice play from the far post. But after looking at several TV pictures, the English referee team found that Robert Andrich had previously played a foul when winning the ball.

After that, the game flattened out until events took a turn for the worse shortly after the break. First of all, the Bayer keeper Lukas Hradecky, who had often made a mistake, made a strong save against Mateus Uribe (40th), then Schick failed at Diogo Costa (41st), in return Mehdi Taremi scored the supposed 1-0 for Porto. Because of a handball by David Carmo in his own penalty area, the goal was not only disallowed, but instead Bayer were awarded a penalty – which Schick missed.

To make it even more bizarre, the Czech had also missed a penalty in the international match against Portugal ten days earlier. And who was there in the gate? Diogo Costa. At that time, Schick had shot over the goal, this time the Portuguese held. Instead of 0:1 or 1:0 it was 0:0 at the break.

After the break, the game became wild and torn in front of 42,399 spectators. Instead of great chances to score, there were now only four yellow cards within ten minutes as excitement. Bayer never recovered from Zaidu's goal.

Wendell was unlucky for the Portuguese. The left-back, who played a total of 250 competitive games for Bayer between 2014 and 2021, had to have his foot treated after a foul by Adam Hlozek in the 12th minute. 20 minutes later his own goalkeeper rammed him in a rescue attempt. The Brazilian lay dazed on the floor but bounced back again and lasted until the 63rd minute.

‹ ›
Keywords:
Bayer 04 LeverkusenEintracht FrankfurtSeoaneGerardoGlasnerOliverTottenham HotspurFC PortoChampions LeagueBayernFC Porto Bayer LeverkusenFussballFußball
Your comment has been forwarded to the administrator for approval.×
Warning! Will constitute a criminal offense, illegal, threatening, offensive, insulting and swearing, derogatory, defamatory, vulgar, pornographic, indecent, personality rights, damaging or similar nature in the nature of all kinds of financial content, legal, criminal and administrative responsibility for the content of the sender member / members are belong.
Related News