Franco-British warming: Macron is finally a "friend" for Liz Truss

The two leaders, who were seeing each other for the second time in Prague after a first exchange in September on the sidelines of the UN General Assembly in New York, have relaunched the bilateral relationship, badly mistreated under Boris Johnson, the predecessor of Liz Truss. 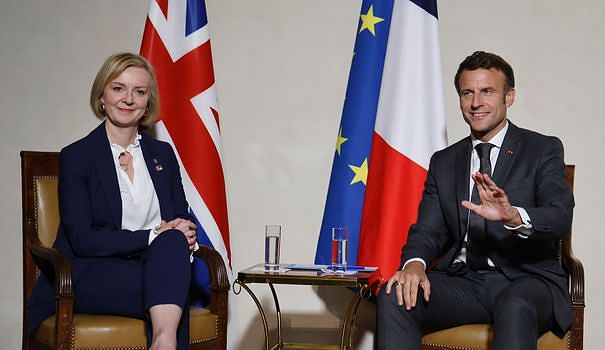 The two leaders, who were seeing each other for the second time in Prague after a first exchange in September on the sidelines of the UN General Assembly in New York, have relaunched the bilateral relationship, badly mistreated under Boris Johnson, the predecessor of Liz Truss.

"He is a friend," the head of the British government told reporters from Prague, where the first summit of the European Political Community was held.

"I work very, very closely with President Macron and the French government," said Ms. Truss, herself in the grip of strong political turbulence just a month after arriving in Downing Street.

"We are talking about how the UK and France can work more closely together to build more nuclear power stations and ensure both countries have energy security in the future," she said. to the hydrocarbon crisis that is shaking Europe, which has so far been too dependent on Russia.

Exit the crisis caused in September 2021 by the strategic alliance of the British, Americans and Australians which caused France to lose a mega-submarine contract with Canberra.

The Russian offensive in Ukraine has since passed through there, with its economic and financial repercussions, pushing the Europeans to close ranks, alongside kyiv.

"We are both very clear that the enemy is Vladimir Putin, who through his appalling war in Ukraine has threatened freedom and democracy in Europe and has driven up energy prices to which we all owe face today," said the Prime Minister.

At the end of August, the conservative Liz Truss - then head of diplomacy and candidate for Downing Street - had created controversy by refusing to say whether Emmanuel Macron was a "friend" or an "enemy". "The jury is still out," she said.

"If we are not able, between French and British, to say if we are friend or enemy (...) we are going to serious problems", had replied Emmanuel Macron.

"The United Kingdom is a friendly, strong and allied nation, whoever its leaders are," he added.

Since then, the United Kingdom has tried to calm things down while numerous disputes oppose the two countries, in particular the management of post-Brexit files, such as fishing or Northern Ireland.

Same tone on the side of Paris, where the Prague meeting between the two leaders is described as "positive" and "quite rich", Mr. Macron hoping for "a new phase" in relations between the two countries.

After their meeting, Liz Truss and Emmanuel Macron agreed to "deepen cooperation on illegal migration within the limits of international law, tackling criminal groups that traffic in human beings across the 'Europe, which ends in dangerous journeys across the English Channel', according to a joint statement.

Faced with the looming energy shortage and the challenge of ecological transition, the two countries have also pledged to "intensify their cooperation in the field of civil nuclear power", while London is planning up to eight new reactors by 2050.

"They have confirmed the full support of the French and UK governments for the new nuclear power plant at Sizewell and they expect the relevant bodies to finalize the relevant agreements in the coming month."

The Johnson government gave the green light in July to the financing of the costly EPR Sizewell C power plant project, carried by the French group EDF, and estimated between 20 and 30 billion pounds according to the British press.

Finally, the two leaders agreed to meet within the framework of a Franco-British summit in France in 2023 to "advance a renewed bilateral agenda". The last dates back to 2018.