Francisco Ramirez (1977), is the president and founder of the Granada Integra Sports Association. 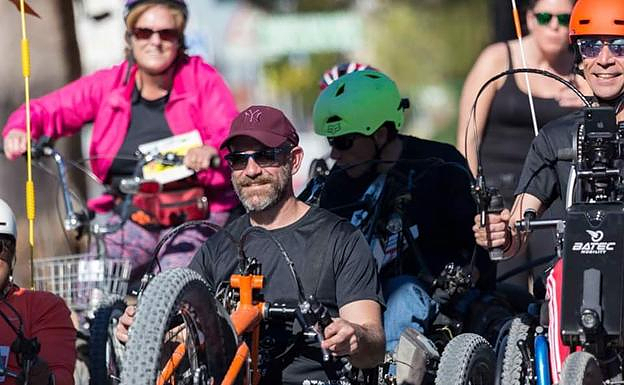 Francisco Ramirez (1977), is the president and founder of the Granada Integra Sports Association. He was born in Churriana de la Vega and lost his right leg in a work accident at the age of 20. He is a member of the association and works to promote adapted sports in the province.

- What is the Granada Integra Sports Association (GISA)?

It is an association that promotes adaptive sports. Because there wasn't any opportunity for people with disabilities to participate in adapted sports in Granada or the province, it was created. Only skiing was available, which is easier. Because we didn't need any adapted material, we are committed to promoting races. We are now trying to play tennis and paddle tennis. Also, we are betting on long-distance adapted hiking routes. In some towns, we also began to play exhibition basketball.

When was the association founded?

-After CD Arrayan was destroyed due to lack support from institutions, four friends with disabilities formed the association and began to move around 2013.

-What was the first thing you did?

-We started the Diputacion circuit as disabled. There were some races that were not accessible and people with different abilities in the series. It was unfair, I thought, that he had the opportunity to compete against someone with a visual impairment. There were many concerns. That's why the Churriana Integra Race was created. It claims different speeds, categories, and ways to understand the sport.

-The fifth edition of the Churriana Integra race is already underway.

-Yes. There have been ups and downs. Although people were very involved in the first editions of the magazine, it was difficult to keep the numbers steady each year. We are happy that there were more than 300 people last year and that the number is increasing this year. We have created an inclusive racing circuit in Pinos Puente and Benamaurel thanks to this initiative. With the help of the Diputacion, the circuit allows people with functional differences to participate in accessible races within their own category. We started to do more.

Have you noticed that adaptive sports are more commonly understood?

-The neighbors understood the situation from the beginning. The problem is that very few people with disabilities live in every town. This is because most diseases are eradicated. Those who are left behind are often disabled from work accidents or traffic accidents. We are scattered. There are very few physically disabled people in Churriana. In other towns, they can be counted on one hand. We encourage people to get involved in sports because they are essential. We have three types of functional diversity in our careers: intellectual, sensory, and physical. Each category is broken down into different categories.

- You need financial aid. We now want to present a proposal to purchase two "handbikes". Our borrowing bank will grow with the profits from these races. Three hybrid handbikes were purchased last year for use in the mountains. However, they are front-wheel driven and don't work well on slopes. The cost of a new model is prohibitive so we are looking for alternatives. All the money we collect goes to our loan bank. We also use it to purchase expensive material for our partners. Multisport chairs are also available for tennis, paddle tennis and basketball. Material is essential for each activity. These materials can be very costly.

-Having an extensive bank of materials to help those in need and the ability to organize beautiful events. There are some people who are obsessed with the Camino de Santiago. However, in Andalusia, there are many routes that can be accessed, such as Cordoba and the Oil route. These routes allow for several days of hiking in beautiful areas. The ultimate goal is to move and play sports.

Have you ever been able to do more sports?

We have had tennis exhibitions. However, not enough people are willing to play this sport. They need more speed and a bigger court. We tried to organize a championship for paddle tennis but it rained so we cancelled it. Our basketball team currently plays in the Second Division (BSR) of wheelchair basketball. We were third in the Final Four in Zaragoza and are still in the hunt for promotion.

Are you satisfied with the first year of the association?

We are happy that many people with disabilities can now get material. The Granada City Council offered a variety of adaptive sports activities but it wasn't carried out when you signed up. Churriana De la Vega was the only City Council to support us. She did the Churriana Integra run with us and is a sponsor for the basketball team. It is shameful that other bodies don't support inclusive sports enough.

‹ ›
Keywords:
FranciscoRamirezCarreraChurrianaIntegraReivindicaDistintasFormasEntenderDeporte
Your comment has been forwarded to the administrator for approval.×
Warning! Will constitute a criminal offense, illegal, threatening, offensive, insulting and swearing, derogatory, defamatory, vulgar, pornographic, indecent, personality rights, damaging or similar nature in the nature of all kinds of financial content, legal, criminal and administrative responsibility for the content of the sender member / members are belong.
Related News